My impression is that women are relatively well-represented in phonology, maybe more so than in other sub-disciplines of linguistics. A little piece of encouraging data on this comes from the 2015 Annual Meeting on Phonology, in which 18/27, or 66%, of the authors of oral presentations , including plenaries but not tutorials, were women (I was unable to identify the gender of one author). I’d be very interested if anyone has any better data on the representation of women in phonology, especially with respect to semantics, syntax and phonetics.

I also have the impression that women are under-represented in phonological discussion, that is, in question periods and other discussions at conferences, and I suspect this is part of a much broader phenomenon. A piece of data on this also comes from AMP 2015. Kie Zuraw kept track of the gender of question askers for 16 of the talks (all but the first two). 74/103 = 77% of the questions were asked by men, even though the audience was about equally balanced between men and women. Zuraw’s observations replicate previous observations by Stephanie Shih from the Computational Phonology and Morphology Workshop held July 11 2015 at the LSA Summer Institute, in which the audience was roughly gender balanced, but the question takers skewed male. Inspired by Shih and Zuraw’s observations, I kept track of the gender of question takers at the LSA Phonology: Learning and Learnability session January 7th, 2016, and got 26/29 = 90% male questioners, with what looked again to be a roughly gender balanced audience.

These results are not surprising – I think they are just confirming what we’ve all informally observed in conferences and elsewhere (though I have to say that I was surprised at how skewed my own count was). There is undoubtedly a complex set of conscious and unconscious biases underlying our behavior that’s producing this distribution, and presumably there is a literature in some field that has studied related phenomena. My current thinking is that there are some pretty obvious conscious decisions we can each make to change this distribution, and that simply talking about this phenomenon and raising awareness of it may well help to get a better representation of women in phonological and other academic discussion. I do hope this situation changes, because I’d very much to like to hear more of my female colleagues’ thoughts after talks.

Update Jan. 10th: Thanks to someone who prefers to remain anonymous for the following graph, which shows we still have some work to do in terms of representation of women as invited speakers. The ns in the graph are the total number of speakers. 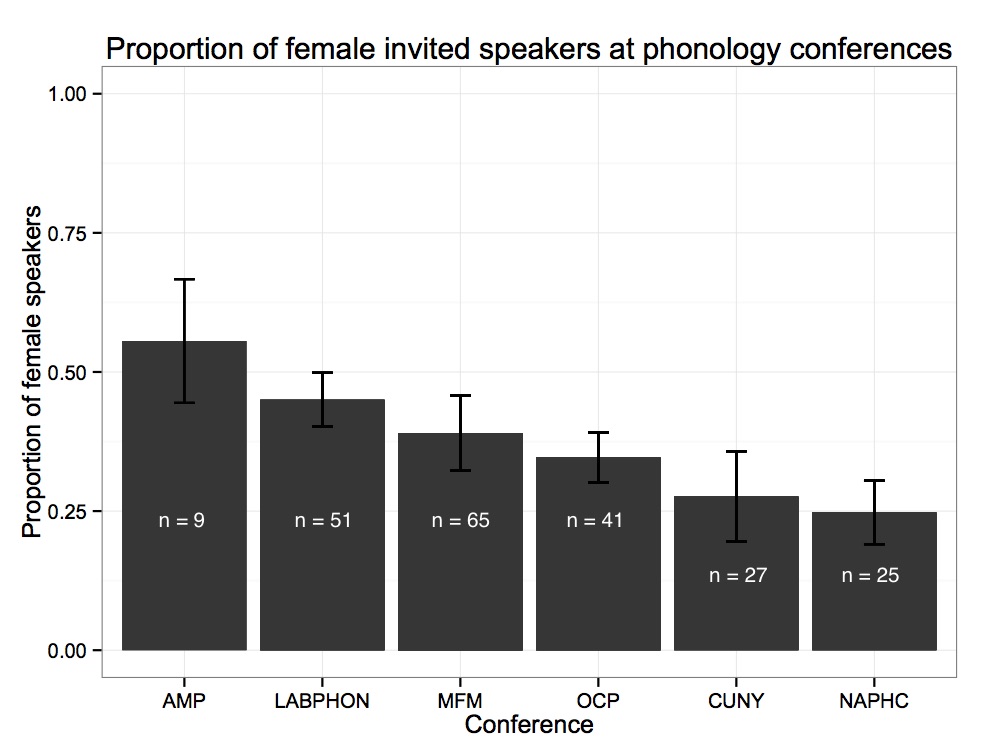 Update Jan. 12th Sharon Peperkamp has shared “data for 53 conferences between 1993 and 2013, for a total of almost 300 invited and more than 2000 selected speakers, with 37% invited vs. 49% selected women”. It’s great to see that women are indeed well represented in phonology in general, and this makes it even clearer that we have work to do on the invited speaker numbers. Sharon has also contributed this plot of percentages over time. 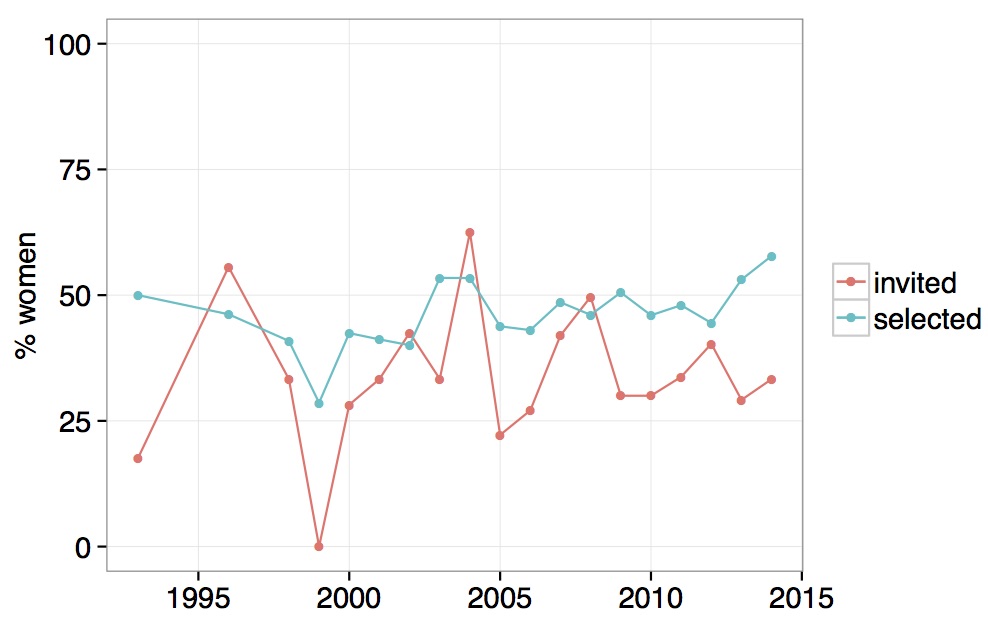 The spreadsheet is available here, if anyone would like to further analyze it, make figures, or continue to keep track of the numbers. If someone wants to volunteer to coordinate this effort, please e-mail me, and I’ll put that information here. As Rachel Walker has pointed out to me, conferences could also keep track of diversity statistics themselves – apparently she’ll be bringing this up with the AMP board. If this happens, we could keep a consolidated public record here.

37 thoughts on “The representation of women in phonological discussion”