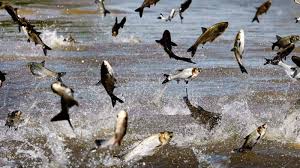 For hundreds of years, the fishing industry has not only supported millions of Americans livelihood, but has also become an immense avenue of trade and commerce across domestic and foreign borders. Invasive species threaten this avenue and are estimated to cause the United States tens of billions in environmental and economic damage each year they remain in U.S. waters (Pasko & Goldberg, 2014). An invasive species is defined as a non-native species in an ecosystem whose introduction will likely cause environmental harm (National Invasive Species Information Center, 2006). Aquaculturists introduced the invasive Asian carp to the United States in 1970 for the sole purpose of controlling algae blooms in aquaculture ponds. Algae blooms are an increase in algae and green plants, that may carry toxins, due to an excess amount of nutrients in the water that deplete the amount of oxygen resulting in the death of fish (Environmental Protection Agency [EPA], 2017). Since Asian carp feed on algae, aquaculturists believed they were the perfect solution to controlling their algae bloom issue. This worked until 1980, when flooding led to Asian carp (i.e. bighead carp, silver carp, grass carp, and black carp) escaping their aquaculture ponds and spreading into local water bodies, introducing them into the Mississippi River, Ohio River, and some of it tributaries. Once the Asian carp population settled into the surrounding bodies of water, they started to outcompete native fish by appropriating their resources. To resolve the detrimental Asian carp issue, it is essential for humans to fulfill the role of their natural predators by creating a profitable fishing market to reduce their population in U.S. ecosystems.

Asian Carp are an extremely dangerous fish for the ecosystem. The presence of Asian Carp in the Ohio River led to a population crash of Gizzard Shad, a dominant planktivore species (aquatic organisms that feed on plankton such as zooplankton) in the early 1990s (Pyron et al., 2017). Gizzard shad are small fish in the herring family that feed on these planktivore species. The Asian carp consume up to 40% of their body weight in planktivores each day, leading to a decreased amount of  food supply for Gizzard shad, which led to a decrease in their populations (Pyron et al., 2017). A clear over population of carp is present and something must be done. In 1997, fishermen reported catching over 50,000kg of carp compared to the previous catch size of 5,000kg (Chick and Pegg, 2001). Although Asian Carp are only one of 139 species in Lake Erie, they are quickly taking over space and resources, resulting in the native species becoming extinct in those specific areas (Simon et al., 2016). If time continues without a decline in population of Asian carp, it is clear that the native species will continue to decrease. If native fish continue to decrease in the Mississippi River, it will hurt the fisheries and the ecosystem because carp are effectively killing off native species due to competition for resources. The amount of taxpayers money it would take to rebuild the ecosystem is unthinkable. The jobs and money lost will be in the millions. At the end of the day, Asian carp are taking over many of the major U.S. rivers, which can be more devastating than one can imagine.

In the river economies, commercial fisheries are essential to efforts of reducing the population of Asian carp. U.S. fisheries provide $208 billion in sales, contribute $97 billion to the nations GDP (Gross Domestic Product) and provide 1.6 million people with jobs (NOAA, 2017). To operate a healthy fishery, there must be a balance between predator and prey (Minnesota Sea Grant, 2017).  In  the U. S., Asian carp have very few natural predators, allowing them to out-compete native fish species, resulting in a reduction of those native fish populations (Minnesota Sea Grant, 2017). The decline of native fish populations negatively affects fisheries because it becomes harder and more expensive to raise and sell those fish, resulting in the closing of fisheries (Louisiana Wildlife & Fisheries, 2015). To prevent commercial fisheries from shutting down, the demand of Asian carp needs to increase. Only when demand is increased, will the process of lowering carp populations rise.

The best way to control an invasive species is to create a mechanism to prevent further introduction, create systems to monitor and detect new infestations, and to move rapidly to eradicate invaders (National Wildlife Federation, 2017). Once an invasive species establishes itself, it becomes extremely difficult and expensive to control. Lionfish are native to the Indo-Pacific, and are found invading the east coast of the US, the Caribbean, and the Gulf of Mexico (NOAA, 2017). Like Asian carp, Lionfish have very few predators due to the fact that they are non-native to the U.S. However, the U.S. combated the invasive lionfish by distributing permits for their removal to recreational divers (Florida Fish and Wildlife Conservation Commission, 2017). Permits to catch lionfish allow one to use spear fishing methods; no permit is required for the removal of lionfish with the use of hook and line (Florida Fish and Wildlife Conservation Commission, 2017). After the Lionfish are caught, they are used as a food source for people (Lionfish Hunting, 2017). Eating lionfish is good for the environment because removing them helps reefs and native fish populations recover from environmental pressures, lionfish predation, and overfishing (Lionfish Hunting, 2017). Lionfish and Asian carp are both invasive species in the U.S., and they both became successful by their ability to reproduce rapidly, outcompete native species for food and habitat, and avoid predation (NOAA, 2017). Therefore, we can confidently say that using a solution similar to what was used with Lionfish, will give us the results we are looking for with Asian carp. Asian carp have negative effects on the ecosystems they invade, but by using Lionfish as a base model, we will be able to combat the overpopulation of Asian carp by increased fishing.

Many communities rely on fishing as a source of income and food. Asian carp lack natural predators as a consequence of their rapid reproduction, which results in an absence of natural predation to bring down their population. Fortunately, Asian carp mature rapidly and reach a harvestable size at a young age (Michigan Department of Natural Resources [MDNR], 2017). Commercial fishers and markets can benefit from this rapid population increase of Asian carp because it provides an opportunity to create a market. Since commercial fishers rely on large numbers of fish, the higher the population of Asian carp, the more they are able to catch and sell them. In the U.S., humans are the main predators of Asian carp, resulting in the removal of more than 750,000 kg of bighead carp from the Illinois River over a four year period (Ridgway & Bettoli, 2017, p. 438). Asian carp can create plentiful commercial fishing jobs and increase demand with the establishment of a proper marketing strategy.

To eliminate the over population of Asian carp, we need to create a market that increases the demand of Asian carp. Once the demand of Asian carp increases, hunting pressure will also increase. Private industries are actively developing products and markets that utilize Asian carp in a high volume to keep up with increased fishing (Pasko & Goldberg, 2014). One of the main ways Asian Carp are used after they are caught is in food dishes (Illinois Department of Natural Resources [IDNR], 2017). In addition, Carp are commonly turned into kosher hot dogs, fish jerky and omega-3 oil supplements (Modern Farmer, 2015). The community of Chicago was given an opportunity to sample the healthy and tasty fish free of charge, while teaching them about efforts to protect the Great Lakes from the invasive Asian carp (IDNR, 2017). We aim to eliminate the negative perception of Asian carp through public exposure and outreach to promote it as a quality food item in domestic and international markets.

Asian carp have the potential to invade the Great Lakes if no action is taken towards decreasing their population. Bighead and Silver carp eat 5-40 percent of their body weight each day (Asian Carp Response in the Midwest, 2017). They are filter-feeders, meaning they consume plankton, algae, and other microscopic organisms. Native fish populations rely on the same plankton as their main source of food during their larval stage. If Bighead and Silver carp populations increase they can wipe out the larval population of native fish by striping away their key sources of nourishment at the vulnerable larval stage (New York Invasive Species Information [NYISI], 2011). If Asian carp spread to the Great Lakes, they will negatively affect the $7 billion/year fishing industry by out-competing native fish species for food and habitat.

If Grass carp were to spread into the Great Lakes, they will cause degradation of the water quality and damage to wetland vegetation by consuming aquatic plants (NYISI, 2011). Their foraging disturbs lakes and river bottoms, destroys wetlands, and increases murkiness in the water, making it more difficult for native fish to find food. The destruction and loss of aquatic vegetation also leaves native juvenile fish without proper cover from predators and reduces spawning habitats (Fisheries and Oceans Canada [FOC], 2017).

The local and commercial fishing industries are an extremely important part of the United States environmental and economic well-being. Invasive Asian Carp are a key factor to a massive native fish decline in the Mississippi River (Asian Carp Response in the Midwest, 2017). Without fish, people would lose not only a food source, but a source of income and a way to keep rivers and lakes clean. Asian carp are a type of fish that are very good at hunting prey and can reproduce quickly, making it essential to create a population decline in order to protect the natural ecosystem. Creating a consumer market for carp will not only solve the problem of overpopulation, it will also be beneficial for our economy and our environment. As of recently, various fisheries all over the country have suffered due to these carp spreading into more and more waterways (NOAA, 2017). Since fisheries are a billion dollar industry, Asian carp are essentially creating an economic problem (NOAA, 2017). To reduce the current population, fishermen first need to fish out a majority of the carp, which they will then sell to local businesses and vendors. Once the fish is purchased by these businesses and vendors, they can sell the fish in the public market, making two branches of this economic sector profit, therefore boosting the economy. In turn, the Carp population due to increased demand will eventually become extremely low, allowing the native fish populations to become established once again. The native fish could then start to rebalance the natural food web again, keeping the rivers healthy.  If Asian carp are only minimally hunted, there is serious risk of the health of all native species in the Mississippi river as well as the river itself. Asian Carp are clearly a very successful yet detrimental, invasive species to the United States. However, their success may lead to their demise. If we can create a high demand market for carp, utilizing humans as their natural predator, we can restore the river environments that have been harmed, while creating jobs and food for people.

National Oceanic and Atmospheric Administration. (2017). What is a Red Tide.

Ruffe: A New Threat to Our Fisheries. (n.d.). Retrieved December 04, 2017, from http://www.seagrant.umn.edu/ais/ruffe_threat

What We Do to Stop Invasive Species. Retrieved December 04, 2017, from https://kids.nwf.org/Home/What-We-Do/Protect-Wildlife/Invasive-Species.aspx