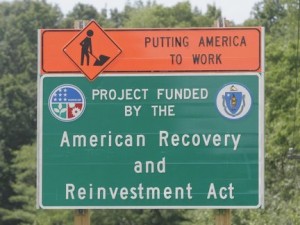 James Heintz ’01G, assistant research professor at the Political Economy Research Institute (PERI) and Robert Pollin, UMass Amherst economics professor and co-director of PERI, commented in a story about the progress of the economic stimulus package.  Although you can track the spending through government websites, interpreting the data is “not the easiest thing,” admits Pollin.  Heintz points out that one problem stems from the fact that there are many branches of the state and federal governments administering the funds. (Masslive.com, 3/14/2010)

In a recent NY Times Economix blog entry, Nancy Folbre, UMass Amherst economics professor, discusses some of the different measures that are used to compare the status of women amongst the world’s countries.  Rankings vary depending on which index you look at,  however none of them rank the United States in the top 10.  “Despite these differences, a clear pattern emerges. Scandinavian countries that have made gender equality an explicit goal and implemented policies such as universal child care and paid family leaves almost always land on the top of the list.  The United States lags far behind.”  (Economix, 3/8/2010)

James K. Boyce, UMass Amherst economics professor, is quoted in an article that analyzes the climate bill being drafted by U.S. Sens. John Kerry (D-Mass.) and Lindsey Graham (R-S.C.).  According to Boyce, this bill, which would apply different types of carbon limits to different sectors of the industry, is not as efficient.  “You want to treat all carbon molecules the same, not distinguish between, say, carbon coming from a coal plant and carbon coming from gasoline,” says Boyce. “If you favor one, you’re doing that to please your lobbyists, but there’s an efficiency cost in doing so. And that efficiency cost gets passed along to the American public.” (Solve Climate, 3/15/2010)

A letter to the editor cites a recent NY Times Economix blog entry by Nancy Folbre, UMass Amherst economics professor, about underwater mortgages, in which she wrote about the unlikely possibility of a widespread homeowner revolt against lenders and banks. (Mercury News [San Jose, Calif.], 3/10/10)

A column by Heidi Garrett-Peltier ’06G, research fellow at the Political Economy Research Institute (PERI), looks at the idea that increased defense spending to send an additional 30,000 U.S. troops to Afghanistan may help the damaged economy the same way any government spending is used when the economy falters. She says this “military Keynesianism” may work to some degree, but is an inefficient way to spend public money. Instead, she argues, spending on non-military projects creates more jobs and more positive economic impact. (Dollars & Sense, 3/8/10)