As of today, I am two thirds of the way through the Oracle Corporation interview process for a position as a sales associate. While my potential career as a sales associate at one of the largest tech companies in the world might be a topical subject to write about for this project, I’m not even sure I want to be a salesman forever. Although the near future is starting to take shape for me, the rest of my future remains open. While I’m still uncertain about my career, I know exactly where I’d like to go to escape from whatever it is: mountains. Rocky trailed terrain dotted with trees and ferns provides the perfect space for recreational exercise, conveys a sense of both sheer beauty and humility, exercises important skills learned within my major, and provides at least one aspect of my future that remains certain.

A jagged, fifty five-degree incline with nothing to hold on to but loose rocks and roots jettisoning out of cracks in the cliff face is staring deep into my eyes. Small insects crawl with ease up and around the exposed bark etched within the rocks. It’s tempting me to scale it but also daring; the rocky facade is a challenge demanding my focus and full appreciation. A single wrong step could spell a snapped ankle and a long way back down the trail in agony with feelings of failure draped over my shoulders. The right steps will lead to triumph and satisfaction.

Although I am in no way an extremely experienced climber, I have come across several scenarios just like this on my hikes. It’s taxing. It’s tiresome. It’s hard work and there’s always a lot of sweat involved. As a scrawny-armed kid who hated putting on a weakling dumbbell show in the back of a Planet Fitness, I was often tasked with finding alternative ways to workout. Basketball was always an easy outlet, but it often required being indoors and out of the sun. Being on a challenging mountain trail enables me to stay outdoors and strengthen my body, my knees (they’re the knees of an elderly person), and my mind. It may sound like cliche, ‘namaste’ knock off phrasing, but hiking has always managed to make me sweat and clear my head. It’s also impossible not to get lost in the wonder of the beauty mountains provide.

Ever since I was a young child, I have had a strong fascination with nature. Springs and summers were spent catching bugs in jars and mosquito bites on elbows and not a spring or summer passed without the pair. Fast forward fifteen years, and I remain as infatuated with my environment as I was as a boy. Mountains have a way of displaying their beauty to you in silent, yet attention-demanding ways that only elements of the natural world can.

Breathing heavy after climbing in the hot, late afternoon sun and finally summiting, I look out over the endless space beneath my feet. Newly budded trees sway in the wind sans outstretched leaves beckoning for rays. It’s too early in the season for them. The silence is quiet enough to be noticed, as if there actually was a sound echoing across the landscape. The serenity, though, is interrupted by an audible ‘woosh’ from below. As a wide shadow encompasses the top of a pine, I look down to find it being cast by a bare-headed turkey vulture ominously gliding over the tree line below. To my right, I can see a little chipmunk nibbling on an acorn in the thick, composting brush.

VIew of Norwottuck from the East side of Bare.

The mountain speaks through seasons as well; winter is silent while creatures sleep and bunker down for the time’s harshness. It is better to be fat, warm, and asleep than skinny, cold, and outside. The spring is quite noisy, bustling even, with waking and newly emerged life. The transition is impossible to miss. As the year goes on, spring turns to summer and there appears to be a steadiness to the environment; the leaves are fully bloomed and animal life is in full swing. Lastly, fall is a time for preparation for all creatures. The trees lose their leaves, the birds fly south, and the animals collect and store food. Those who don’t spend a lot of time on the trail may not pick up on things so minor, but my experience as an English major has encouraged observational skills.

I’m traveling down the side of the mountain after an exhausting afternoon of digging my boots into the soil to pry myself up. Downhill is easier but it is not easy. I have stop to rest and have a drink of water when my hand grazes across a most peculiar bark pattern smooth as the surface of a rock worn by the sea. I almost don’t notice it, but I do. I let my fingertips remain there, as if somehow transcending the tree’s natural life force with my own. A feeling of appreciation and oneness washes over me, if only for a moment. I am nature and nature is me.

For centuries, fiction writers and artists have gone though periods where they’ve been infatuated with the world around them, particularly during the rise of romanticism (Caspar David Friedrich’s Wanderer Above The Sea Of Fog). These writers and artists all displayed works that demanded readers notice and appreciate details both large and small. Reading closely, a skill mainly attributed to being able to break down small passages and understand their meanings on the most minute of levels, has transitioned rather surprisingly into a keen eye. Interestingly enough, some of the most inspiring and thought provoking parts of nature can also be the smallest and most difficult to notice. The same can be said about literature.

My boss just told me that I suck at my job. I know I don’t suck, but I sure feel like I do now. What is wrong with me? I really am struggling to find answers lately. This feels like a dead end. I don’t know what I want to do or how to make myself happy.

English as a major has also encouraged me to work through details logically and critically to arrive at answers. Critically thinking about literary works, their meanings, and their purposes has provided me with a skill that transitions into my own life on both a professional and personal level. Sometimes all it takes to work through any bumps in the road is to step outside of the world I live in and into the woods.

Because of its therapeutic qualities and my unabated love for the natural world, hiking has become an irreplaceable part of who I am and what I care about. However, I haven’t climbed enough summits and I’m itching to see more. I live near two mountains, Norwottuck and Bare, that are very easy to get to, and I find myself returning to them frequently out of plain convenience. Unfortunately, the proximity of these peaks will be short lived because I will be moving away from Amherst in the next few weeks following graduation. While my easy access to mountains may disappear, I am still planning several big hikes for the coming summer months that could prove to be my most challenging.

I’ve never even heard of Lanesborough, Massachusetts, but now I’m floating over it like some sort of Greek myth ruling over his people. For a second, I think to myself, ‘That’s pretty pretentious.” But it isn’t. I just climbed 3,491 feet in terrain I’ve never experienced before and I did it before the sun went down. I can compare myself to a myth if I want to. My hiking partner can consider herself a mythological goddess as well. 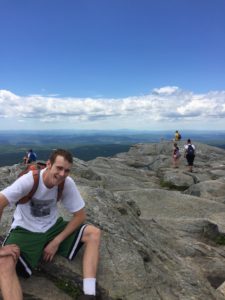 Mount Greylock is the tallest point in Massachusetts, maxing out at 3,491 feet. It is an enormous climb in comparison to some of the hikes I’ve taken in the past and will serve to be quite the challenge. Other peaks I’d like to conquer are Foot Spruce Hill at 2,566 feet and Wachusett Mountain at 2,006 feet. If my skills improve and my drive remains, I’d like to transition to longer hikes that involve camping. The Appalachian Trail takes months to hike in its entirety, but I’d at least like to hike sections of it for certain periods of time.

Managing one’s sanity is important to maintain to a stable existence as well as an enjoyable one. While other methods can serve to keep me grounded, nothing has become as important as vertical walks in the woods. The mountain has become a theatre for me to work through my problems, a gym to exercise in, and a future ready to be conquered. Its beauty, no matter which mountain, is unquestionable, my infatuation with it undeniable. I know that mountains will be a piece of my existence for as long as I live.