It is not entirely easy to write this, to pretend to business as usual, when my country is gripped by a species of mass hysteria. I have read a little about the madness of crowds, the phenomenon where people in a mob are collectively subjected to delusions. It is another thing altogether to be living in the middle of them. Delirium is a fair word for a presidential election being run like an episode on American Idol. Yet there is no shortage of blogs about these things, many children shouting about the naked emperor and just as many adults mansplaining the clothes back on, but there are few blogs describing the working days of a person doing experiments on plant growth. So, business as usual.

Here is a picture: 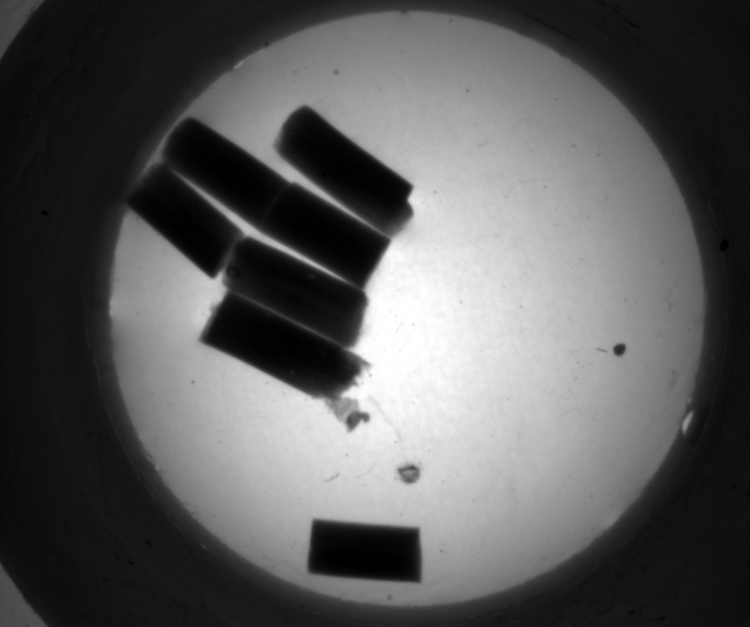 Photograph of segments of the stem of maize seedling. The diameter of the big circle is about 2 cm.

These loggy things are pieces of a maize seedling stem. I cut them with razor blades and rather than ‘pieces’, I call them ‘segments’. They are floating here in one mL of solution in a ‘dish’ formed by gluing a Teflon washer on a glass slide. This image was taken looking through the washer. The diameter of the washer is about 2 cm. I took this picture almost two years ago when I was working in Nottingham and during the first LabFab season, I wrote about them fairly often (sumarized here).

Segments are altogether absent from LabFab season two because the segment project was a dead end, or to borrow a favorite phrase of my friend Richard Williamson, a plummeting failure. But over the past few weeks, I had an idea for rescue, one that while perhaps not making it front page news, might at least get the story on page 32 below the fold, I mean published.

I had better explain. To start with, what I tried to do in England was to develop a system to measure the growth of isolated stem segments, like the ones pictured. Stem segments had been studied classically (I don’t mean in Mozart’s day, rather in the 1960’s though 80’s) and gave rise to important findings. They still seem like good system for answering festering questions about growth. OK, the ‘festering’ is an exaggeration. I was, and still am, interested in how the growth hormone auxin causes stems to grow faster in length, and what it does, if anything, to their growth in width. In the heyday of experiments on segments, growth was measured by gluing wires onto the segment ends so that their position could be measured. Accurate, but messy and invasive, and missing width entirely. Today, with imaging, segment growth can be measured without resort to wires or any other manipulation other than cutting the segment and putting in a dish.

Indeed, I devised a nice system for doing just that. The washer-dish to hold segments and a camera to take their pictures at desired intervals. But nothing is ever simple—I decided to do those experiments in total darkness. Stems grow fast in the dark. And while stems also grow fast in really dim light, it is difficult to measure the intensity of dim light, and to standardize things so that each seedling gets a similar amount. I used total darkness because it is reproducible. And to be honest, because experiments in the dark were exciting to do. I cheated a little– I used infrared light, to which plants are insensible, and a night vision scope, which gave me limited vision in one eye. Dr Cyclops (scroll down). It was still a challenge.

The experiments failed because of variability: there was a ten-fold range in growth rate in response to auxin. Even for biology, that is unacceptable. I tried this and I tried that, to unearth the source of the variation, to no avail. Thus, no system to be getting on with back home at UMass. A dead end.

Near the end of my year in Nottingham, I was complaining about this pestering variability to a greybeard of my acquaintance. He told me that totally dark-grown plants are probably in a meta-stable state, thanks to being stuffed full of a photoreceptor called phytochrome. He said further that the problem might be resolved by growing plants in dim red light, because this would remove most of the phytochrome but stems would still grow well. That comment came too late for me to do anything with in the UK and I filed it under Whatever.

Fast forward to the other day, when—boom—it hit me that I could do a couple of experiments with dim-red-light grown plants. I could test my colleague’s suggestion. If the segment growth remained variable, I would lose whatever time was spent but if the growth straightened out, then hey presto! I would have a paper as well as a system. Those seemed like good odds because the greybeard in question knows their oats. Even better, I already had set up a small bank of red LEDs in Peter Hepler’s dark room. These were meant for a different experiment, using maize roots, where red light grown material would be useful. But there they were. I also had the washer-dishes and the camera, and even the little platform to hold the washer-dishes over the camera.

Last week, I revived and aligned the bits. I woke the old Dell laptop from its long sleep (needed to be coaxed a little). I unpacked and washed the washer dishes and got the camera aligned and focused. I still need some hardware to prevent things from moving around but with luck that will be sorted Monday. I started some maize seed on Thursday so I can see how many days it will take under dim red light and ambient temperature to get to harvestable seedlings. Then after final alignments, and putting fresh blades into the cutting jig, I can run some experiments. Bets anyone about losing the variability???