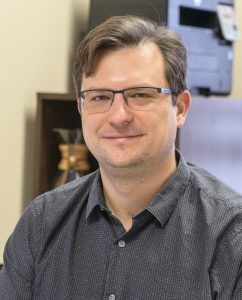 BIO: Zlatan Aksamija received his B.S. in Computer Engineering (Summa Cum Laude, James Honors Scholar, Mathematics Minor) in 2003, and his M.S. and Ph.D. in Electrical Engineering (with Computational Science and Engineering option) in 2005 and 2009, respectively, all from the University of Illinois at Urbana/Champaign. His dissertation work entitled “Thermal effects in semiconductor materials and devices” was supported by a DOE Computational Science Graduate Fellowship (2005-2009). Zlatan was awarded an Outstanding Paper award at the EIT’07 conference and a Greg Stillman Memorial semiconductor graduate research award in 2008. From 2009 to 2013, Zlatan was a Computing Innovation Postdoctoral Fellow and an NSF CI TraCS Fellow in the ECE department at the University of Wisconsin-Madison. His research focused on semiconductor nanostructures for thermoelectric energy conversion applications, as well as numerical methods for the simulation of electronic and thermal transport in nanostructures. In 2013, Zlatan became an Assistant Professor in the Electrical and Computer Engineering Department at the University of Massachusetts-Amherst and founded the NanoEnergy & Thermophysics lab, where he studies nanoscale dissipation and heat transfer in 2-dimensional materials, alloys, and nanocomposites. He received the Best Paper award from IEEE Nano (2014) and a Lilly Teaching Fellowship from the UMass Institute for Teaching and Faculty Development.