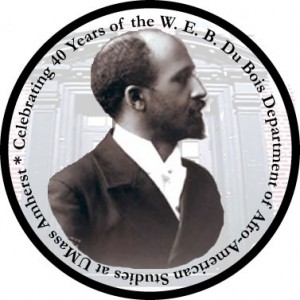 Welcome to the blog of the W.E.B. Du Bois Department of Afro-American Studies.

The W.E.B. Du Bois Department of Afro-American Studies at the University of Massachusetts Amherst. The Department is an intellectual, professional, and social community which stands at the forefront of national, global education and research on people of African descent in the United States and the African world. Please browse our main web site to learn more about our academic programs.  In this blog we will explore the past, present, and future of the intellectual work of the department. Herein we will also share news of upcoming events as well as create an archive and a forum for discussion of those events.

Black Studies in the Americas beyond the U.S.
A Roundtable on Epistemological and Political Challenges

Izielen Agbon is an energy economist and petroleum engineer who has spent the past decade in Venezuela. Originally from Nigeria, he came to study in the U.S. during the 1970s, and first encountered the Black Studies movement. He completed his dissertation “Class and Economic Development in Nigeria, 1900-1980: Plans, Struggle, Workers, Peasants” at The University of Texas at Austin in 1985. In addition to his continued efforts to create an analytical framework within which the relationships among the State, social classes and Foreign Capital in Nigeria can be examined, he joins the other panelists in theorizing and analyzing the “worlding” of Black Studies.

Amilcar Shabazz conducts historical research with an emphasis on the political economy, social and cultural movements, education, and heritage preservation and representations of African people. His book Advancing Democracy: African Americans and the Struggle for Access and Equity in Higher Education in Texas (University of North Carolina Press, 2004), received numerous honors including the T.R. Fehrenbach Book Award and being ranked a top ten nonfiction book by Essence Magazine. His newest book, co-edited with Celia R. Daileader and Rhoda E. Johnson, is Women & Others: Perspective on Race, Gender, and Empire (Palgrave Macmillan Press, 2007). Shabazz has also published The Forty Acres Documents, a sourcebook on reparations, along with journal articles, book chapters, reviews and writings in publications as diverse as The Source Magazine of Hip-Hop Music, Culture & Politics. An international scholar, he is a Fulbright Senior Specialist and has done work in Brazil, Ghana, Japan, Cuba, Mali, France, Nicaragua, and Jamaica. Presently, he is completing an historical biography entitled “Master of the Blast: Carter Wesley the Revolutionary Pragmatist.”

The need to rethink and redefine the field : geneaology – three moments in a long history