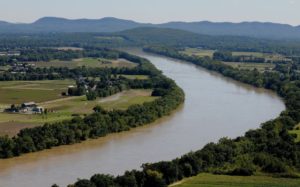 The view of the Connecticut River from the Summit of Mt. Sugarloaf in Deerfield, MA. (Photo Credit: Dave Roback for The Republican)

Rivers and streams in New England will inevitably flood, and there are some low-cost steps that federal and state governments can take to help communities be better prepared. That’s the message from a recent UMass Amherst report.

Geography Professor Eve Vogel led the study, and will present the findings Friday in Shelburne Falls, Massachusetts. Five years ago, Shelburne Falls was one of the towns hardest hit by Tropical Storm Irene. Vogel said the nature of New England rivers poses some challenges for local planning officials, and too often, washed out infrastructure is rebuilt in exactly the same place after it’s destroyed by floods.