The human knee joint incorporates numerous soft tissue structures including the cruciate ligaments, collateral ligaments, and menisci that are crucial to stability and proper function. Each knee joint contains two semi-circular fibrocartilagenous menisci (medial and lateral) located between the femur and the tibia which aid in stability and force distribution during mechanical loading. Each meniscus attaches to the tibial plateau via two ligamentous insertions (anterior and posterior) into the underlying bone. The transition of the compliant meniscus to the hard underlying bone occurs over a relatively short distance of insertional tissue, and this interface is an important region of focus due to its complex mechanical properties. The insertion of meniscus into bone includes a transitional area that is made up of four distinct regions: ligament, uncalcified fibrocartilage, calcified fibrocartilage, and bone. These regions vary significantly in their structural composition and aid in the distribution of loads throughout the knee joint. Meniscal entheses are responsible for diffusing longitudinal loads that are transmitted via hoop stresses of collagen fibrils in the mainbody of the meniscus. When entheses become structurally compromised the meniscus can translate excessively outside of the joint space. This phenomenon, called meniscal extrusion, is a known precursor to developing osteoarthritis. Previous work in the lab has focused on elucidating how the structure of meniscal entheses affect mechanics and how the structure-function relationships are changed in the aged arthritic knee. 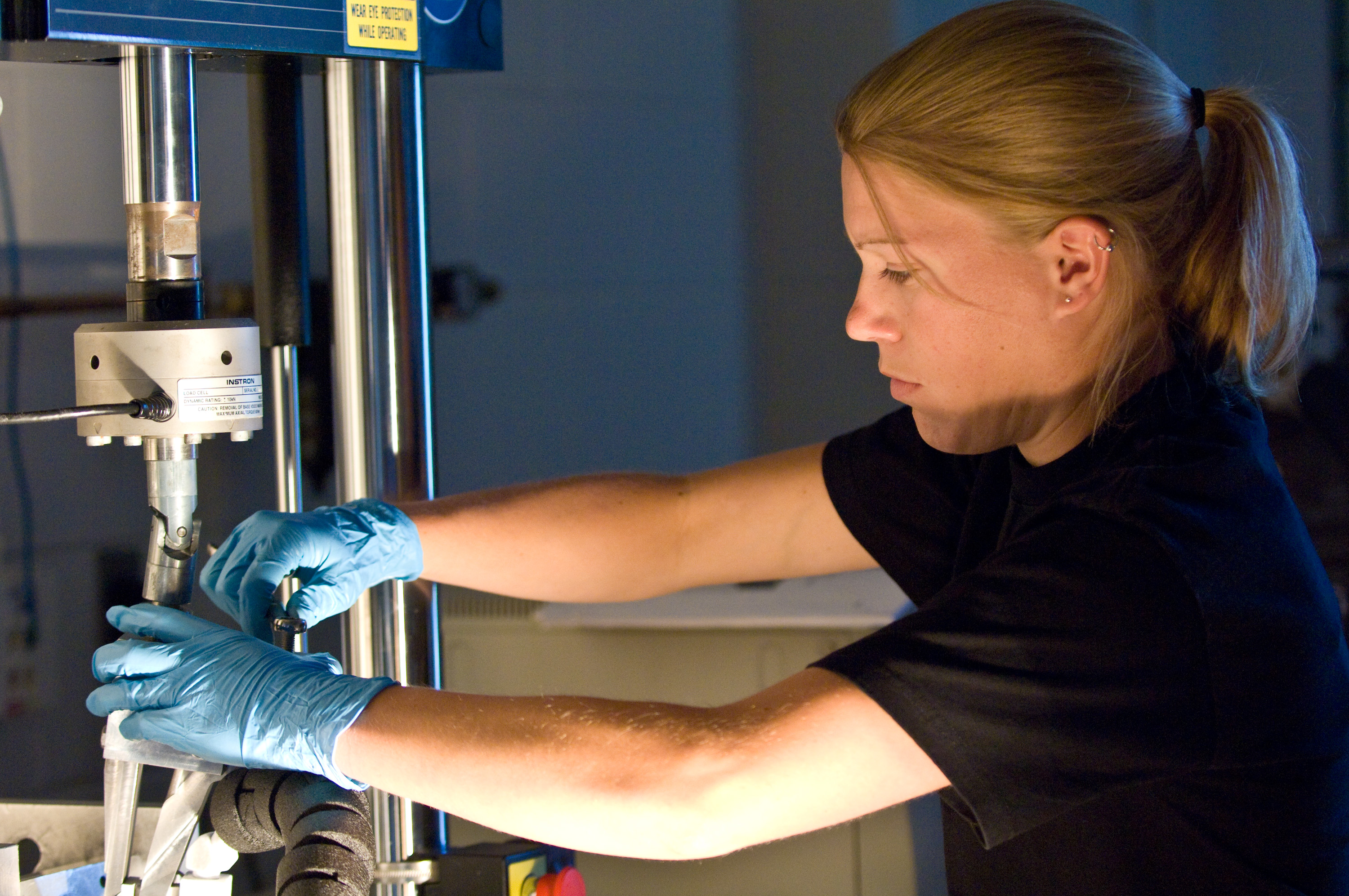 This figure shows a material testing system being set-up to measure the material properties of meniscal insertions. 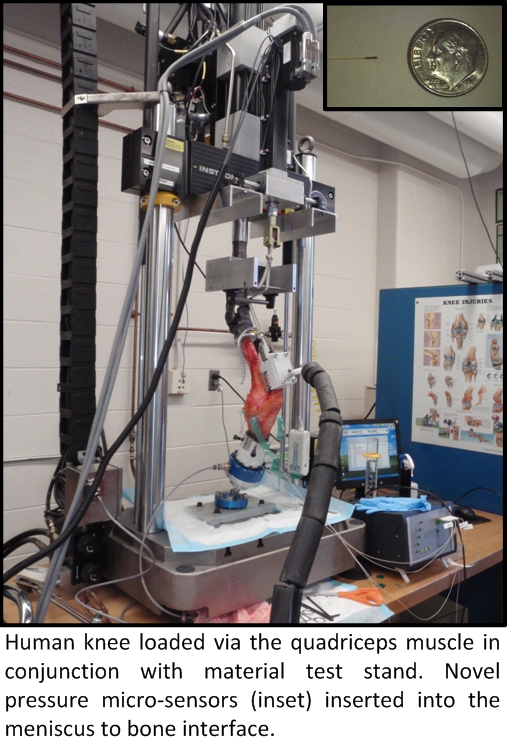 Initial research investigated the transverse mechanical properties of human meniscal entheses and the internal pressures present at each enthesis during physiological and pathological loading. More recently we have examined the structure of each enthesis tissue zone using histology techniques to determine the orientation of collagen fibers and the extent of interdigitation at the connection of fibrocartilage to bone. Additionally nanoindentation techniques were used to determine the instantaneous and steady-state behavior of each tissue zone. Ongoing research is investigating how structure and function of meniscal entheses change in subjects who suffer from osteoarthritis. Specifically the work is focusing on changes in collagen fiber orientation, tidemark organization, and the thickness of the mineralized zones. Results from this work will provide guidelines for developing a tissue engineered meniscal enthesis that can be successfully utilized to treat patients suffering from meniscal injuries. 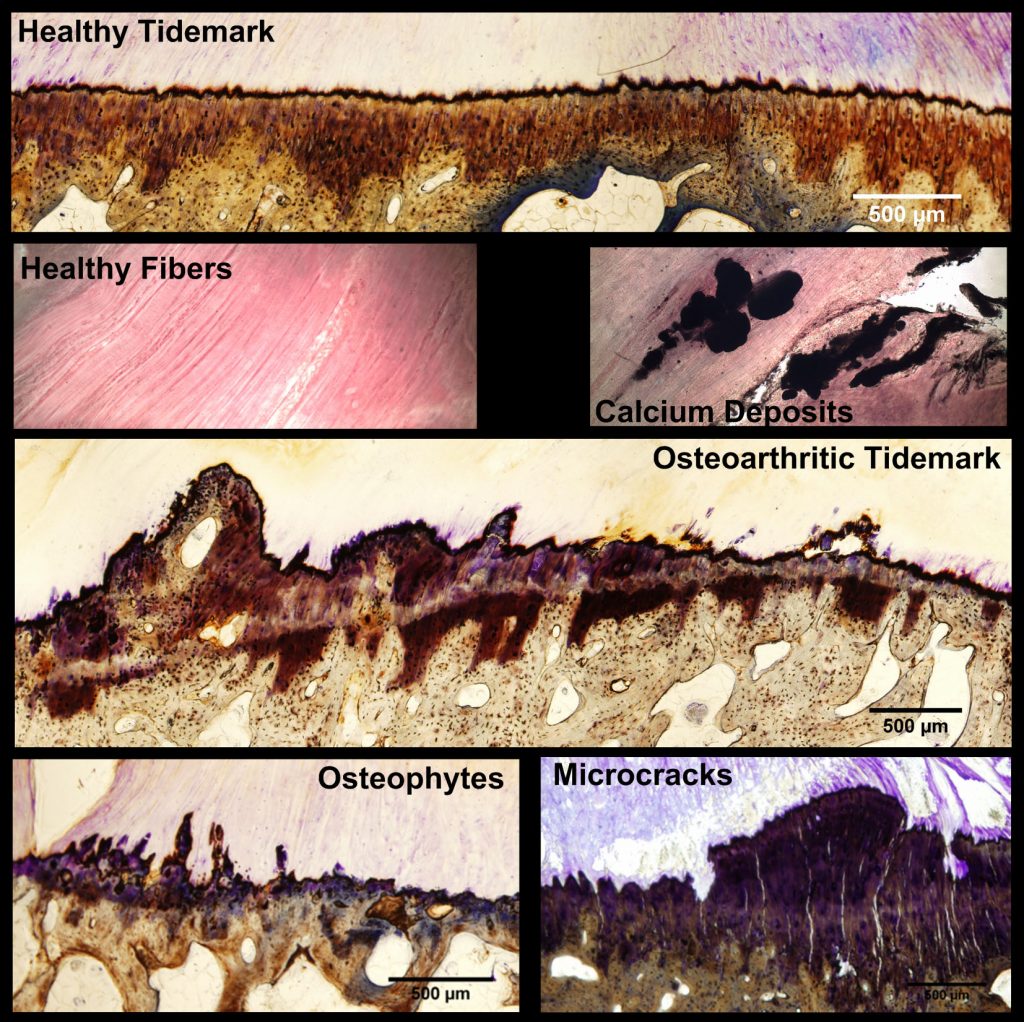 Recently we have discovered that this insertion into the underlying bone is both mechanically and biochemically comprised in osteoarthritic patients. Further research will investigate whether this end-stage degradation preceeds the development of OA or is a consequence.

A multiscale approach is necessary to understand how meniscal enthesis act to support the large compressive loads delivered through the body. Starting from the far right: crimping of collagen fibers, interdigitation into underlying bone, ligamentous like attachment, entire knee, and finally the entire leg that functions to deliver a outstanding athletic performance.