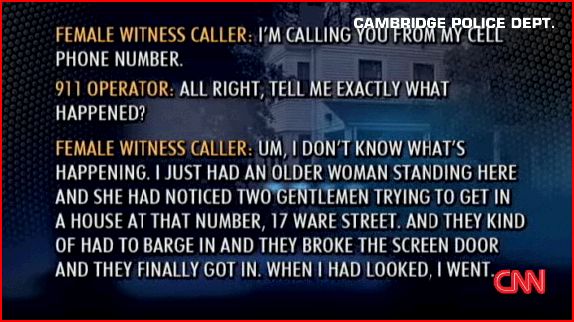 Lucia Whalen described “two gentlemen” and said there were suitcases and that the persons may actually “live there.” Sgt. Crowley’s report is full of errors. His arrest of Skip Gates was an abuse of his power and served only to try to humiliate Dr. Gates and to put his ego in check.  If the black cop on the scene really cared for his brother in blue he would have pulled Sgt. Crowley to the side and said to him let’s forget this a-hole and go on about our business.

The “teachable moment” here, if there is one, is that the police should NOT be allowed to abuse their power. They should be pushed to fight racism in their ranks, and they should give to people of color, black men in particular, the same regard they give to white men or, better yet, the respect they want for themselves. Here’s an analysis that seems on the mark to me, except that it’s a police problem, not just about Crowley:

The Henry Louis Gates situation is mainly a distraction, where the media has decided to document a sideshow instead of the hundreds of millions of people struggling every day with substandard health care coverage.But there’s also a serious policy component. Policemen should not be allowed to arrest people for being arrogant in their own home. If that was the case, right-wing bloggers would all be doing 10-20. It appears clear, and I guess there may be audio tape to this effect, that the cop came to Gates’ house, figured out that he was not a burglar, words were exchanged, and then the cop arrested him for disorderly conduct. That’s really over the line of what cops should be allowed to do, regardless of the motivations, racial or otherwise.
The crime of disorderly conduct, beloved by cops who get into arguments with citizens, requires that the public be involved. Here’s the relevant law from the Massachusetts Appeals Court, with citations and quotations omitted:The statute authorizing prosecutions for disorderly conduct, G.L. c. 272, § 53, has been saved from constitutional infirmity by incorporating the definition of “disorderly” contained in § 250.2(1)(a) and (c) of the Model Penal Code. The resulting definition of “disorderly” includes only those individuals who, “with purpose to cause public inconvenience, annoyance or alarm, or recklessly creating a risk thereof … (a) engage in fighting or threatening, or in violent or tumultuous behavior; or … (c) create a hazardous or physically offensive condition by any act which serves no legitimate purpose of the actor.’ “Public” is defined as affecting or likely to affect persons in a place to which the public or a substantial group has access.

The lesson most cops understand (apart from the importance of using the word “tumultuous,” which features prominently in Crowley’s report) is that a person cannot violate 272/53 by yelling in his own home.

Read Crowley’s report and stop on page two when he admits seeing Gates’s Harvard photo ID. I don’t care what Gates had said to him up until then, Crowley was obligated to leave. He had identified Gates. Any further investigation of Gates’ right to be present in the house could have been done elsewhere. His decision to call HUPD seems disproportionate, but we could give him points for thoroughness if he had made that call from his car while keeping an eye on the house. Had a citizen refused to leave Gates’ home after being told to, the cops could have made an arrest for trespass.

But for the sake of education, let’s watch while Crowley makes it worse. Read on. He’s staying put in Gates’ home, having been asked to leave, and Gates is demanding his identification. What does Crowley do? He suggests that if Gates wants his name and badge number, he’ll have to come outside to get it. What? Crowley may be forgiven for the initial approach and questioning, but surely he should understand that a citizen will be miffed at being questioned about his right to be in his own home. Perhaps Crowley could commit the following sentences to memory: “I’m sorry for disturbing you,” and “I’m glad you’re all right.”

Spoiling for a fight, Crowley refuses to repeat his name and badge number. Most of us would hand over a business card or write the information on a scrap of paper. No, Crowley is upset and he’s mad at Gates. He’s been accused of racism. Nobody likes that, but if a cop can’t take an insult without retaliating, he’s in the wrong job. When a person is given a gun and a badge, we better make sure he’s got a firm grasp on his temper. If Crowley had called Gates a name, I’d be disappointed in him, but Crowley did something much worse. He set Gates up for a criminal charge to punish Gates for his own embarrassment.

By telling Gates to come outside, Crowley establishes that he has lost all semblance of professionalism. It has now become personal and he wants to create a violation of 272/53. He gets Gates out onto the porch because a crowd has gathered providing onlookers who could experience alarm. Note his careful recitation (tumultuous behavior outside the residence in view of the public). And please do not overlook Crowley’s final act of provocation. He tells an angry citizen to calm down while producing handcuffs. The only plausible question for the chief to ask about that little detail is: “Are you stupid, or do you think I’m stupid?” Crowley produced those handcuffs to provoke Gates and then arrested him. The decision to arrest is telling. If Crowley believed the charge was valid, he could have issued a summons. An arrest under these circumstances shows his true intent: to humiliate Gates.

The cop baited the guy into leaving the house so he could arrest him for making a cop feel bad.

I appreciate the work of law enforcement. But regardless of race, too many cops have the belief that if they get insulted, they have the right to turn that into an arresting offense. That’s not the law whatsoever, nor should it be. It creates a chilling effect among the public not to call out bad behavior in law enforcement or raise your voice in any way. I know we’re all supposed to believe that cops are saintly, but I live in LA. Police misconduct happens all the time, and we should be vigilant when it does.

Instead, the media takes the soccer ball and chases it into the corner, without any semblance of factual records or perspective. It becomes an emotional argument instead of a factual record of misconduct. We pay cops with tax money. We should not risk arrest when arguing with them.

Dr. John Hope Franklin passed in the morning of March 25, 2009. The word seem to ring out instantly that he had made his transition. We have John W., Karen and the entire Franklin family in our prayers. 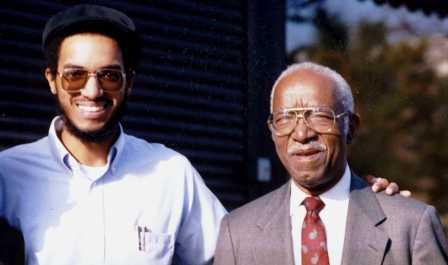 In this picture I am together with Brother John, the Dean of Historians of the African American experience, in New Orleans some 20 years ago. We were attending the Southern Historical Association’s annual meeting. I was in graduate school and just beginning to see myself as a member of the historical “profession.” It was great to meet the grand master of the game. A few years later when I was in my first full-time teaching appointment as Benjamin Banneker Honors Instructor of History at Prairie View A&M University I co-authored a grant with Dr. Jewel Prestage to bring him to Texas to speak to our students. The grant was funded and the next year we brought him to campus. He gave a brilliant speech, but in the Q&A afterwards one of the students (who had studied with me and my colleague Dr. Imari Obadele) asked him about the historical argument for black reparations. He was negative and dismissive of the matter in that way he can do so sternly. A decade later, however, I saw Dr. Franklin for the last time in Tulsa, OK, not long after his last book Mirror to America had come out. By that time he was a champion for the fight for reparations for living descendants of the Tulsa (Black Wall Street) Holocaust of 1921 that wiped out his own father’s law practice and claimed so many other lives and property. It showed me his capacity to revise his thinking and develop his political horizons. Nuff Rispek Dr. Franklin — may your spirit continue to inspire us all and future generations in the struggle “from slavery to freedom.”

Poetry slams get big in Birmingham

The Birmingham News – al.com, AL – Dec 17, 2008
A first cousin of slam poetry is spoken word, a genre that gained popularity in the 1990s, says Amilcar Shabazz, chair of the WEB DuBois Department of … 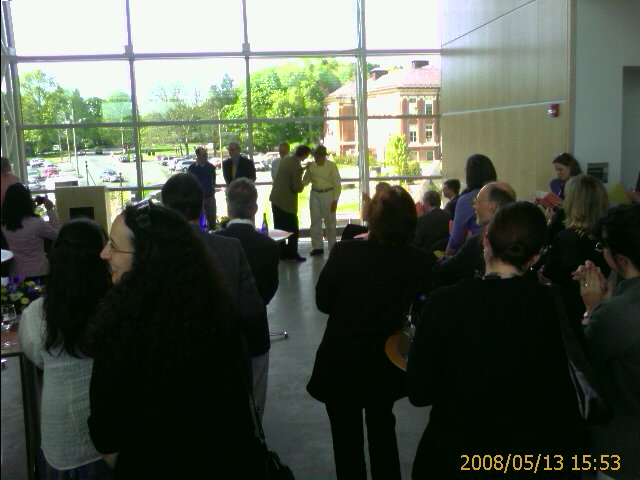 In the new Studio Arts Building on the UMass Amherst campus, CHFA Dean Joel Martin congratulates Du Bois faculty member Robert Paul Wolff who retires in August 2008 after teaching the past 100 semesters. He has taught at Harvard, the University of Chicago, Columbia University, and the University of Massachusetts, where he has been a faculty member since 1971. In 1992, he was invited to join the W.E.B. Du Bois Department of Afro-American Studies to assist in the establishment of a doctoral program, which he has coordinated since it was established in 1996.

In 2005 Wolff published Autobiography of an Ex-White Man. Wolff will be Professor Emeritus in the upcoming fall semester. We will miss you Bob! 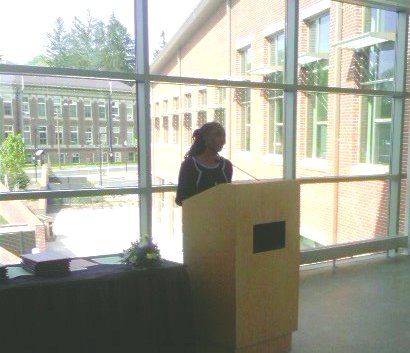 The Convocation was also an opportunity to look to the future of the HFA College. A Yemisi Jimoh, who teaches literature in the W.E.B. Du Bois Department of Afro-American Studies at the University of Massachusetts Amherst, headed the 2007-2008 Visioning Committee of the College of Humanities and Fine Arts. At the CHFA Convocation she was recognized, along with the other Committee members, for their exemplary service to the College in selecting the recipients for the College’s first Vision Grants.

James Smethurst and Du Bois Chair Amilcar Shabazz were among those faculty who received Visioning Grants. Their proposal, “Visions of Empowerment: A Du Bois Classroom on Art & Freedom,” received one of the largest grants of those awarded this year. It was selected for the way that it expands the vision of the College of Humanities and Fine Arts as well as foster excellence through collaborative work and new initiatives. The grant will help the Du Bois Department organize a series of events that explore the intersection of the Black Arts and Black Power movements of the 1960s and 1970s and the enduring impact they have had on U.S.society and beyond.

“Created by an anonymous donor, The Esther M. Terry Award is the first fund in the W.E. B. Du Bois Department of Afro-American Studies designed to build scholarship in Afro-American life and letters.” — Click picture to read full story…and then give, if you can!