Dr. Amilcar Shabazz is a professor in the W. E. B. Du Bois Department of Afro-American Studies, University of Massachusetts Amherst, and he teaches in the area of historical studies with an emphasis on the political economy of social and cultural movements, education, and public history. In 2013, Shabazz was appointed Faculty Advisor for Diversity Campus in the Office of the Chancellor of the UMass Amherst campus. Before that he served for five years as the chair of the Du Bois Department. He writes that he did not choose to become a professor and a historian; the vocation chose him. “When I was a skinny boy in the Pear Orchard of Beaumont, Texas, my homeys nicknamed me Professor Peabody. Remember the bespectacled beagle who appeared in segments called Peabody’s Improbable History on the 1960s television animated series The Rocky & Bullwinkle Show ? He had the WABAC (pronounced “wayback”) time machine which he and his boy Sherman would use to travel back in time to witness historical events and ultimately to fix problems so that history would be accurate. Funny how folks could see your future before you saw it yourself.    _________________________________________________________________________

My book Advancing Democracy: African Americans and the Struggle for Access and Equity in Higher Education in Texas (University of North Carolina Press, 2004), received numerous honors including the T.R. Fehrenbach Book Award and being ranked a top ten nonfiction book by Essence Magazine. Shabazz has also published The Forty Acres Documents, a sourcebook on reparations, along with journal articles, book chapters, reviews and writings in publications as diverse as The Source Magazine of Hip-Hop Music, Culture & Politics. His newest book co-edited with Celia R. Daileader and Rhoda E. Johnson, is Women & Others: Perspective on Race, Gender, and Empire (Palgrave Macmillan Press, 2007). An international scholar, he is a Fulbright Senior Specialist and has done work in Brazil, Ghana, Japan, Cuba, Mali, France, Nicaragua, and Jamaica. Presently, he is completing an historical biography of an African American newspaper publisher and human rights activist entitled “Master of the Blast: Carter Wesley and the Struggle for National Liberation.” 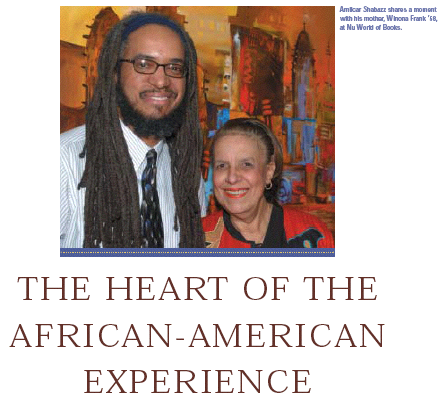 For a biographical essay, see “Amilcar Shabazz: The Heart of the African-American Experience,” Cardinal Cadence March-May 2004 (vol. 322), pp. 36-38, & available online as a PDF file by clicking the picture or this link: Cadence_vol322. See also biographical listings in Who’s Who in America, 58th edition (Marquis, 2004) and in the Directory of American Scholars, 10th edition (Gale Group, 2001).

Pictured to the right from the article in the May 2004 Cardinal Cadence is Shabazz’s mother Ms. Winona Frank. As one of the first African Americans to break the color line at Lamar University in 1956 and to obtain a degree there in 1958, she was inducted into the Beaumont Women’s Hall of Fame in 2006. Her story and that of many others who transgressed the racist conventions of their times is told in Advancing Democracy: African Americans and the Struggle for Access and Equity in Higher Education in Texas. See the BOOKS tab above to learn how the book came about. 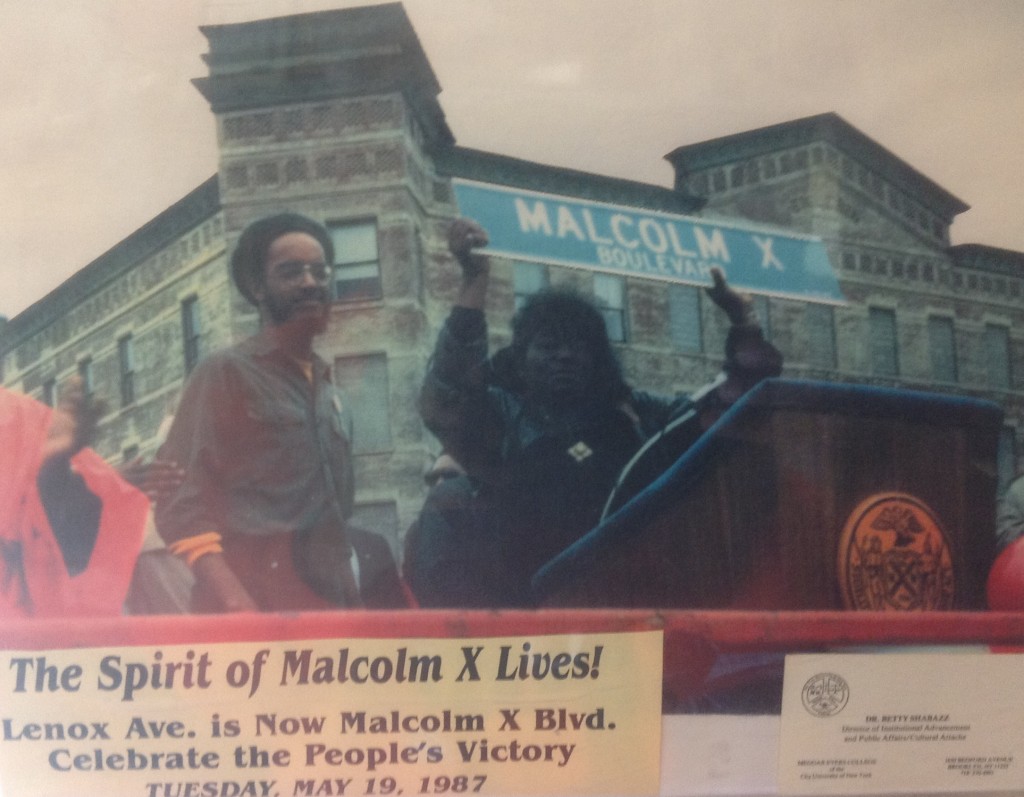 VOYAGE OF DISCOVERY
“Dr. King talks about his epiphany in the kitchen where he felt called on to what he went on to do. I had mine when I was walking back from UT [the University of Texas] to my little house in East Austin . . . I don’t know if you would say it was the spirit of Malcolm X, but certain emotions arose in me of his courage, his life of conviction and his self-determination. I remembered his quote, ‘Of all our studies, history is best qualified to reward our research,’ and was inspired to take on the work of researching history – particularly pages of history that have been lost or hidden or were distorted . . . He symbolized that for me, so I wanted to make his name part of mine.”
A photo on the wall of Amilcar Shabazz’s office bears witness to one of the proudest days in his life: the conclusion of a successful campaign to rename Lenox Avenue Malcolm X Boulevard. A massive platform stood at the intersection of streets honoring Malcolm X and Martin Luther King Jr. Through a public address system, the name-change ceremony resonated through Harlem. “They asked me to be the emcee,” Shabazz recalled. “So I’m up there with Betty Shabazz – a striking figure almost as tall as I and, oh, so gracious. I felt honored when she embraced me as a member of her family.”