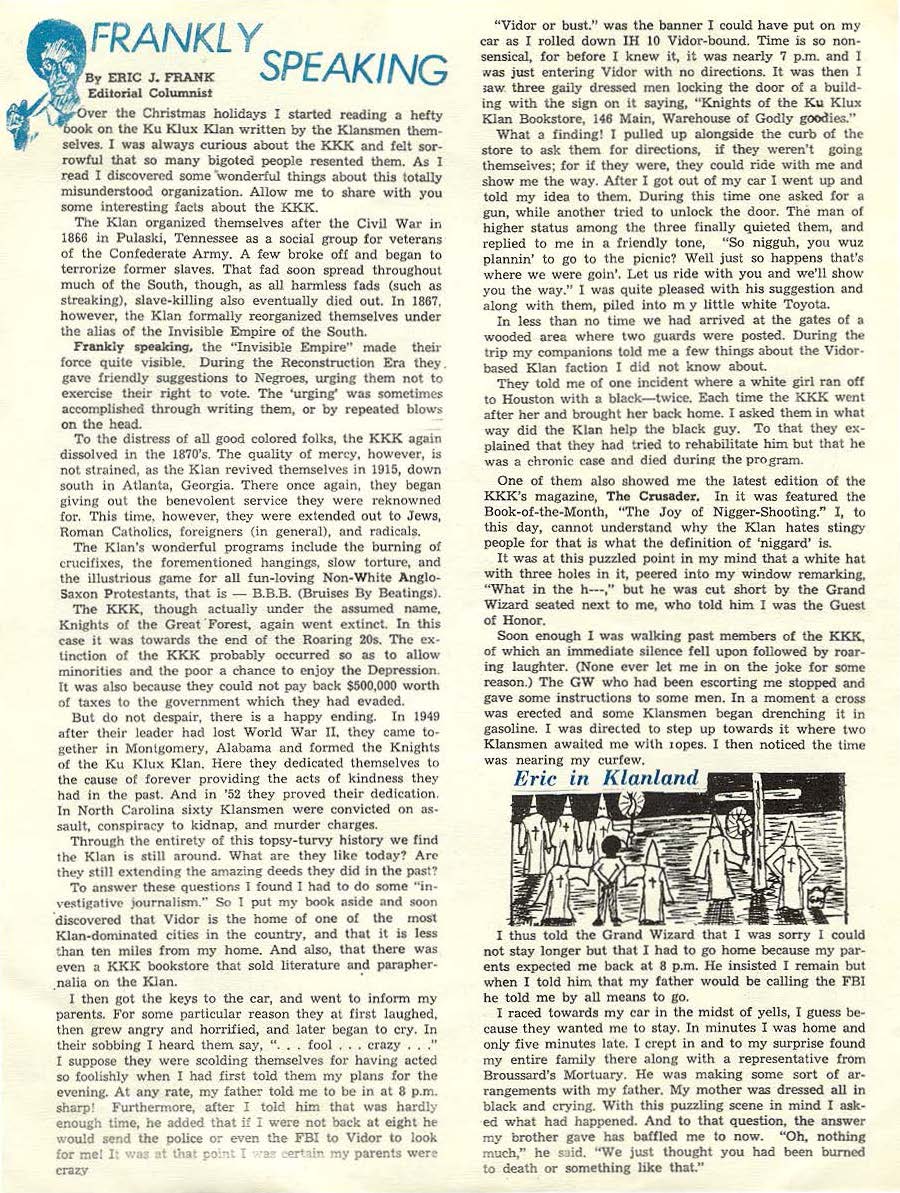 EricinKlanland is an editorial I published in The Spectator, the student newspaper of Monsignor Kelly High School in Beaumont, Texas, forty years ago. I was one of the student editor’s of the paper and my reading at the time Lewis Carroll’s Alice in Wonderland influenced how I wrote this piece. The image of me holding a pipe and the cartoon of Kluxers preparing to put me on a cross, was drawn by my friend and graphic artist for the paper, Mark Whitney.

The column’s title is a play on my paternal surname and Rhett Butler’s infamous response to Scarlett O’Hara, “Frankly, my dear, I don’t give a damn.” I sought to express my views on issues without giving a damn what authorities they might upset. As in Ephesians 6, I put on the full armor of god (Love), “For our struggle is not against flesh and blood; but against principalities and power, against the rulers of the world of this darkness, against the spirits of wickedness in the high places.”

One of my first columns landed me on the hot seat in the office of Sister Jane Meyer, the then principal of Kelly H.S., in 1976 when I was 15 years old. It questioned why my Catholic high school was admitting so many white non-Catholics whose only reason to attend Kelly was the fact that racial integration of the city’s public schools was beginning to be enforced. I linked my moral concern with white resistance to racial integration to Pope Paul VI’s Christmas 1975 enactment of the rite of closing the Holy Door.

The Holy Father closed the two sides of an ancient Vatican door while reciting the words: “Christus heri et hodie, principium et finis; Ipse aperit et nemo claudit; claudit et nemo aperit. Ipsi gloria et imperium per infinita sæcula sæculorum” (Christ the same yesterday, and to day, the beginning and the end; He opens and no one shuts; shuts and no one opens. To him be glory and dominion throughout all the endless ages of the ages). For me this ritual and Il Papa’s words, called upon Catholics to follow the way of the Christ/Cross. It said don’t sell out and associate with Protestants on the grounds of white unity (racial supremacist false consciousness). Instead, live up to the ideas in  POPULORUM PROGRESSIO (The Encyclical of Pope Paul VI “ON THE DEVELOPMENT OF PEOPLES” of MARCH 26, 1967). 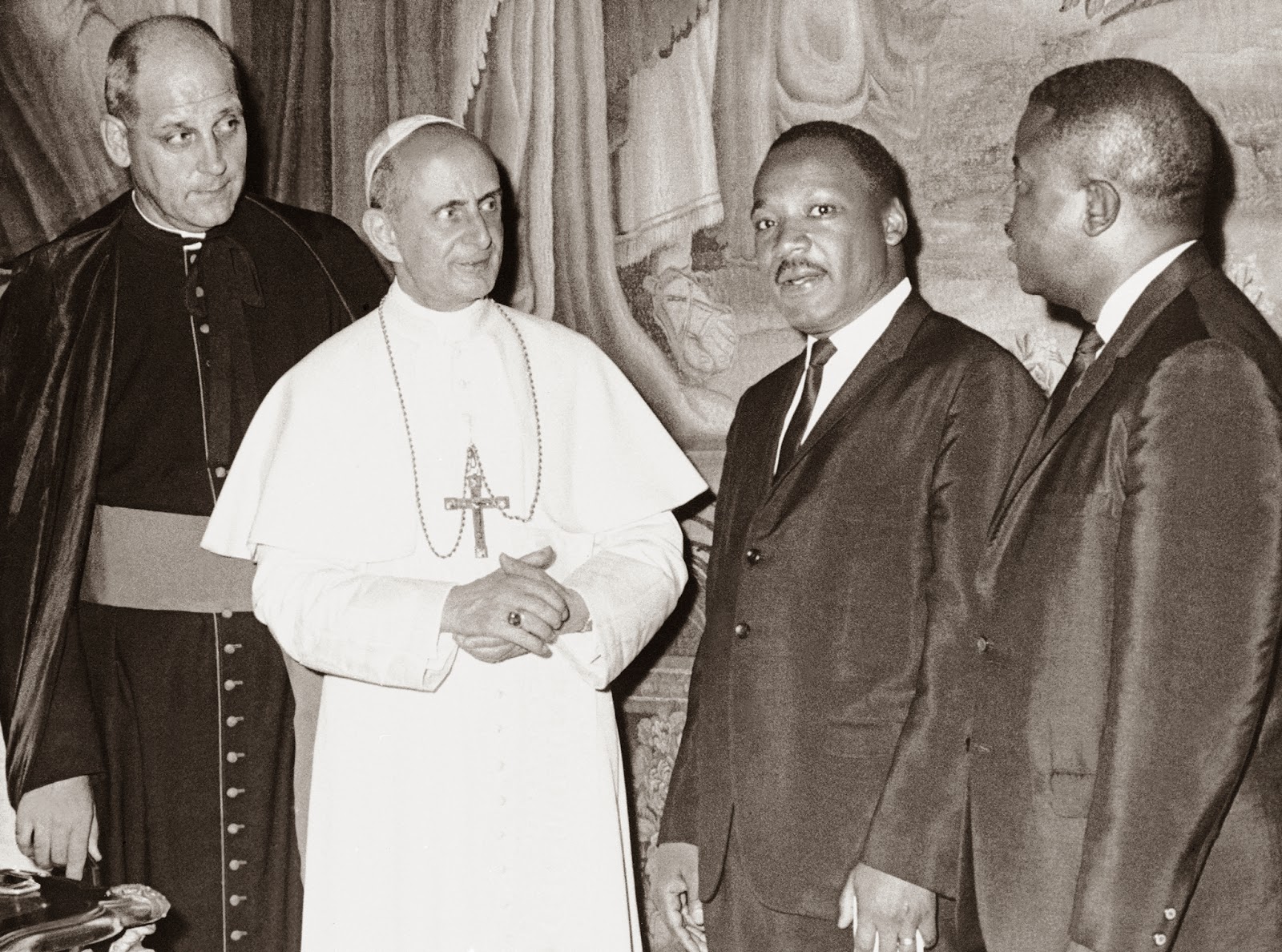 I cannot not find the banned article that inspired Sister Jane to ask me if I did not like the high school and wanted to be expelled? Alas, I withdrew it and published “Eric in Klanland.” Overall my journalistic efforts received more positive feedback than negative, and I salute Dr. Mary Gagné who taught me and supported me and did so much to help me be a better writer. She is today is director of The Texas Academy for Leadership in the Humanities on the Lamar University campus, founded in 1994 as a co-educational, residential, public institution for gifted Texas high school juniors and seniors.

Dr. Gagné (and Sister Jane) both signed my Outstanding Achievement in Journalism certificate when I graduated in 1977. She encouraged me to submit my work to the 6th Annual Texas Catholic Interscholastic League Rally for Non-Athletic Events held at the University of Dallas, March 11-12, 1977, for which I received the “Best Editorial” Award in the Newspaper area. Before that I won a medal for my piece “Twilight Zone” at the Interscholastic League Press Conference in competition with over 600 student writers from across the sate of Texas. She also nominated me to be one of ten high school students  from Southeast Texas to attend the 4th annual summer journalism workshop at Lamar University in 1975.

Also, through Dr. Gagné’s recommendation,  I wrote a features column for the daily newspaper The Beaumont Enterprise and worked (for pay!) as an assistant in the paper’s Sports Department to Joe Heiling. I knew very little about sports, but Heiling was a nice man and I later learned, as president of the Baseball Writers of America, he successfully lobbied to induct Pittsburgh Pirates outfielder Roberto Clemente into the Hall of Fame in 1973, bypassing a mandatory five-year waiting period.

My loving journalism and writing had its foundation not in high school, however, but with my schoolteacher mother, who wrote beautifully and prodigiously. Also, my teachers at my all-black, segregated elementary and junior high schools instilled in me a love of well written stories, poems, letters, essays, and books. In the early 1970s, at John P. Odom Jr. High School, I contributed to our mimeographed paper, “What’s Happening.”

Such was the path that led me in 2009, being named a member of the Texas Institute of Letters for distinctive literary achievement, as well as my book Advancing Democracy, receiving The T. R. Fehrenbach Book Award, the History of Education Society Outstanding Book Honorable Mention, and being listed as an Essence Magazine Top-Ten Recommended Book, among other accolades.

The writing life continues despite the call that I received threatening my life four decades ago when I published this “Eric In Klanland.”