A Raetic inscription incised on a small bronze plaque was published in the 2006 issue of ArchaeoTirol (see photograph). The plaque was found in a religious sanctuary discovered at Demlfeld in Ampass near Innsbruck. Excavators have recovered over 2,000 objects, mostly votive offerings, including the bronze head of a hippocampus with a Venetic inscription on the reverse: vhilone.i. /filo(:)nej/.

The plaque has four words arrayed in three lines. Portions of two letters, alphas, are visible on the 2nd line. It is possible that there was another line of text at the top of the plaque, but no letterforms are visible. Each word is written inside a box demarcated by puncts. The inscription reads as follows:

It is possible to offer a partial interpretation of lines 3-5 of the text: “X (the object to which the plaque was affixed) was dedicated to Kleimunte by Aruashuera.” Following this interpretation, upiku is a deverbal derivative in -ku, kleimunteis a dedicatory genitive, and avaσ́uerasi a pertinentive specifying the person by whom the object was dedicated. The form and function of  tauke and ihi are not clear. (I note that the transcription in ArcheoTirol of the final word is iẹi, but the medial sign is an <h>.)

My colleague, Carlo de Simone, mentions an intriguing morphological analysis for avaσ́uerasi. He suggests that the form is a plural pertinentive, in which case the composition would be avaσ́ue-ra-si. Compare, for example, Etruscan clavtieθu-ra-si ‘members of the Clavtie-family’ (r-plural, s-pertinentive). 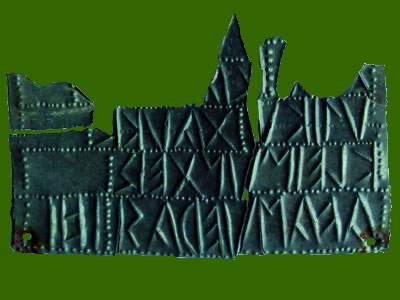