Entanglement is one of the most counterintuitive and “spooky” features of quantum mechanics. The information theoretic perspective of quantum entanglement entropy has proven an increasingly useful tool to understand and classify quantum phases of matter, and it has already revolutionized our understanding of the equilibrium properties of strongly-interacting quantum systems. Quantum information promises to do the same for non-equilibrium quantum dynamics. I am broadly interested in entanglement properties of many-body quantum systems, both at zero temperature and in non-equilibrium settings. This includes the study of topological phases of matter that have a long-range pattern of entanglement, and quantum phase transitions between distinct topological phases. Recently, I have also been interested in the “geometry” of quantum entanglement, tensor networks, and “entanglement phase transitions” where entanglement changes abruptly at a critical point. 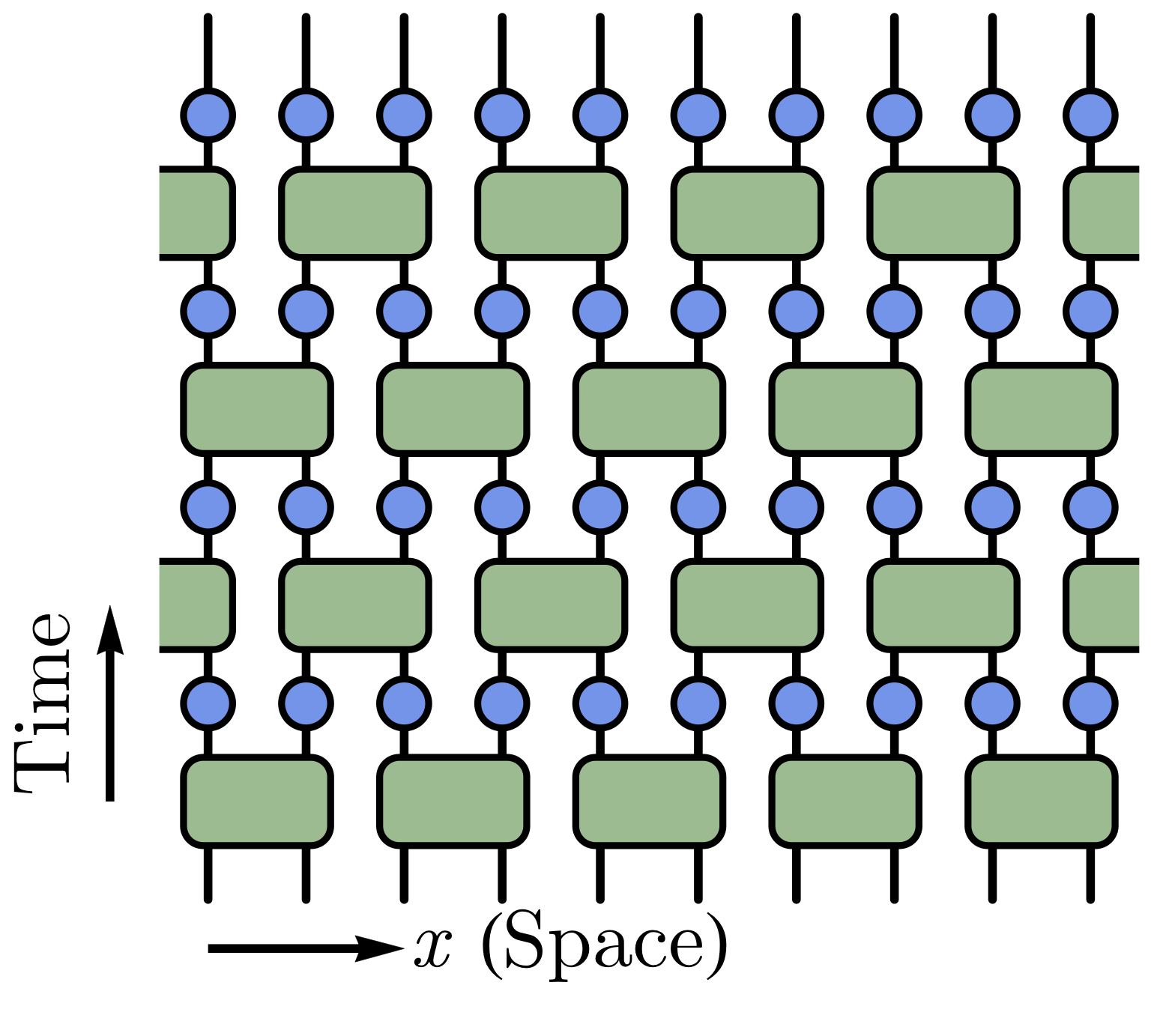 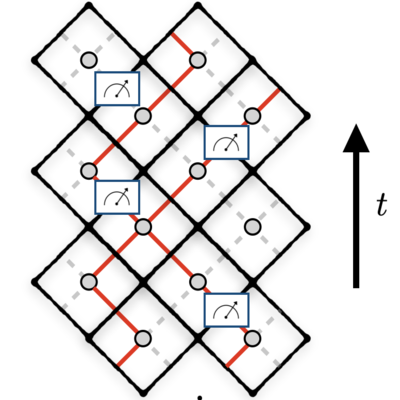 between area-law and volume-law entanglement scaling. We found that MRCs with a conserved charge additionally exhibit two distinct volume-law entangled phases that cannot be characterized by equilibrium notions of symmetry-breaking or topological order, but rather by the non-equilibrium dynamics and steady-state distribution of charge fluctuations. These include a charge-fuzzy phase in which charge information is rapidly scrambled leading to slowly decaying spatial fluctuations of charge in the steady state, and a charge-sharp phase in which measurements collapse quantum fluctuations of charge without destroying the volume-law entanglement of neutral degrees of freedom. We used statistical mechanics and effective field theory approaches to such charge-sharpening transitions, and related them to the efficiency of classical decoders to “learn” the global charge of quantum systems from local measurements. 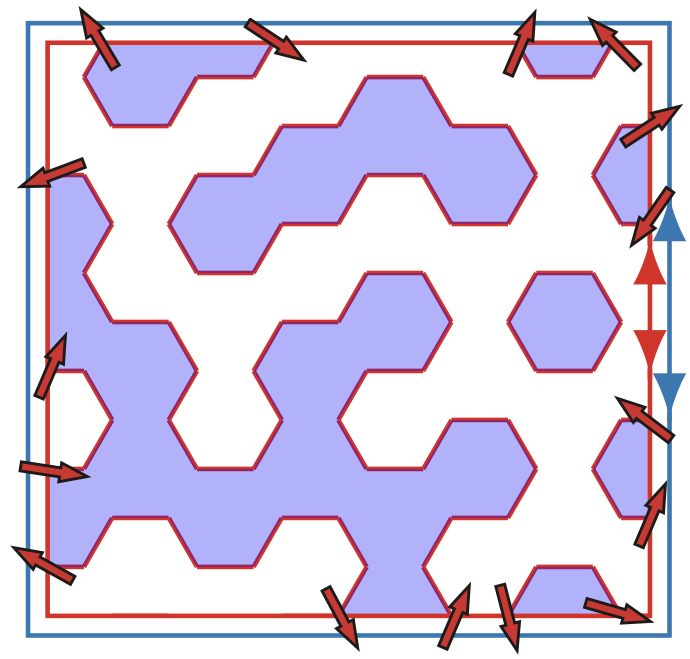 A key realization over the past decades has been the role of topology in the understanding of quantum phases of matter. Topological phases of matter lack a conventional description in terms of a local order parameter, and they can show quantized properties and protected surface states, as exemplified by the celebrated topological insulators. Most topological phases enjoy a bulk gap which plays a crucial role in the protection of the topological properties. To go beyond the recent examples of non-interacting gapless topological materials such as Weyl semimetals, we have undertaken the study of a new class of strongly interacting quantum systems that are gapless in the bulk with topologically protected edge modes as long as certain symmetries are preserved. Despite the absence of a bulk gap, the topological edge modes in such gapless symmetry protected topological (gSPT) systems are robust to arbitrary symmetry-preserving boundary perturbations and require no fine-tuning beyond closing the bulk gap, leading to unusual surface criticality. We also found that symmetry-broken phases proximate in phase space to symmetry-protected topological phases can exhibit dynamical signatures of topological physics. This dynamical, symmetry-protected “topological” regime is characterized by anomalously long edge coherence times due to the topological decoration of quasiparticle excitations, even if the underlying zero-temperature ground state is in a nontopological, symmetry-broken state. Recently, I have also been working on deconfinement topological phase transitions in disordered gauge theories, and on symmetry-enriched quantum critical points and phases in disordered systems. 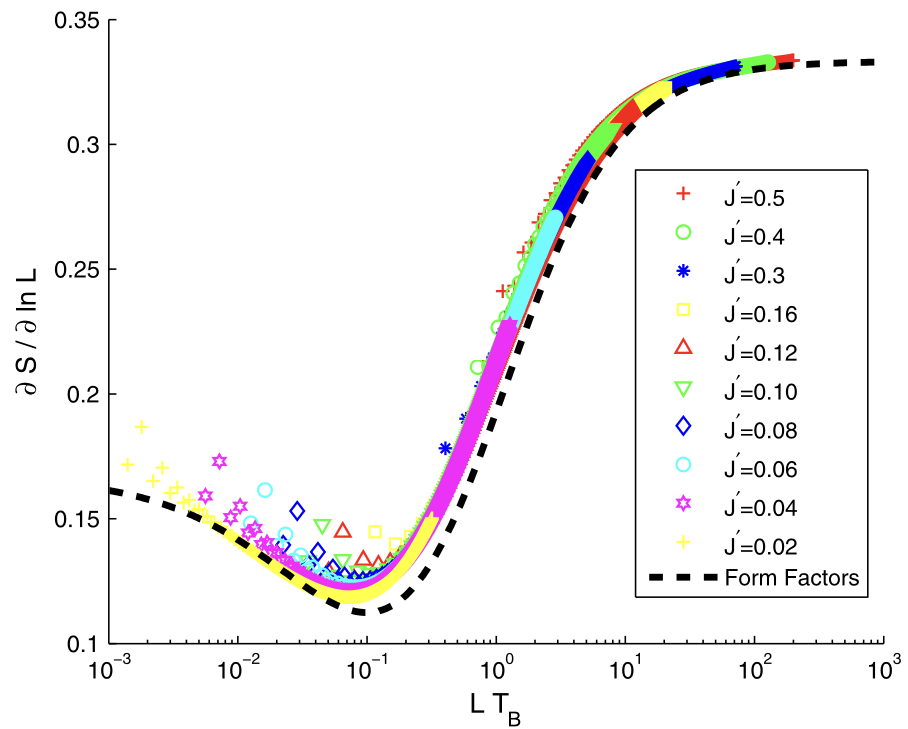 The study of two metallic leads (Fermi or Luttinger liquids) connected by some sort of quantum impurity has become paradigmatic in modern quantum physics. It plays a particularly important role in the context of local quenches, transport through quantum dots, and the dynamics of magnetic impurities. An essential feature of these systems is the existence of crossover scales, which play a role similar to the Kondo temperature in the Kondo problem (a magnetic impurity in a Fermi sea), and qualitatively separate weak and strong coupling regimes. Using a strategy based on the integrable structure of the quantum field theories describing the low-energy physics of such quantum impurity problems, we were able to compute non-perturbatively the scaling of the entanglement entropy along this Kondo crossover. We also proposed an exact formula for overlaps (matrix elements) in the Kondo problem. The figure shows the universal scaling form of the entanglement entropy between two quantum wires connected through a quantum dot with Kondo temperature T_B.

One of the most basic questions about quantum dynamics is the response of a system to a sudden change of the Hamiltonian in a small region in space. An early experimental example of a “local quantum quench” from solid-state physics is the excitation of a core level by an incident photon of high energy, which appears to the conduction electrons as a sudden change in the local electrostatic potential. This led to the development of important concepts in many-body theory such as that of an orthogonality catastrophe, which is a decay with system size in the overlap of ground states of the initial and final Hamiltonians. We studied the response to a local perturbation of random (disordered) spin chains, and showed that, surprisingly, they exhibit a power-law orthogonality catastrophe similar to that in metals, even though the system is insulating. The entanglement structure of the groundstate wave function around the local perturbation shows a universal crossover that is similar to that in Luttinger liquids.