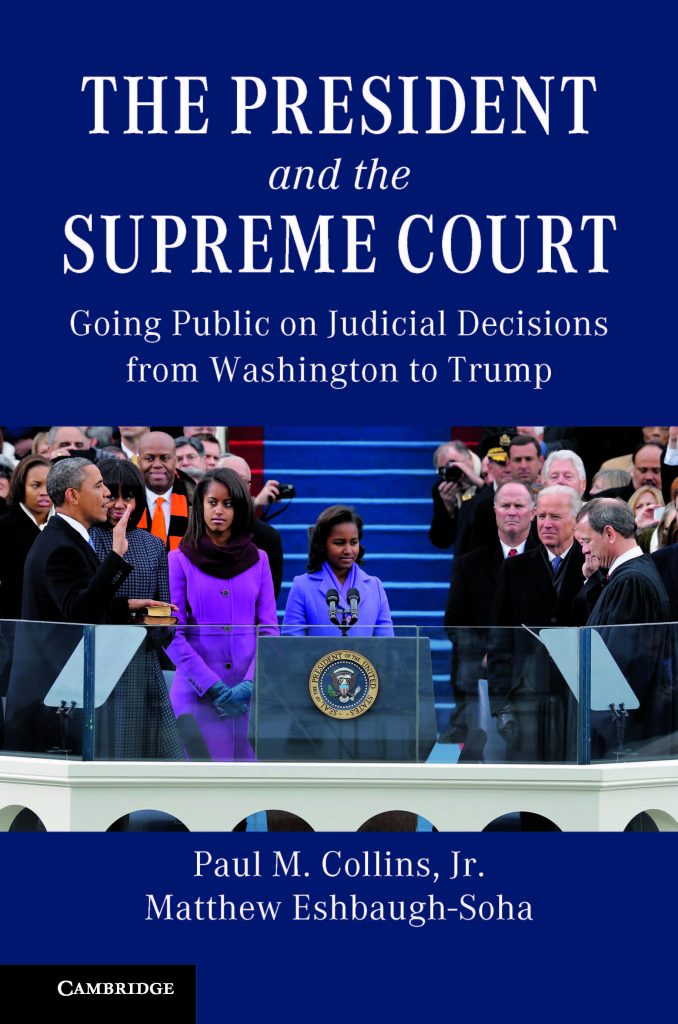 When presidents take positions on pending Supreme Court cases or criticize the Court’s decisions, they are susceptible to being attacked for acting as bullies and violating the norm of judicial independence. Why then do presidents target Supreme Court decisions in their public appeals? In this book, Paul M. Collins, Jr and Matthew Eshbaugh-Soha argue that presidents discuss the Court’s decisions to demonstrate their responsiveness to important matters of public policy and to steer the implementation of the Court’s decisions. Using data from Washington to Trump, they show that, far from being bullies, presidents discuss cases to promote their re-election, policy goals, and historical legacies, while attempting to affect the impact of Court decisions on the bureaucracy, Congress, the media, and the public.

“Collins and Eshbaugh-Soha’s book is well written and would be an excellent addition to any undergraduate or graduate course on American political institutions. It is straight-forward, easy to follow, and rich with examples that provide helpful context. That is not to say their book is not a significant contribution of scholarly work. This research provides an important theoretical foundation as to why presidents use their bully pulpit regarding the Court outside of confirmation hearings, something the discipline has long needed. Furthermore, it acknowledges important theoretical debates, most prominently the idea of judicial independence and coordinate construction, but in a modern way. Simply put, this work is accessible for those just learning about American government and still interesting and enjoyable to those who are well acquainted with this literature.

“Paul Collins’s and Matthew Eshbaugh-Soha’s work contributes in several ways to our understanding of the president’s influence on public opinion of the Supreme Court in specific cases and as an institution more broadly. First, they speak to a broad swath of our discipline by drawing from a wide range of scholarly literatures on the president, Supreme Court, Congress, public policy, public opinion, media, separation of powers, constitutional interpretation, judicial independence, and executive–judicial relations. Second, the topic of their work (and for the most part the presentation of their empirical findings) appeals to a broader public audience than most related scholarly works. Third, they have compiled a rich, novel database of the president’s public comments (written and spoken) about Supreme Court cases. These data offer a much more detailed understanding of what cases presidents focus on in public comments (pending, recently decided, and historical), the timing of their comments, the tone they take, at whom those comments are directed (media, Congress, or the bureaucracy), and especially why ‘they go public.’”

This file contains the Presidential Speeches on Supreme Court Decisions Database. The data are in Excel, SPSS, and Stata formats, compressed in a ZIP file. To download the database, click here: Download Data.

This file contains the data and do files to replicate the empirical analyses in the book. The data are in Stata format, compressed in a ZIP file. The Stata code to replicate the models appears in the accompanying do files. To download the data and replication materials, click here: Download Data.

“How Conservative Groups will Advance their Agendas before a Supreme Court with Amy Coney Barrett” was published in The Conversation.

Collins elected President of the Consortium for Undergraduate Law and Justice Programs.

The President and the Supreme Court: Going Public on Judicial Decisions from Washington to Trump, coauthored with Matthew Eshbaugh-Soha, was published by Cambridge University Press