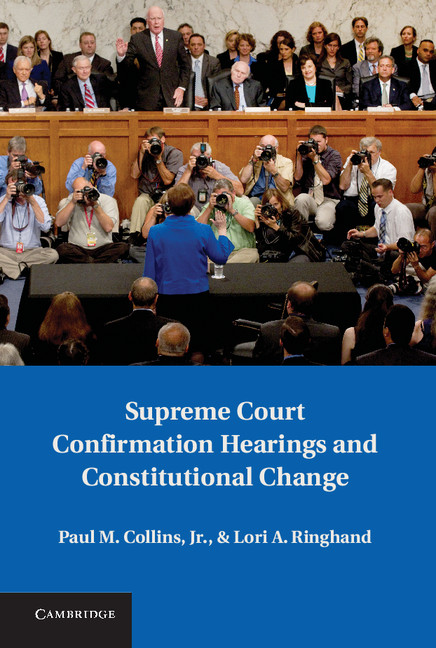 Before Supreme Court nominees are allowed take their place on the high Court, they must face a moment of democratic reckoning by appearing before the Senate Judiciary Committee. Despite the potential this holds for public input into the direction of legal change, the hearings are routinely derided as nothing but empty rituals and political grandstanding. In this book, Paul M. Collins, Jr. and Lori A. Ringhand present a different view. Using both empirical data and stories culled from more than seventy years of transcripts, they demonstrate the hearings are a vibrant and democratic forum for the discussion and ratification of constitutional change. As such, they are one of the ways in which “We the People” take ownership of the Constitution by examining the core constitutional values of those permitted to interpret it on our behalf.

Supreme Court Confirmation Hearings and Constitutional Change was recognized by Choice as a 2014 Outstanding Academic Title.

“This book does exactly what a scholarly manuscript ought to do: It offers a novel theoretical interpretation of a long-known phenomenon, makes arguments backed up with empirical evidence and accompanied by real-life examples, and makes one think. While it remains debatable whether theirs is the ‘right’ view of the phenomenon under study, it is absolutely the case that it ought to be taken seriously and widely discussed and debated.”

“Collins and Ringhand’s SUPREME COURT CONFIRMATION HEARINGS AND CONSTITUTIONAL CHANGE is an important addition to the literature on Supreme Court selection politics generally and the most important study available on confirmation hearings per se. More generally and, at least as importantly, it carries important messages about the interface between confirmation politics and democratic theory, ones that have certainly changed the way I will view and evaluate Supreme Court confirmation hearings past and future.”

“Conventional wisdom suggests that confirmation hearings of Supreme Court justices before the Senate Judiciary Committee are broken, but Collins (Univ. of North Texas) and Ringhand (Univ. of Georgia School of Law) present a sophisticated, empirically grounded argument that suggests that they are not. Indeed, Collins and Ringhand celebrate the process for conveying to nominees evolving constitutional understandings. This book is a game changer. Summing Up: Highly recommended.”

“It is unusual that a book challenges a strong conventional wisdom and persuasively argues against it, but in Supreme Court Confirmation Hearings and Constitutional Change Paul Collins and Lori Ringhand successfully do just that. …In summary, this is a great book and a must read for anybody who feels the confirmation hearings lack meaning in our constitutional system of government.”

-Justin Wedeking, University of Kentucky, in Perspectives on Politics

This file contains The U.S. Supreme Court Confirmation Hearings Database. The data are in Excel, R, SPSS, and Stata formats, compressed in a ZIP file. To download the database, click here: Download Data.

This file contains the data and do files to replicate the empirical analyses in the book. The data are in Stata format, compressed in a ZIP file. The Stata code to replicate the models appears in the accompanying do files. To download the data and replication materials, click here: Download Data and Do Files.

“How Conservative Groups will Advance their Agendas before a Supreme Court with Amy Coney Barrett” was published in The Conversation.

Collins elected President of the Consortium for Undergraduate Law and Justice Programs.

The President and the Supreme Court: Going Public on Judicial Decisions from Washington to Trump, coauthored with Matthew Eshbaugh-Soha, was published by Cambridge University Press