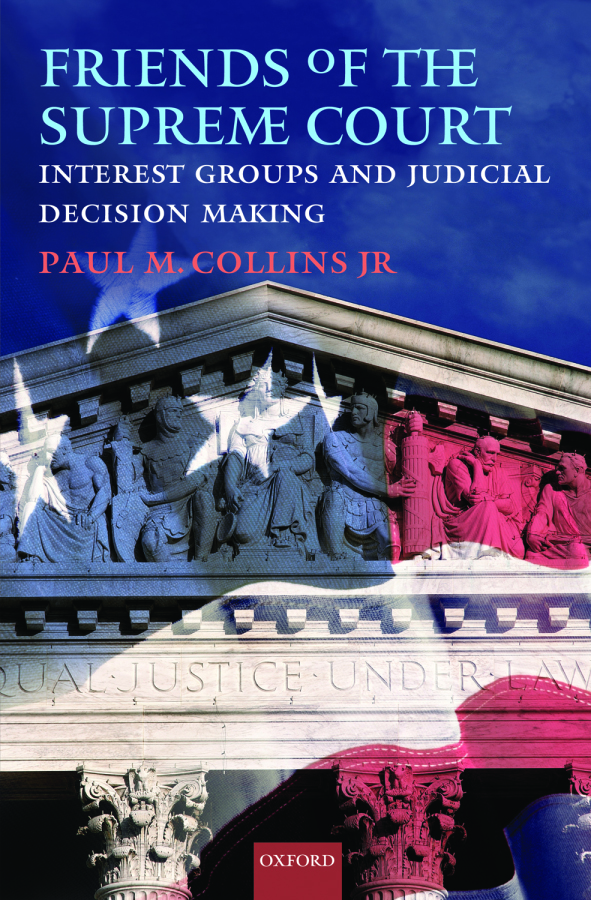 Friends of the Supreme Court is also available through Oxford Scholarship Online.

The U.S. Supreme Court is a public policy battleground in which organized interests attempt to etch their economic, legal, and political preferences into law through the filing of amicus curiae (“friend of the court”) briefs. In Friends of the Supreme Court: Interest Groups and Judicial Decision Making, Paul M. Collins, Jr. explores how organized interests influence the justices’ decision making, including how the justices vote and whether they choose to author concurrences and dissents. Collins presents theories of judicial choice derived from disciplines as diverse as law, marketing, political science, and social psychology. This theoretically rich and empirically rigorous treatment of decision making on the nation’s highest court, which represents the most comprehensive examination ever undertaken of the influence of U.S. Supreme Court amicus briefs, provides clear evidence that interest groups play a significant role in shaping the justices’ choices.

Praise for Friends of the Supreme Court

“Paul Collins presents a much-needed theory of interest group influence in the Supreme Court, and tests it in many innovative ways. In large part, Friends of the Supreme Court resolves the contentious question of whether or not interest groups affect Supreme Court decision making, and offers an inventive critique of the attitudinal model, complete with an entirely reasonable and new finding with respect to the influence of law. Given its use and reliance upon interdisciplinary scholarship, I am certain the legal academy will take notice, as will those interested in political science generally, judicial behavior specifically, and those studying interest group politics.”

—Sara C. Benesh, University of Wisconsin-Milwaukee, coauthor of The Supreme Court in the American Legal System.

“This is by far the most thoroughly documented, methodically sophisticated, and theoretically rich treatment of the role of amicus curiae in U.S. Supreme Court decision making that exists to date. Paul Collins’s research contributes significantly to the theoretical debate of whether law influences case outcomes at the Supreme Court. The data in Friends of the Supreme Court is incredibly comprehensive, covering thousands of Court decisions over an extended period of time, and the findings suggest an important shift in our understanding of judicial decision making, showing that amicus briefs exercise substantial influence over the justices’ decision making from the perspective of both the attitudinal and legal models. Collins takes care in weaving individual examples throughout the book—providing a terrific context for the non-social scientist to understand the conclusions drawn from the quantitative analyses.”

“Professor Collins provides a scholarly read that addresses a topic of consuming academic and legal interest. …He meticulously analyzes all aspects of amici participation not only in depth, but also longitudinally—from the beginning of the Vinson Court in 1946 to the end of the 2001 term. None have investigated the subject as comprehensively and thoroughly as Professor Collins, and I fully expect it to become the definitive work on amicus curiae participation and influence.”

“In Friends of the Supreme Court, Paul Collins makes an outstanding contribution to the literature on interest group litigation by expanding our empirical and theoretical knowledge of the influence of amicus briefs on the voting behavior of Supreme Court justices. …The findings of Collins’ research also carry normative significance for the rule of law by showing that the law matters to justices when they decide cases.  Not only has he provided a rigorous and theoretically-informed methodology to test the influence of amicus briefs on the justices’ decision making, but his findings provide empirical support for the assumption underlying most qualitative analyses of the Court – namely, that law matters.”

“Without question, this is one of the best books ever written on the role of organized interests in the U.S. Supreme Court. It is certainly the most comprehensive and compelling account of the impact of interest advocacy in the judiciary and will doubtless become the standard by which all subsequent scholarship will be measured. By marshalling an impressive array of data covering the entire length of the modern Court, Collins shows—in sophisticated yet accessible fashion—that interest groups underlie some of the most important facets of judicial policymaking.”

“ Not only does Collins provide insight into the independent influence of amicus on the decision making of the justices, but also contributes to the larger debate about the relative influence of policy preferences and law in judicial decision making. In the end, Friends of the Court provides serious fodder for scholars interested in the legal behavior of interest groups.”

—Rorie Solberg, Oregon State University, in the Journal of Politics.

“Friends of the Supreme Court is an exceptional work of scholarship. Social scientists from several disciplines as well as legal researchers will appreciate the theoretical depth and interdisciplinary approach. The book has obvious appeal for courses in judicial politics and public law. What makes this volume particularly appealing for students is the way the author elegantly interweaves cutting-edge methods of inference with examples from actual cases argued before the Supreme Court. This book is bound to become an authoritative source for scholars of judicial behavior and interest groups and for students at the graduate and undergraduate levels.”

The President and the Supreme Court: Going Public on Judicial Decisions from Washington to Trump, coauthored with Matthew Eshbaugh-Soha, received the 2021 Richard E. Neustadt Award for the best book on executive politics.

“Should the Supreme Court have Term Limits?,” coauthored with Artemus Ward, was published in The Conversation.

“The Supreme Court, the President, and Congress: Lawmaking in a Separation of Powers System,” coauthored with Matthew Eshbaugh-Soha, was accepted for publication in the Journal of Law and Courts.

“Hernández v. Mesa on Rights and Restitution for Victims of Excessive Force at the Border,” coauthored with Rebecca Hamlin, was published in SCOTUS 2020: Major Decisions and Developments of the U.S. Supreme Court.