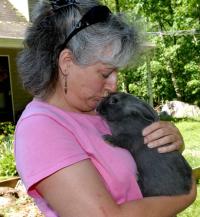 Michelle Chandler and one of her backyard meat rabbits

Michelle Chandler made a decision shortly after September 11, 2001 – she was going to be less dependent on fossil fuels and begin to live a more sustainable lifestyle.  The result is 100 rabbits, dozens of laying hens and a couple of milk goats in her suburban yard in South Amherst, MA.  Chandler quotes John 21:17, when Peter was asked by Jesus, “Do you love me?” Upon answering, “Yes,” Peter is instructed to “feed my sheep.”

Chandler’s “sheep” are her four children, ages 8 to 13, as well as neighbors and friends who enjoy the results of her bounty produced at Blessed Acre Farm and Rabbitry, where she raises several rare and heritage rabbit breeds – Cinnamons, Thriantas, Californians, Cremes d’Argent, Palominos, and American Blues.

According to an article in her local newspaper, those interested in raising rabbits should start with three, which would cost about $60 to get started. “For someone who wants rabbit on the table once a week for a family of four, you could realistically get by with one buck and two does,” she said. Then there’s the cost of building or buying hutches, at around $50 to $75 apiece, and providing the feed. A 50-pound bag costs $14.

Although her own property was far enough from the center of town to be exempt, Chandler was instrumental in helping to pass a new bylaw that allows up to 12 chickens or rabbits by right anywhere in Amherst.

“I feel strongly that Amherst will be better served by being able to feed itself,” said Chandler. “People are always going to be hungry, and if people have another food source, that’s a good thing.”

One of Michelle Chandler’s close friends, Sharon Astyk, has written a book called “A Nation of Farmers” in which she claims raising your own food in the backyard must become a more common feature of the American landscape if we are to adjust to Peak Oil.  Chandler’s backyard has become a living example of this trend.