Here are some of the recent conferences and workshops I’ve attended, and other presentations I’ve delivered:

Abstract: At z > 1, a heavily dust-enshrouded population of star-forming galaxies may be observed. These submillimeter galaxies (SMGs) exhibit rapid conversion of gas into stars, with star formation rates reaching 100 – 1000 Msun/yr or greater. To adequately understand the physical processes fueling this stellar mass buildup, a resolution better than 100 pc is essential, requiring ~10 milliarcsec resolution for a z ~ 3 object—unachievable with any existing telescopes, except perhaps ALMA.

In recent years, strong gravitational lensing has been used to the observer’s advantage by circumventing these fundamental diffraction limits. We will present lens modeling results for a small subset of our sample of 28 Planck-selected lensed SMGs. In particular, we will apply our model to recent 6-GHz JVLA observations, combined with existing HST/WFC3 H160 imaging and ALMA CO(3-2)/dust continuum observations. Together, these observations probe the relative distribution of gas, dust, recent star formation, and existing stellar mass at high resolution. This, paired with CO spectral line kinematics, allows an initial interpretation of the galaxy structure and fueling of star formation for the SMGs in our sample. In particular, we will explore if the galaxies show signatures of an ongoing merger or an ordered rotating disk.

The Universe as a telescope: probing the cosmos at all scales with strong lensing

Special Symposium: Weak and strong-lensing techniques to unveil mysteries of the Universe 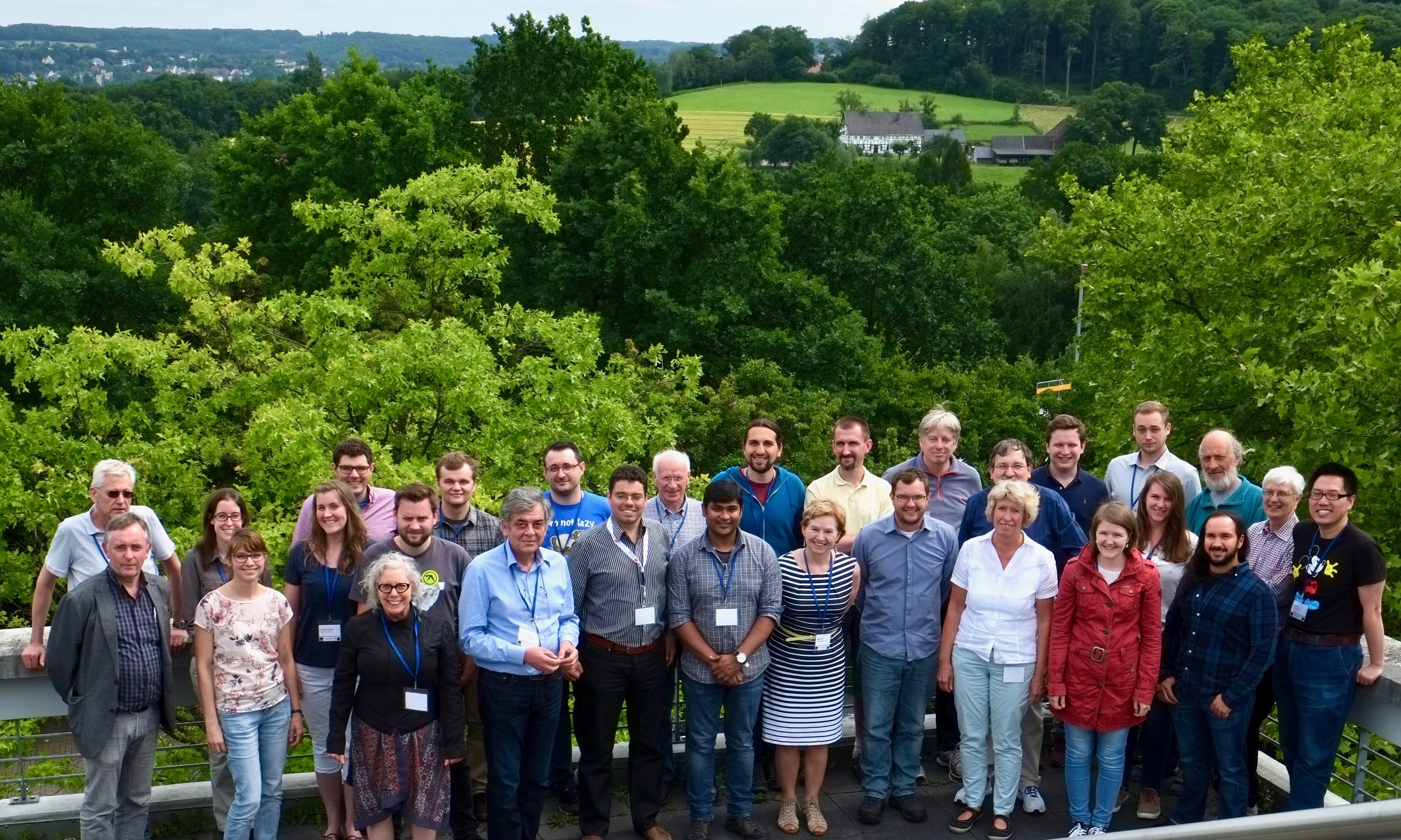 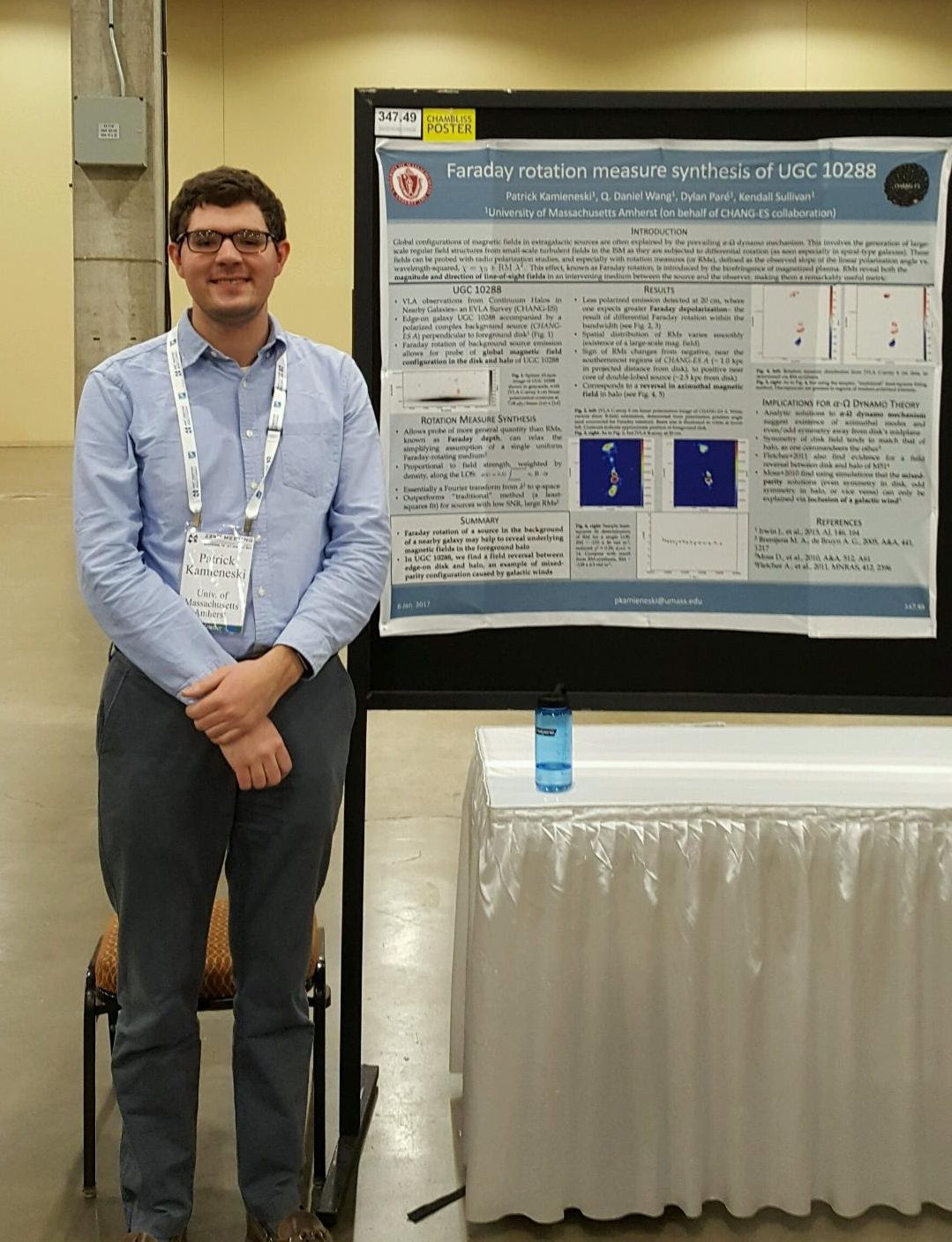 Abstract: Faraday rotation measure synthesis is a powerful tool that has been employed in the past decade when studying line-of-sight magnetic fields of galactic and extragalactic sources. Rotation measures, which are sensitive to the strength and direction of fields in an intervening medium between the source and observer, were classically determined by assuming a single, uniform Faraday-rotating medium. Rotation measure synthesis, on the other hand, is a more robust method that allows for probing a more complicated scenario. We will outline results from a study of magnetic field structure in the disk and halo of edge-on galaxy UGC 10288, using 6 cm and 20 cm observations from CHANG-ES (Continuum Halos in Nearby Galaxies – an EVLA Survey). The presence of a strongly polarized complex background source situated perpendicular to the foreground disk allows for an investigation of the disk-halo magnetic fields of UGC 10288. In particular, we present evidence of magnetic field reversals above the plane of the disk. This finding is not easily explained solely by the prevailing α-Ω dynamo mechanism. Rather, a field reversal may be indicative of different parities of the poloidal field components for the individual disk and halo mechanisms.

Abstract: The Asymptotic Giant Branch star W Hydrae (W Hya) is known to be a strong source of silicon monoxide (SiO) masers in its extended atmosphere. Jansky Very Large Array imaging observations obtained in February 2014 were used to target eleven SiO J=1-0 rotational transitions near 43 GHz. The vibrational ground state (v=0) lines for the 28SiO, 29SiO, and 30SiO isotopologues were successfully detected, as were the v=1,2,3 lines for 28SiO. Non-detections included the v=1,2 transitions for 29SiO and 30SiO, and the v=4 line for 28SiO. We will summarize the relative shape, size, and intensity of the emission regions of the detected transitions. We have discovered spatially extended ground-state 28SiO emission in a region located approximately 300 to 600 milliarcseconds (projected distance of 34 to 69 AU) from the star. We will discuss a saddle-like distribution and a small gradient in the velocity field for the 28SiO v=1 line, which may help to confirm the existence of a bipolar outflow in W Hya. Additionally, our results indicate that the observed transitions have differing spatial distributions. Peak 28SiO v=1,2,3 emission primarily occupies a region 12 – 42 mas (projected distance of 1.4 – 4.8 AU) west of the star, while the 29SiO and 30SiO isotopologues are located in disparate regions around 45 – 70 mas (5.2 – 8.1 AU) to the northwest of the star.This work was sponsored by a grant from the National Science Foundation Research Experience for Undergraduate program to MIT Haystack Observatory.

Using JVLA Observations of SiO Masers to Probe the Dynamics of an AGB Star: W Hydrae 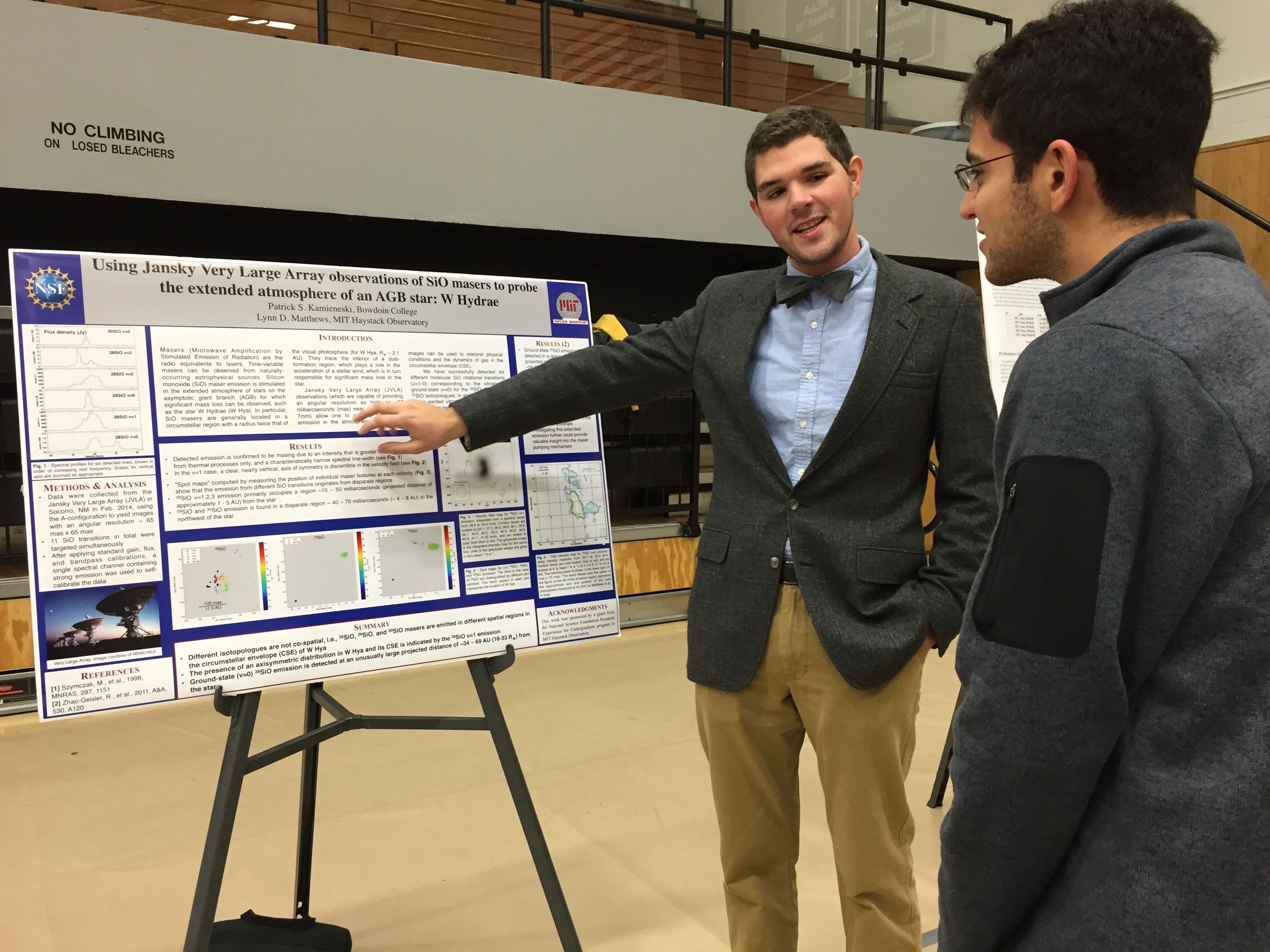