Here are some data gathered by Joe Pater and Yining Nie, about the questions asked at AMP 2017, at NYU.  Following last year’s report, participants are broken down by gender, as well as whether they are a student or not.  Unlike last year, the student/non-student cutoff is simply whether the person has a PhD or not, so post-docs and early-career linguists in visiting positions are counted as non-students.  Even though it’s inaccurate, I’m using the label ‘Professors’ to cover all non-students.

Please note that the data presented below do not include data on race representation at AMP. Yining actually did collect race data on presenters and question askers (thank you!). Out of 86 questions and 19 talks, only 4 came from non-white linguists.  If this extreme imbalance bothers you (and it should) I encourage you to listen to conversations that are happening at your university and others, and to consider how you can support the efforts of anti-racist activism in academia.  As a start, I suggest Dr. Marcia Chatelain’s recent article in the Chronicle of Higher Ed on the topic.

138 people were registered at AMP, including 54 faculty and post-docs, 78 graduate students, and 6 undergrads.  These participants were 62 female, 67 male, and 7 no response.  Thanks to Gillian Gallagher for these numbers!

The demographics of those giving presentations (‘Talkers’) skewed slightly more male than female, and slightly towards professors. This graph includes three invited speakers, two women and one man. 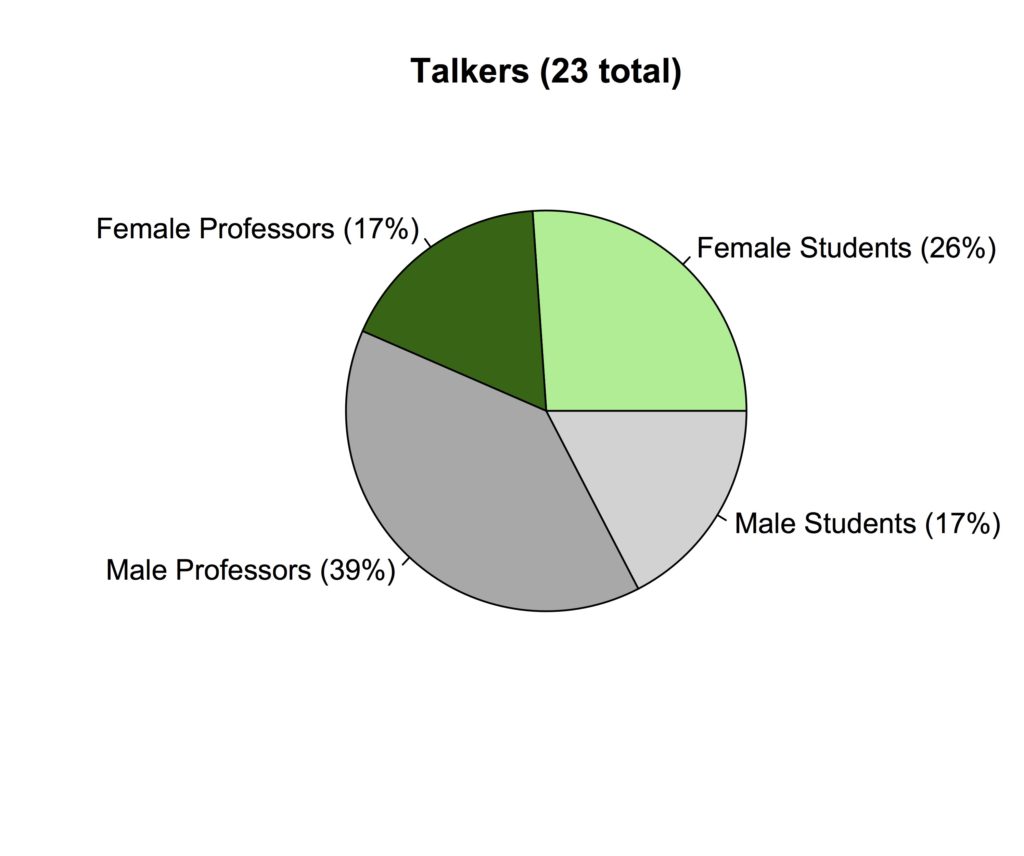 Questions came overwhelmingly from faculty this year, although they were nearly exactly balanced by gender.  (Compare to last year where the balance between faculty and students was more even, but the questions skewed much more male)  Also, there were quite a bit fewer questions overall this year than last year, though the number of talks was the same: 86 this year vs, 119 last year. 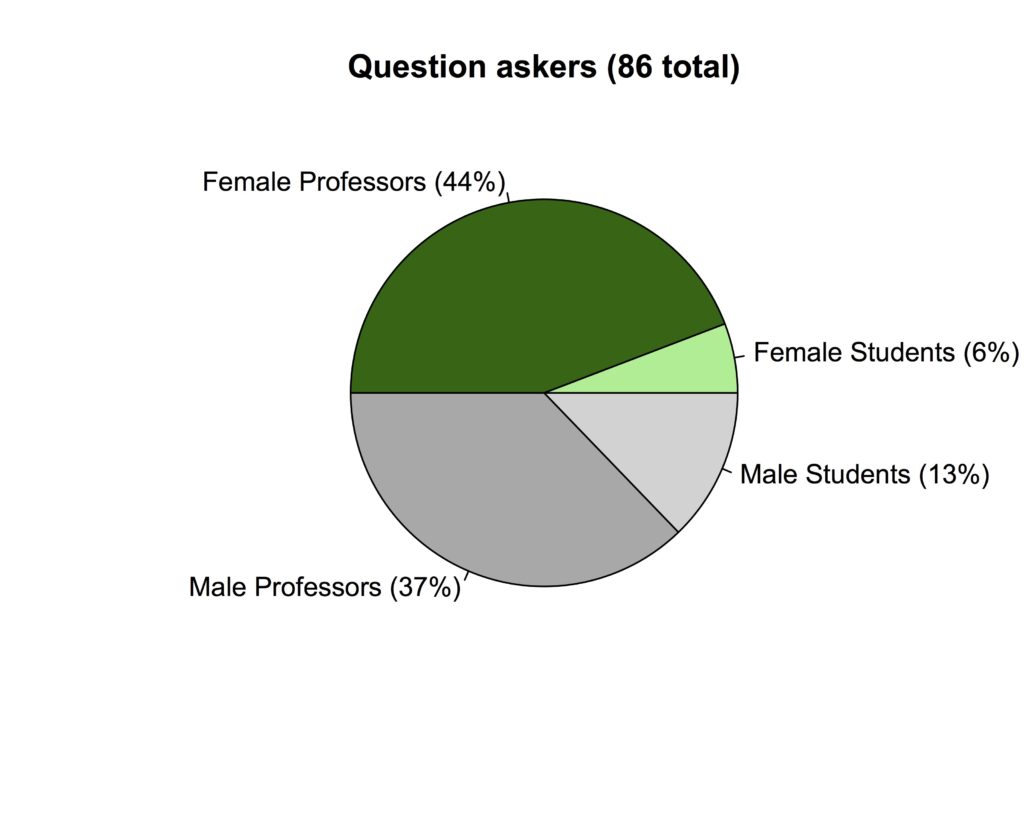 Interestingly, although the actual questions were balanced by gender, hands raised for questions were not balanced (thanks to Kie Zuraw for suggesting we do these counts).  Hand-raising data is somewhat difficult to collect (thank you Joe!), so we don’t have details beyond just overall gender counts for this one. 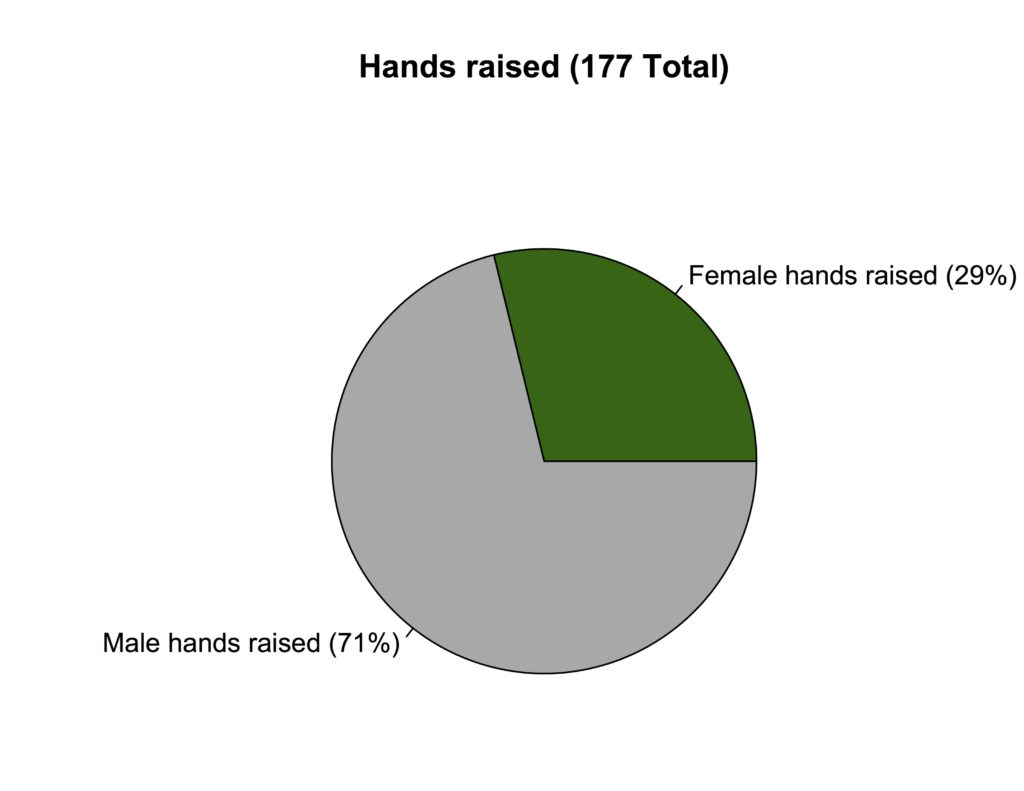 Often when I talk about question-asking stats like those of last year’s AMP, where more men asked questions than women, people assume that this is happening because women aren’t getting called on as much as men.  This data shows that at least for this conference, the opposite is true – 51 raised hands from women were counted, and 43 questions from women were counted total.  This means that nearly every woman who raised her hand got to ask her question.  On the other hand, 126 men raised their hands total, and only 43 men asked questions.  This graph also shows that women are far more conservative as a group than men in raising their hands for questions.  Perhaps women only raise their hand when they are fairly certain they will be called on? (they are in the front, it is the first question, there are no other hands raised, etc.)  What these data definitely show is that solving the gender gap in many conference question periods is not going to be as simple as preferentially calling on women.

For those who would like to see the data broken down a little more by individual talks, here is a graph showing the breakdown of questioner types for each talk.  The gender and career status of the talkers is noted along the x axis. 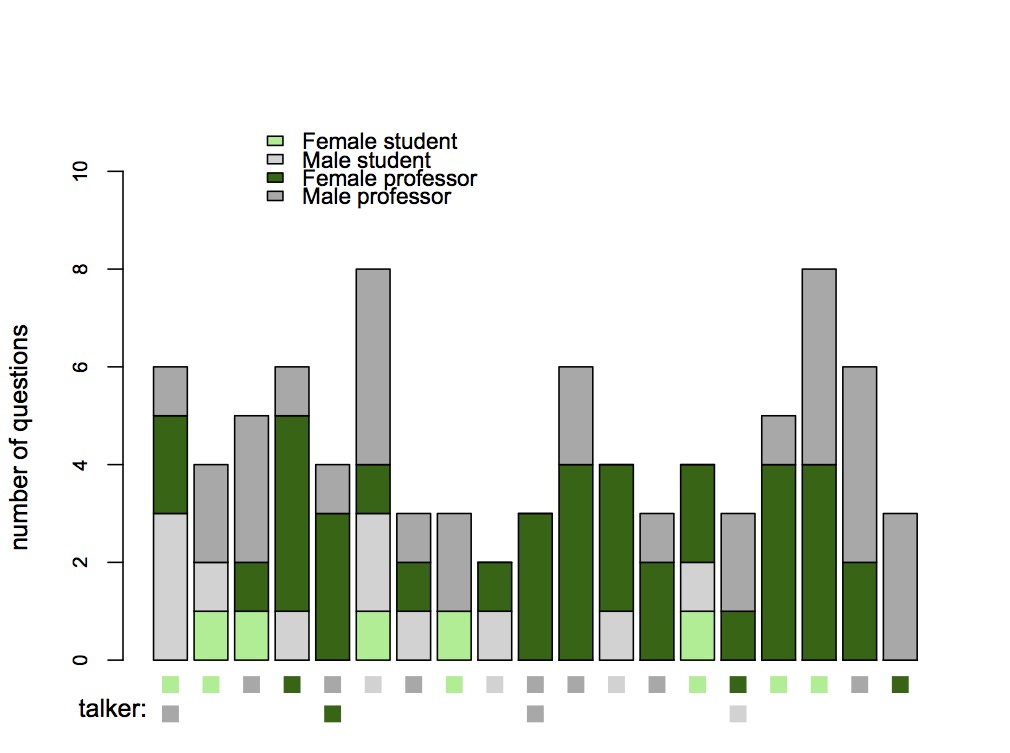 Order of questions was also recorded.  In all of the following graphs, numbers within a node indicate the probability that questioning started with a member of that category.  Probabilities of all arrows (transitions) out of a single unit sum to 1, and are based on counts of bigrams over all question periods that begin with that category.  First of all, the transitional probabilities between male and female question askers is basically at chance this year:

This year, there were rather few questions from students, and this is reflected in the transitional probabilities observed between students and professors:

Here is a graph of the ‘flow’ of questioning between all four categories: 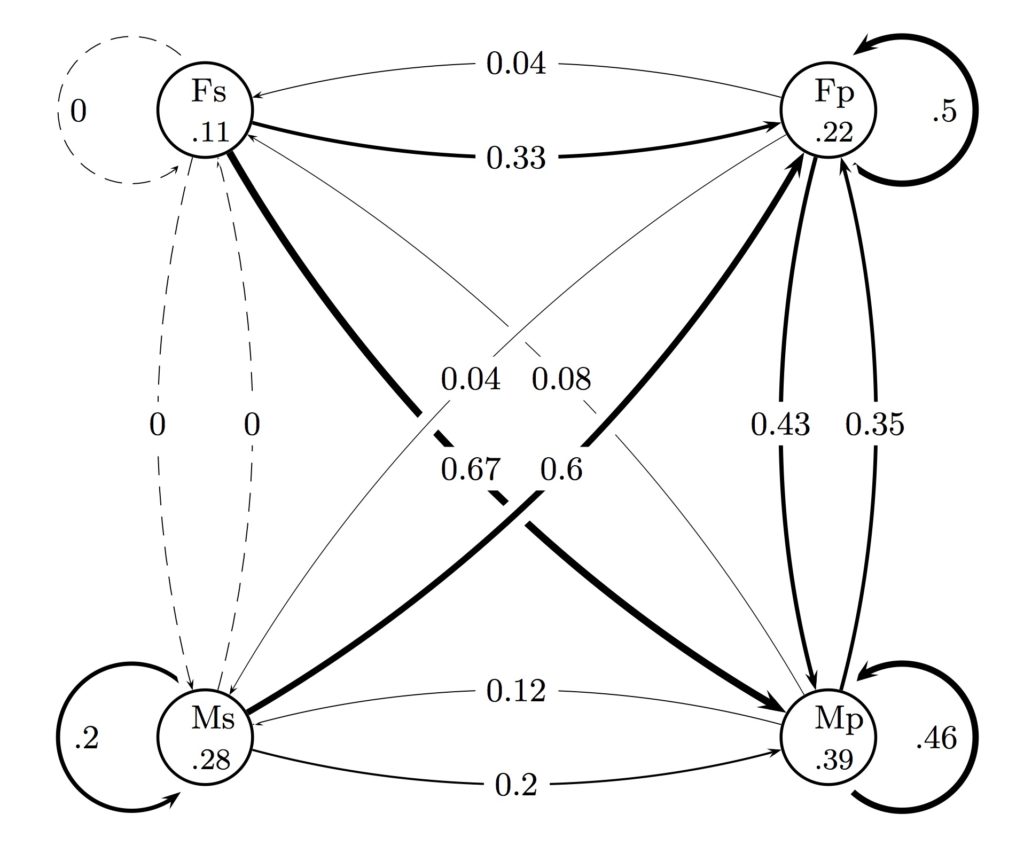 And finally, the same graph, but including questions from both this year and last year (205 questions total). 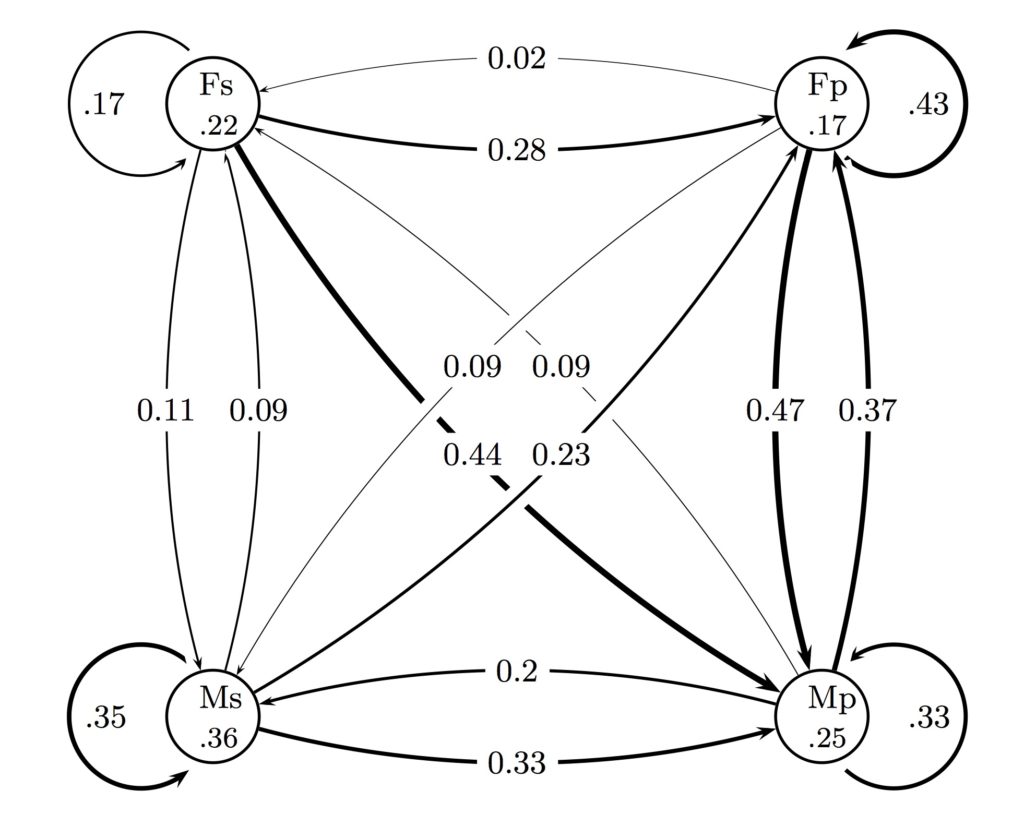 The raw data on which this year’s graphs are based, as well as data from other conferences, are available at the google spreadsheet linked below:

I’d like to encourage anyone who is collecting data of this type, or who wants to, to also contribute to the spreadsheet.  You can request editing access from within the sheet.  I’m hoping that having (relatively) standardized data from many different conferences will start to make it easier to compare different conferences, different conference setups, and maybe different fields/subfields.  Eventually it would be great to start understanding what kinds of conference configurations encourage more question asking from women, minorities, and students.