Based on a diverse and complementary set of theoretical and empirical findings, we describe an approach to phonology in which sound patterns are shaped by the trade-off between biases supporting message transmission accuracy and resource cost. We refer to this approach as Message-Oriented Phonology. The evidence suggests that these biases influence the form of messages, defined with reference to a language’s morphemes, words or higher levels of meaning, rather than influencing phonological categories directly. Integrating concepts from information theory and Bayesian inference with the existing body of phonological research, we propose a testable model of phonology that makes quantitative predictions. Moreover, we show that approaching language as a system of message transfer provides greater explanatory coverage of a diverse range of sound patterns.

The Department of Linguistics at Georgetown University invites applications for a position as Assistant Professor (tenure-track) with a specialization in Phonology.

We seek candidates who have a record of excellence in research and teaching. The successful candidate will be able to teach introductory courses in general linguistics, phonology and morphology, as well as advanced courses in their area of specialization.  We seek applicants with research interests in morphophonology, and in formal and computational models.  Applicants with research interests in language acquisition or language documentation are also encouraged to apply.

The appointment will start on August 1, 2017. Applicants must have completed all requirements for the Ph.D. degree by the time of the appointment.

Georgetown University is an Equal Opportunity, Affirmative Action employer fully dedicated to achieving a diverse faculty and staff.  All qualified candidates are encouraged to apply and will receive consideration for employment without regard to race, sex, sexual orientation, age, religion, national origin, marital status, veteran status, disability or other categories protected by law.

Applications should be received by November 30 for full consideration. Dossiers should include a letter of application, curriculum vitae, one to three representative publications, and names (with contact information) of three references.

Complete application materials must be submitted via email to: Mr. Conor Sinclair, conor.sinclair@georgetown.edu. Please send application materials as PDF files in a zipped folder with the applicant’s name.  The words Phonology Search and the applicant’s name should appear in the subject line.  Applications should be addressed to: Phonology Search Committee, Department of Linguistics, Georgetown University, 1437 37th Street NW, Box 571051, Washington, DC 20057-1051, USA. Inquiries about the search can be sent to Prof. Elizabeth Zsiga. (elizabeth.zsiga@georgetown.edu). 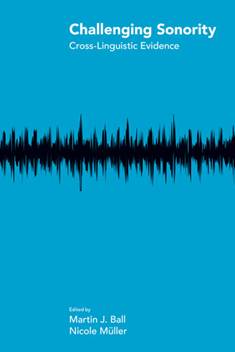 Edited by Martin J. Ball and Nicole Müller, both at Linköping University

Quote the code Sonority and receive 25% off when ordering from the book page:

This petition has been around for about 5 years now, but it’s been making the rounds on social media lately. Some recent discussion of this issue and related ones in phonology can be found in these posts to Phonolist.

“If you are an academic in favor of a more equitable representation of women at scholarly conferences across the world, join us in signing this Commitment:

Across the disciplines, disproportionately more men than women participate in scholarly conferences – as keynote or plenary speakers, as symposiasts, or as panelists. This, we believe, is the outcome of widespread and generally unintended bias. It is unfair, it hinders advancement in scholarship, and it is especially discouraging to junior scholars. Overcoming such bias involves not just awareness but positive action.

We therefore undertake to make our participation in conferences – whether as an organizer, sponsor, or invited speaker – conditional on the invitation of women and men speakers in a fair and balanced manner.”

What is sent to spell-out is phases, not phasal complements
Zeljko Boskovic
Direct link: http://ling.auf.net/lingbuzz/003150
October 2016
An appealing property of the phase theory is that it is relevant to many phenomena, i.e. many domain-based mechanisms are stated in terms of phases. However, although phasal complements have no theoretical status in the phase theory (only phases do), they are taken to define spell-out units. This paper argues for an approach where phases define spell-out domains, which means that what is sent to spell-out is the phase itself. Several arguments to this effect are presented regarding syntax-phonology interaction (in particular, encliticization in Bulgarian and Arabic, stress assignment in German and English, raddoppiamento fonosintattico in Abruzzese, and tone sandhi in Taiwanese), as well as more theoretical issues such as labeling. The assumption, however, has significant consequences for successive-cyclic movement. If phases are sent to spell-out and what is sent to spell-out is inaccessible to the syntax, successive-cyclic movement cannot target phases. Under the account argued for here, successive-cyclic movement therefore does not proceed via phases (i.e. phasal edges). As a result, the account also eliminates the PIC.

Exceptionality in vowel harmony
Daniel Szeredi
Direct link: http://ling.auf.net/lingbuzz/003148
September 2016
Vowel harmony has been of great interest in phonological research (eg. Clements and Sezer 1982, Kaun 2004, Nevins 2004, Hayes et al. 2009). It has been widely accepted that vowel harmony is a phonetically natural phenomenon (Fowler 1983, Kaun 2004, Linebaugh 2007), which means that it is a common pattern because it provides advantages to the speaker in articulation and to the listener in perception.

Exceptional patterns proved to be a challenge to the phonetically grounded analysis (Benus and Gafos 2007, Hayes et al. 2009) as they, by their nature, introduce phonetically disadvantageous sequences to the surface form, that consist of harmonically different vowels. Such forms are found, for example in the Finnish stem tuoli`chair’ or in the Hungarian suffixed form hi:d-hoz `to the bridge’, both word forms containing a mix of front and back vowels. There has recently been evidence shown that there might be a phonetic level explanation for some exceptional patterns: Benus and Gafos 2007 have shown the possibility that some vowels which participate in irregular stems (like the vowel [i] in the Hungarian stem hi:d `bridge’ above) differ in some small phonetic detail from vowels in regular stems. The main question has not been raised, though: does this phonetic detail matter for speakers? Would they use these minor differences when they have to categorize a new word as regular or irregular?

A different recent trend in explaining morphophonological exceptionality by looking at the phonotactic regularities characteristic of classes of stems based on their morphological behavior (Becker et al. 2011, Linzen et al. 2013, Gouskova et al. 2015). Studies have shown that speakers are aware of these regularities, and use them as cues when they have to decide what class a novel stem belongs to. These sublexical phonotactic regularities have already been shown to be present in some exceptional patterns vowel harmony, but many questions remain open. One such question is how exactly learning the static generalization can be linked to learning the allomorph selection facet of vowel harmony? Also, how much does the effect of consonants on vowel harmony matter, when compared to the effect of vowel-to-vowel correspondences?

This dissertation aims to test these two ideas — that speakers use phonetic cues and/or that they use sublexical phonotactic regularities in categorizing stems as regular or irregular — and attempt to answer the more detailed questions, like the effect of consonantal patterns on exceptional patterns or the link between allomorph selection and static phonotactic generalizations as well. The phonetic hypothesis is tested on the Hungarian antiharmonicity pattern (stems with front vowels consistently selecting back suffixes, like in the example hi:d-hoz `to the bridge’ above), and the results indicate that while there may be some small phonetic differences between vowels in regular and irregular stems, speakers do not use these, or even enhanced differences when they have to categorize stems.

The sublexical hypothesis is tested and confirmed by looking at the pattern of mixed stems in Finnish. In Finnish, stems that contain both back and certain front vowels are frequent and perfectly grammatical, like in the example tuoli `chair’ above, while the mixing of back and some other front vowels is very rare and mostly confined to loanwords like amatøøri `amateur’. It will be seen that speakers do use sublexical phonotactic regularities to decide on the acceptability of novel stems, but certain patterns that are phonetically or phonologically more natural (vowel-to-vowel correspondences) seem to matter much more than other effects (like consonantal effects).

Finally, a computational account will be given on how exceptionality might be learned by speakers by using maximum entropy grammars available in the literature to simulate the acquisition of the Finnish mixed stem and disharmonicity pattern. It will be shown that in order to clearly model the overall behavior on the exact pattern, the learner has to have access not only to the lexicon, but also to the allomorph selection patterns in the language.

The role of Question-Answer Congruence (QAC) in child language and adult sentence processing [Dissertation]
Direct link: http://ling.auf.net/lingbuzz/003142
Ayaka Sugawara
September 2016
This dissertation investigates experimentally the role of Question-Answer Congruence (QAC, von Stechow 1990, Rooth 1985, 1992) in child language acquisition and adult sentence processing. Specifically, I present two case studies: sentences with “only” and sentences with the Rise-Fall-Rise contour (RFR, Jackendoff 1972). Case study 1 investigates a long-standing puzzle concerning the acquisition of “only.” Since Crain et al.(1994), many studies report children display difficulties understanding sentences with pre-subject “only” while having no difficulty with pre-verbal “only.” The current study manipulates the levels of QAC to study the puzzle. The results show that QAC plays a significant role in the asymmetry between Subject-only vs. VP-only, and more generally, both children and adults are sensitive to QAC, with congruence facilitating processing, and incongruence interfering with processing. We conclude that the cost of the accommodation of a sub-question to obey QAC is different for Subject-only and VP-only. I propose that the way information is packaged makes it easier to accommodate a set of questions asking about the object of the sentence, which makes it easier to process VP-only. We also showed that the extent to which QAC influences comprehension is different for children and adults. For children, QAC has a stronger influence than the syntactic condition on only. For adults, the syntactic condition is not violated. We suggest that the status of the syntactic condition regarding only is a factor that distinguishes children from adults in the processing of only. Case study 2 investigates whether children can construe the inverse scope interpretation, which children are reported to disfavor (Musolino 1998), with the RFR prosody, which is standardly taken to require inverse scope. The results show that both children and adults are sensitive to RFR and able to compute the implicature associated with RFR to disambiguate the inverse scope interpretation. As in the “only” study, QAC levels varied in the RFR experiment. However, the results revealed no effect of question type. This leaves an important open question: why QAC seems more active in children in determining the associate of only than in the determination of quantifier scope when the prosody makes the scope clear.