From Stephanie Shih
Here is the gender report from the recent meeting of California phonologists in SoCal (SCAMP), run by Eric Bakovic at UCSD, 8-9 April 2016. I’m posting it here in order to foster continuing discussion on the representation of women in phonological discussion: see original post by Joe Pater, with a great comments section, here: https://blogs.umass.edu/phonolist/2016/01/05/the-representation-of-women-in-phonological-discussion/ 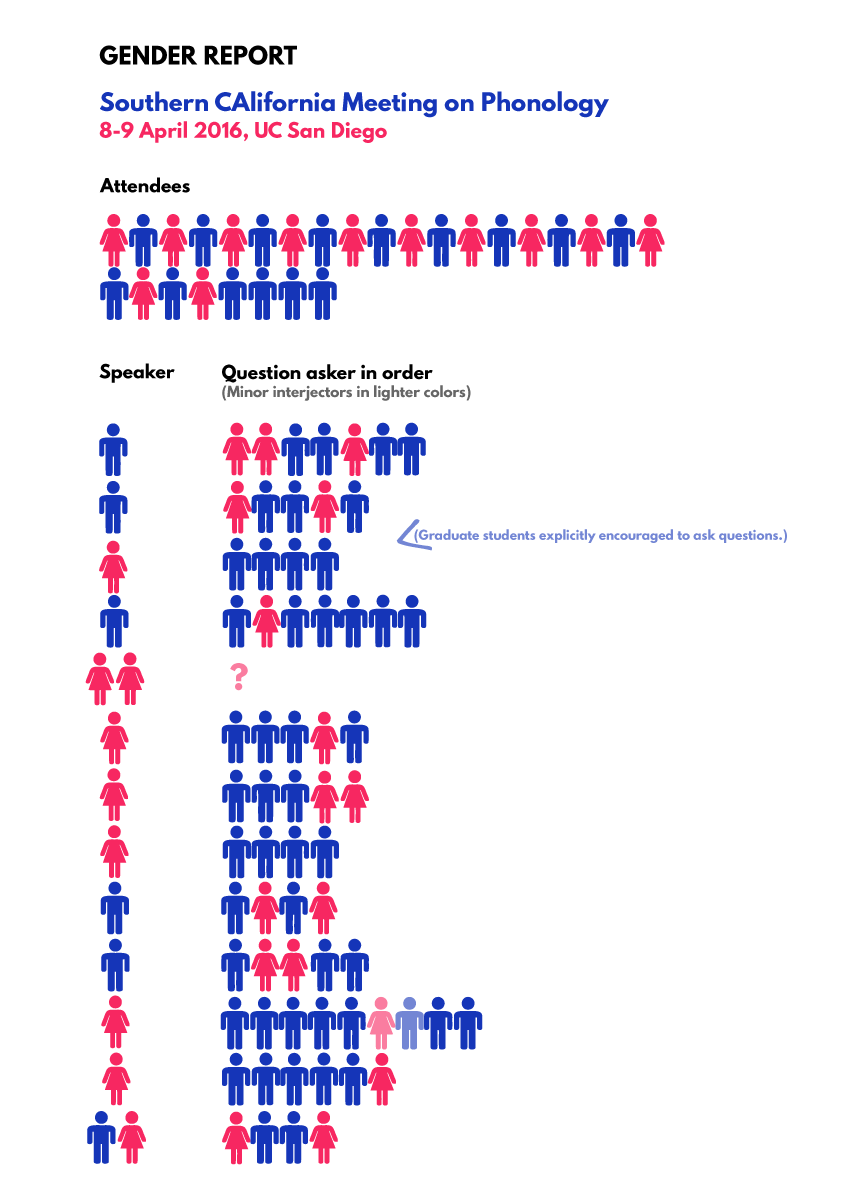 The conference was a regional one, with a friendly crowd and relatively informal atmosphere, and it was fairly gender balanced when I sampled the attendees towards the end of Day 1. (The missing data point is my own talk, for which I forgot to take down Q&A notes.)

There was at least one interesting observation to note. We started out with a pretty decent gender balance in the Q&A’s, with female question askers going first in both of the first two talks. Then, before the third talk, there was an announcement that explicitly asked graduate students to ask questions. I think many of the faculty took this to mean that we should allow graduate students to ask the first questions before jumping in. While this did definitely increase graduate student participation, which is a good thing, it has an interesting unintended consequence: the gender of the question askers started to skew towards male. In fact, throughout the entire conference, not a single female graduate student asked a question.

I suspect this effect might be due in part to reasons discussed before, in Joe’s post and comments, which is that women–especially young female academics–want to make certain that they have a really good question before asking, which takes longer and so they are less comfortable going first. At the beginning of the second day of talks, I specifically approached a dissertation-stage female graduate student to encourage her to ask questions, and she confirmed this anxiety.

Suggestions for how one might encourage more gender balance in graduate student questions would be greatly appreciated. I tried to take the direct approach in asking a specific student to participate, thinking that personal encouragement would boost confidence in the student, but I worry that in fact my intervention hurt rather than helped the situation (e.g., promoted more anxiety). I think it may also be good for students to see other female participants asking questions, but most of the female faculty (myself included) held back to allow graduate students to ask questions–seems like it’s a delicate balance to find.

[One final observation, from Eric Bakovic upon seeing this data is that “women speakers were overwhelmingly questioned by males, while questions for male speakers appear more balanced.”]

5 thoughts on “The representation of women in phonological discussion: Data from SCAMP 2016”