I had been intending to write up some thoughts on Blackstar, Bowie’s new album that was just released on his 69th birthday Friday, and on what has been a Bowie year for me over the last twelve months or so, when I got the news of his death. I don’t really want to write about Blackstar, though I am listening to it again right now (I think it’s great, though not as great or revolutionary as some writers have said). But I do want to write a letter of thanks to David Bowie for everything he gave us. He’s been a particularly huge influence on me this year, and at the risk of seeming self-focused, I’ll structure this tribute around that (insomuch as this is going to have much structure – there’s quite a bit of rambling and digression ahead).

My Bowie year started Christmas 2014. I happened across Chris O’Leary’s phenomenal blog, Pushing Ahead of the Dame: David Bowie, song by song. Getting the context for the music in such detail, especially about Bowie’s songwriting process, the musicians involved, its recording made me re-listen to it all with new ears. By “all”, I mean the albums up to and including Scary Monsters – nothing later than that has ever made much of an impression on me, until the last two. Maybe that’s because these were the albums I listened to as a teenager – Scary Monsters was one of the first CDs I ever heard (thanks Dad!). I got into Bowie thanks to my buddy Marc Lafrenière. He’s second from right with a Bowie-esque haircut, wearing a Scary Monsters t-shirt. 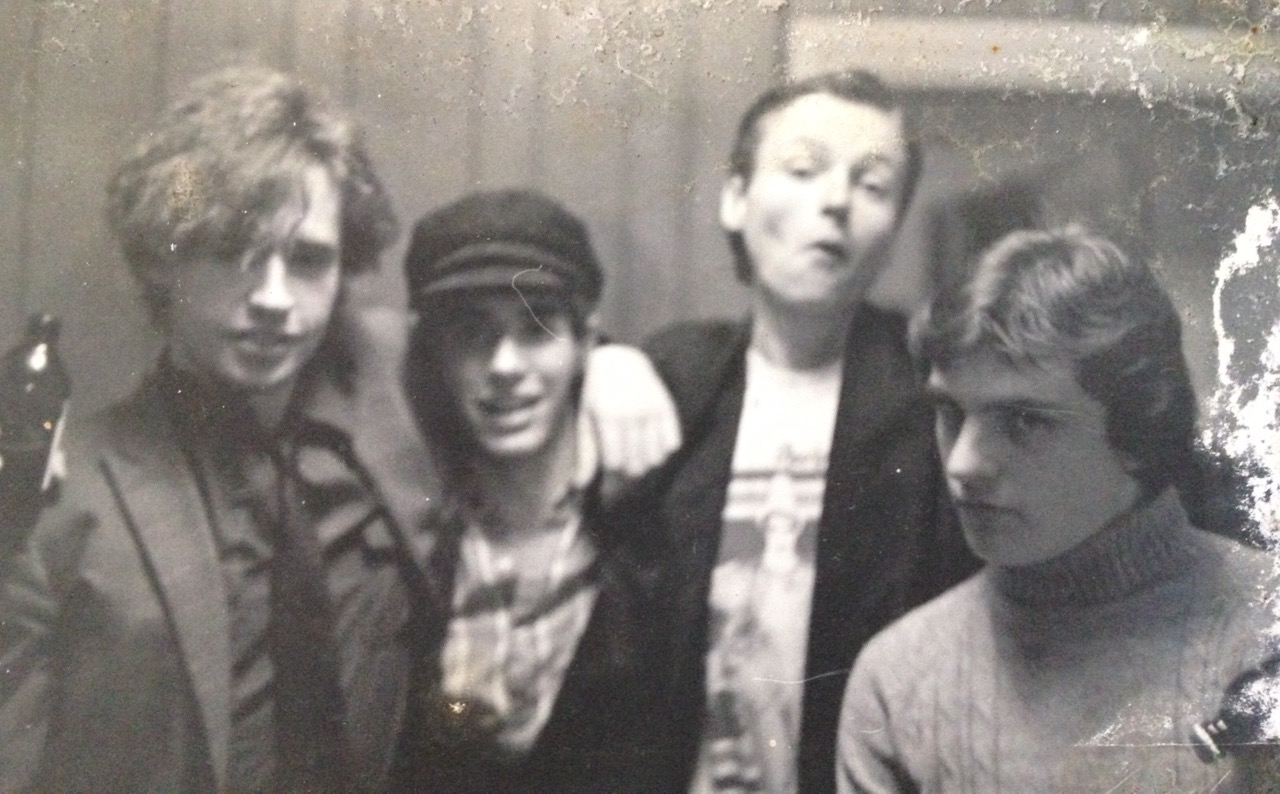 Along with our partner in crime Johnny Kauf on the right, it also has me and Dave McQuaide (far left) doing our best to be Marc’s Iggy and Lou, like in this famous and fantastic photo:

A couple points on the Lou and Iggy collaborations while we’re here. Bowie was hugely influenced by both of them – Ziggy was in some ways Iggy, and David was covering VU songs as he made the transition from spacy folk hippy to avant guard rocker. He then paid them back by helping them make some great music, and make some money. David played sideman to Iggy on a tour, and there is a phenomenal clip of them on the Dinah Shore show available on YouTube: both the performances and interview are must-sees. On Lou and David, I have to mention this making-of Transformer film I watched on Netflix, in which Lou rhapsodizes about the genius of Bowie’s backing vocals on Satellite of Love, saying no one else in the world could have done them. I don’t hear that song the same anymore – all I can hear are those truly incredible multi-tracked backing vocals. Another Lou-Iggy-David tidbit – in a French documentary we got the chance to see this summer, a very-1973 Lou says something like “Yeah David, he’s fun. Pretty quiet, but when he drinks, he thinks he’s Iggy”.

The next event in my year of Bowie was that “David Bowie Is” was in Paris last year, and we went as a family. Hopefully that exposition will now tour in perpetuity, and you’ll all get a chance to see it. Thanks to that, and subsequent events, our five-year-old thinks David Bowie is cool, which is pretty great. I snapped the photo below, which is Bowie’s Berlin-era painting of Iggy, with the synth that Eno gave him accidentally reflected beneath his eye. In the interview in the movie I just mentioned, Bowie said that he felt that he never had any talent for anything, except for perhaps painting, that he had to work very hard at music. I found that incredibly inspiring. 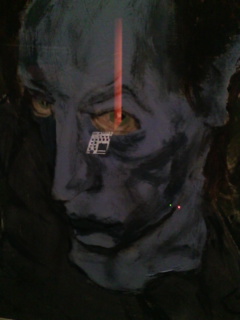 One thing that I’ve gotten out of the all the Bowie information from “David Bowie Is” and O’Leary’s blog is an appreciation for how his music in the Berlin era (Low-Heroes-Lodger) was such a conscious and interesting blend of American soul-funk and European electronic music. This is reflected in the make-up of the band: Americans Carlos Alomar, Dennis Davis, and George Murray, and Europeans Brian Eno and Robert Fripp . Check out this concert  video that my friend Lisa Samuda shared with me of Heroes-era Bowie. I tend not to like busy drumming, but I can listen to Look Back in Anger from Lodger over and over again just for the drumming. I also hadn’t realized how big of a role his collaborators played – he would apparently often just give them a very rough sketch of songs, and they would flesh them out on their own. The fact that Tony Visconti, Mick Ronson, Carlos Alomar, and the others did such a fantastic job on arrangements is a large part of the reason that his pre-1975 rock and post-1975 post-rock is so great (speaking of post-rock, a quick and too-reductive way of saying what his new album sounds like is Bowie singing with Tortoise, with some fancy contemporary vocal effects thrown in). But the singing on those records is to my mind what really makes them timeless. He has this inimitable way of changing styles and timbres in a seamless way within a song that he uses to great effect in Low through Scary Monsters especially. (Postscript: I just noticed the Apple Music Bowie Berlin collection says he was “exploring” new wave in this era. Inventing would be a better word).

Seeing the Bowie documentary at the  Art Rock festival at the beginning of last summer was a revelation to me on a number of levels. They had great interview with him, from about 1980 or a little later, in which he seemed confident and happy, and was reflective and funny. This contrasted with the image of him that was painted from the 1970s. He was a natural introvert, and the sudden Ziggy fame took its toll. There was footage of him post-concert in the Ziggy era, looking nervous and wanting to leave. It’s easy to imagine that the cocaine problem he developed was due to his using that drug to ease the interactions he needed to engage in. By the time of Young Americans he was a mess (that tour footage is frightening, and not very good – the David Live album from that time is also pretty painful). Besides his comment about having to work hard at his music, another thing that really stuck with me from that film was something he said about believing that our future is ours to invent.

Right after seeing that documentary, I decided that I would play at the Fête de la Musique, the French national holiday on June 21st. All year I had tried from time to time to find collaborators so that I could play in it, and since I hadn’t gotten anything together, I had given up. But that documentary got me fired up, and I decided I would do a solo show. All the Bowie stuff made me also decide to invent a persona and genre, so Vernon Valiquette and Glam-a-Billy were born.   Through a great stroke of luck I got to play in one of Nantes’ coolest bars, and Marie got into the act too, with poster design, roadie-ing, and dancing. I played a bunch of covers, mostly ones I knew from learning to sing and play guitar in my teens, including Ziggy Stardust. Listening to it now, I don’t think it’s that great – it’s really hard to do a Bowie song justice – but I was glad to have made it through it. That day was a dream come true, and it’s thanks to David that I had the courage and inspiration to pursue that dream. 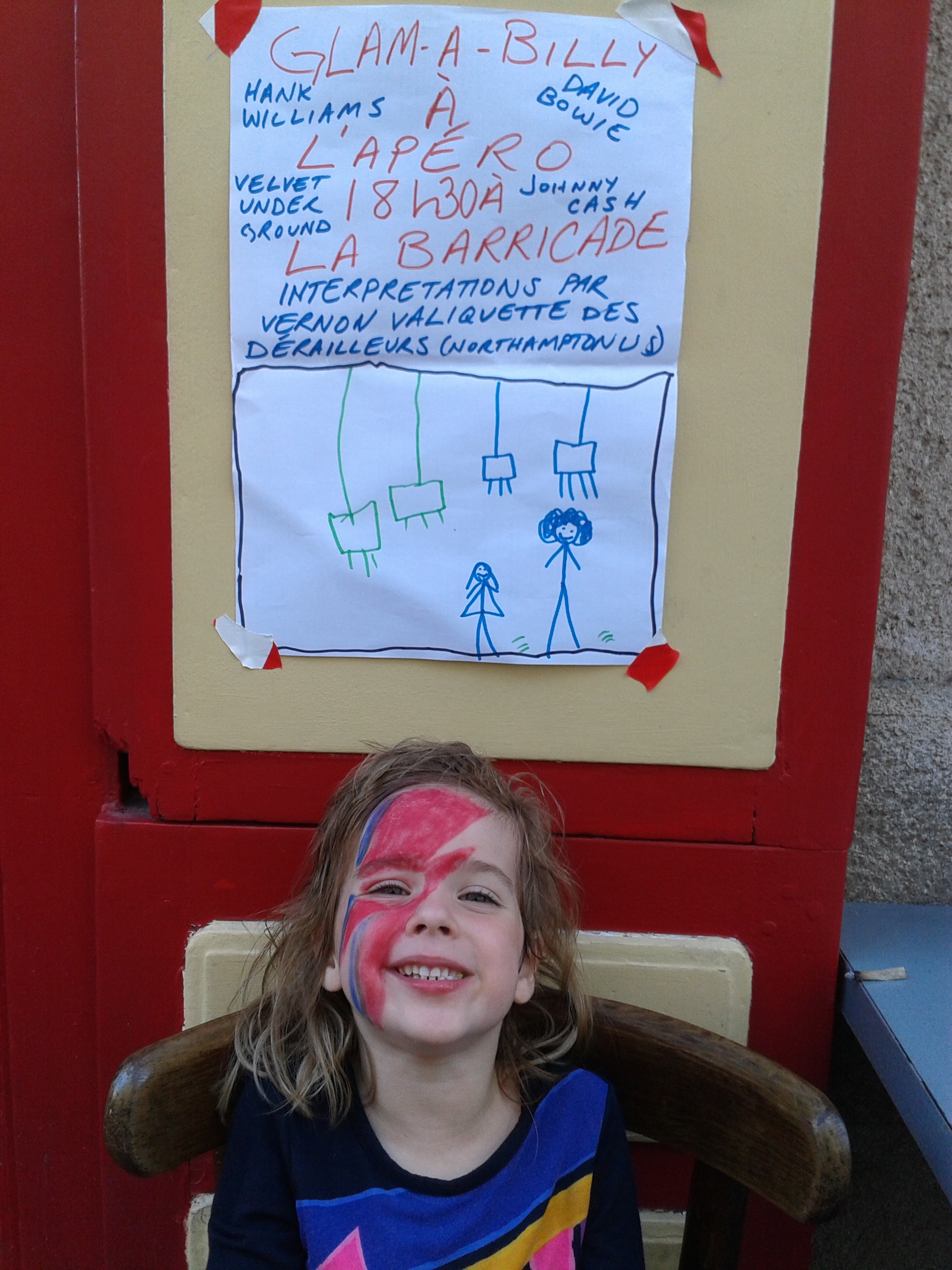 I went on to (re-)learn another Bowie song that I’ve played in a couple subsequent Vernon Valiquette shows, Watch that Man. We had played this song in our high school band, the Slinks. I knew the chord changes were complicated, but I hadn’t quite appreciated how hard the vocals were. This is what I said in Facebook at the time: “Turns out that Watch that Man is really, really hard, especially to sing, even an octave lower than Bowie. It’s got two key changes, and the vocals come in with the instruments on the changes. Man, did we ever torture our singer!” I told “our singer”, Gord Downie, that I had been playing it again, and he told me that he had covered it in his current band The Tragically Hip in a tour when they were learning a new cover every day  and playing it in the encore (unlike me, those guys are real musicians).  Humbling. Anyway, here’s my version.

I wasn’t surprised to get the news today of his death. There had been rumors of his ill health, and his recent productivity, including his participation in the “David Is” exposition, had the feeling of someone wanting to leave the right final mark on his heritage. And he certainly managed to do that, though his impact had already been enormous. As for me, I’m sure that my songwriting tricks mostly come from David Bowie (playing an F chord in a song in A, for instance). He’s also a huge inspiration in the importance of collaboration and how to do it successfully. But the biggest mark he’s made in my life is by making music that I will never get tired of listening to. Thank you David.

2 replies on “Thank you David”

Joe, this is very surreal sense of your journey, I am so glad you share these details. This make more sense of some of the experiments and richness of Highschool that was a hybrid environment. Thanks do much. Hello to your parents PLS. David