The most talked about new electric vehicle is the Tesla Model S, designed by Franz von Holzhausen and Tesla Motors. Recently introduced to the US, this vehicle has already made its mark in the car industry. It’s a four door luxury sports sedan and features an 85 kilo-watt battery with a 265 mile range, the longest available range currently available in the market, and goes 89 miles per gallon. The Tesla is an all electric vehicle, equipped with 416 horsepower and a rear-mounted electric motor. Being a sporty electric car, it should go fast. But compared to other sports cars in its market, such as the hybrid BMW 5 series and the hybrid Mercedes E-Class, it’s much slower. But compared to other full electric cars, it is pretty fast; it has a top-speed of 125 miles per hour and goes from 0-60 in 5.6 seconds (the Toyota Prius is twice as slow, 90 miles per hours and 0-60 in 10.2 seconds).

On the outside, the Model S resembles a mix of a Jaguar and an Aston Martin, with daring exterior curves. The car comes with an all-glass panoramic sunroof and door handles that retract into the door of the car to reduce aerodynamic drag. Inside, the car features eight-way power-adjustable front seats, touch-sensitive door handles and a 17-inch touch-screen that controls the audio and navigation systems as well as climate and other controls. It was recently awarded Car of The Year, by Automobile Magazine. 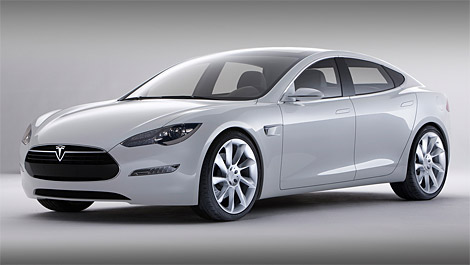 (above is an image of the Tesla Model S)