I remember being a kid and watching old highlights of Larry Bird wondering to myself how the heck he was such a consistent shooter.  The man exhibited an overwhelming amount of confidence out on the basketball court; it was as if every time the ball left his fingertips he knew it was going in.  I listened to Larry talk about his shot and remember hearing him say that when he practiced shooting free throws he would line his right foot up with his right elbow and his right eye.  By setting up his body in such a manner Bird was able to maintain consistency at his release point.

When a shooter releases a basketball the distance it travels occurs as a direct product of the amount of force that he/she applied.  The further away from the basket the shooter is, the more force they will be required to put on a shot if they want to get it in the hoop.  The spin a shooter puts on the ball occurs as a result of their release.  A good jump shot typically has a good amount of backspin so that if the ball were to ricochet off the backboard it would come off at a downward angle into the hoop.  The term used by most basketball connoisseurs to describe the trajectory at which the basketball flies through the air is “arch”.  The more arch a shot has, the more likely it is to come down in the hoop. This is because when a ball comes straight down it makes the rim bigger.  Think about it, dropping a ball down into a hoop is a lot easier than trying to shoot it in at an angle because you have more of the basket to work with.   In order to figure out the correct arch to use, a shooter must take into consideration their height, how far away from the basket they are, the weight of the basketball, and how tall the hoop is.  Their last step would be to figure out the correct combination of what angle they would like the basketball to fly through the air at when they shoot it and what speed they should shoot the ball at. 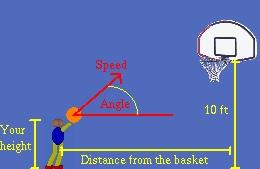 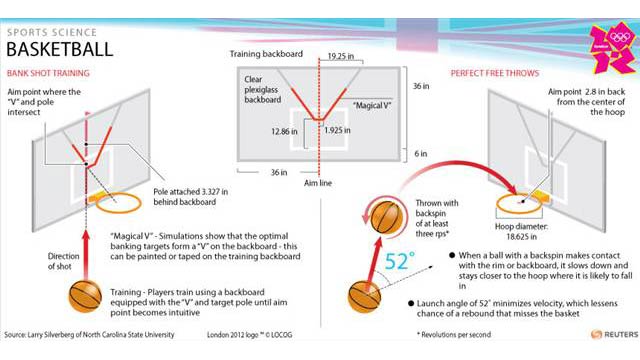