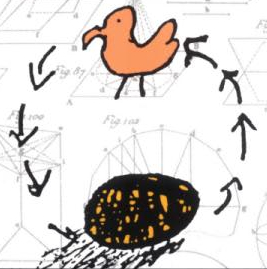 g work done on chickens, for example, by Arthur Hamilton (“Milt”) Smith in the 1970s.  Milt Smith was a gravity specialist at the University of California at Davis who wanted to find out what would happen to humans if they lived in greater-than-normal g-forces.   Naturally, he experimented on animals, and he decided that the animal that most closely resembled man for this specific purpose was the chicken.  Chickens, after all, had a posture similar to man’s: they walked upright on two legs, they had two non-load-bearing limbs (the wings), and so on.  Anyway, Milt Smith and his assistants took a flock of chickens – hundreds of them, in fact – and put them into the two eighteen-foot-long centrifuges in the university’s Chronic Acceleration Research Laboratory, as the place was called.

They spun those chickens up to two-and-a-half gs and let them stay there for a good while.   In fact, they left them spinning like that day and night, for three to six months or more at a time.  The hens went around and around, they clucked and they cackled and they laid their eggs, and as far as those chickens were concerned that was what ordinary life was like: a steady pull of two-and-a-half gs.  Some of those chickens spent the larger portion of their lifetimes in that goddamn accelerator.

Well, it was easy to predict what would happen.  Their bones would get stronger and their muscles would get bigger – because they had all that extra gravity to work against.  A total of twenty-three generations of hens was spun around like this and the same thing happened every time. When the accelerator was turned off, out walked … great Mambo chicken!

These chronically accelerated fowl were paragons of brute strength and endurance.  They’d lost excess body fat, their hearts were pumping out greater-than-normal volumes of blood, and their extensor muscles were bigger than ever.   In consequence of all this, the high-g chickens had developed a three-fold increase in their ability to do work, as measured by wingbeating exercises and treadmill tests.

I haven’t had a chance to track them down (and to be honest I’m afraid I’ll be disappointed), but supposedly these are the references:

Useful or interesting links. Seldom both.