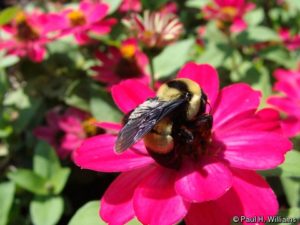 When we think of our favorite apple, we typically do not associate the image with a

school-aged child precariously perched among the uppermost branches, balancing a pot of pollen

in one hand, while holding a paintbrush in the other hand to paint each individual bud with

pollinating each individual flower one at a time, hoping that it bears fruit that can be sold at a

market.  As far-fetched an image this is, it’s the reality that is happening right now in China.

Goulson (2012) provides such an example in an article he published in early 2012.  In his article,

pesticide use, and the destruction of natural pollinator habitats, has led to the farmers, and their

children, being forced to hand pollinate the apple and peach trees that grow in that region.  He

goes on to describe what a market without bees could look like, describing the lack of berries,

apples, peas, beans, melons, and tomatoes all of which depend on pollinators such as bees to

thrive (Goulson, 2012).  Nearly 75 percent of crops that are grown globally for consumption by

Furthermore, the sheer demand by consumers for these crops has skyrocketed in the last half

that the steady increase of crop cultivation occurred from 1961 onward (Potts et al., 2010).

person increased nearly 30 percent, and the doubling of the worldwide human population from

pollination services, such as the bumble bee, as there are not enough pollinators to go around

(Goulson 2012; US Census Bureau).  These trends coupled with the decline of pollinators due to

the combination of several factors, including pathogens, pesticides, and habitat loss can have

crops, a world without true pollinators would be very different from today. There would be

increased burdens on the agricultural industry as they would have to pollinate, there would be a

lack of food potentially due to human pollinating inefficiencies, and as a direct result food may

become more expensive. While the planet may never become completely devoid of all

pollinators, the scientific community knows that some wild pollinator species are declining

(Pollinators Home Page). One group of species that is exhibiting signs of decline are North

Through their unique ecological roles and behaviors, bumble bees are important as

natural pollinators. During the spring and summer months it is common to see bumble bees

foraging during the early morning hours and late in the evening. This is due to their preference

for cooler temperatures, they will typically avoid high activity in hot weather. This contrasts

most other pollinators and as a result, bumble bees help to expand the effective pollinating

structures that make them unique in their abilities to pollinate. They have some of the longest

tongues among insect pollinators, this allows them to obtain pollen more efficiently from key

agricultural crops such as tomatoes and berries. They are also large in size, and have a distinct

has also been shown that bumble bee populations act as hubs for pollination networks, and that

some wildflowers are exclusively pollinated by bumble bees only (Grixti, et al., 2009). These

In Europe, reductions in bumble bee populations have been exhibited over the past 60

years. Here in North America however, there have been little studies considering the declines of

bumble bee species. There are 46 species of bumble bees that live in North America (Bumble

bees of North America: An identification guide), of these species there are several that are in

decline. Goulson et al. (2008) claim that the Western Bumble has declined dramatically since the

early 1990’s. Once the most common species in the American west, they are now rare. Colla et

conservation (Colla et al., 2012). There may be several reasons why bumble bees are declining in

North America. Whatever the causes are it is reasonable to suggest that reduced populations of

bumble bees will have negative effects on agriculture, food accessibility, and North American

One contributing factor to the decline of bumble bees are pathogens. Just like how a virus

like the flu harms and effects the human body, diseases and viruses affect the health and ability

for bees to pollinate. In her TED talk: Why bees are disappearing? – bee scholar Marla Spivak

parasite. The parasite sucks the blood of bees and circulates viruses disrupting their immune

systems. Another parasite that is highly prevalent in bees in Nosema Bombi. Although

further research (Cameron et al., 2011), pathogens combined with other factors such as pesticides

are causing the decline of this species.

Another hypothesized causal effect for the decline of bumble bees, are pesticides –

solubility. They can be applied directly to the ground so that plants can take them up and hold

them in their tissues. They are also highly favorable because they are shown to be safe for most

vertebrates such as mammals and birds (What is a Neonicotinoid?). However, these pesticides

are now candidates for the decline of several insect taxa, including the bumble bee.

realistic levels of imidacloprid (a neonicotinoid). What they found was that control colonies on

average weighed more than colonies that were exposed to imidacloprid at small doses, and even

more than colonies that were exposed to higher doses. The control colonies were upwards of

35% heavier on average. This reduction in weight from the colonies exposed to imidicloprid

signifies less healthy bee colonies due to less mass and eggs. They also found that control

(13.7 vs 2.0 &amp; 1.4 on average). These results indicate that imidacloprid exposure reduces colony

that thiamethoxam (another neonicotinoid) reduced the number of live bees by 38% (Carrington,

those in North America, and infer that similar negative impacts may be shared.

Along with pesticides, one of the largest factors that has led to the decline of the North

American Bumble Bee is the loss of their natural habitats.  In the United States, a shift towards

monocultures, particularly of corn and soybean crops, has led to the destruction of naturally

the bumble bee, leading to nearly a 30 percent decline in the number of native bumble bee

All of these factors by themselves may pose problems to bumble bees, however in

combination they may also act synergistically with each other and have greater effects. Goulson,

Nicholls, Botias and Rotheray, 2015 state that interactions among multiple stressors have a

higher likelihood of being more harmful than one stressor by itself. For example, fungicides such

themselves, but in combination with some neonicotinoids can increase the pesticide’s toxicity

1,000-fold. There also may be synergistic effects between nutritional stresses due to habitat

raise. This increase in mortality may arise due to metabolic costs associated with fighting

pathogens. Infected bumble bees must increase food intake to fight the pathogen, which may

quickly due to their already limited resources (Goulson, Nicholls, Botias &amp; Rotheray, 2015). Due

to changes and losses of habitat, prevalence and transmittance of pathogens between bees, and

the high use of neonicotinoid pesticides, the synergistic effects between these variables are

Although pathogens, pesticides, and habitat loss each have different levels of effect on

North American bumble bees, the combination of all these factors most likely contribute to the

decline of these species. An appeal to the students and faculty at Umass Amherst for the

implementation of more bumble bee friendly habitats on campus, such as pollinator gardens, will

be helpful to negate the effects of pathogens, pesticides, and habitat losses in the area. While

Amherst is in a rather rural area of western Massachusetts, there is a high prevalence of

agricultural areas that may pose risks for bumble bees, and a high prevalence of dense forests in

which bumble bees do not prefer as prime habitat. There is currently a pollinator garden on the

According to Marc Carlton (2006), a pollinator garden is a garden that is planted mostly

with flowers that contribute nectar and pollen for a large diversity of pollinating insects (Carlton,

2006).  We propose creating pollinator gardens on the Umass campus focused on native insect

pollinators and bumble bees. To attract and adequately supply bumble bees with their nutrient

include native plants, which would ensure the evolutionary compatibility between the bumble

bees and the plants. The gardens should also be planted in a sunny area without the use of

pesticides, should have a large variety of plants to span the seasons, and should include logs and

requirements. They can reduce distances between colonies and food, and provide food that is

pesticide free. If reliance on pollinator gardens is achieved over sources where pesticides are

applied, this reduces the impact of pesticides on native colonies.

garden, and anyone can do so.  The United States Fish and Wildlife Service (USFWS) manages

the Wildlife &amp; Sport Fish Restoration Program, which aims to provide up to 75 percent in costs

Grant funding, such as the one mentioned from the USFWS, is not the only resource that is

made available to the general public with regards to the implementation of pollinator gardens.

Many agriculture and eco-friendly universities, such as Umass Amherst, have published easy to

throughout the year. Higgins (2013) provides a very detailed listing of species of plants which

provide an appropriate habitat for pollinators such as the bumble bee.  The availability of grant

funding, along with the ease in which one can identify pollinator friendly plant species are two

strong indicators of feasibility regarding the implementation of pollinator gardens at Umass.

As of February 10, 2017, the Rusty-patched bumble bee was declared an endangered

species (Species Profile for Rusty patched bumble bee). This is the first bumble bee in the

territory (Greshko, 2017). According to the Center for Biological Diversity – an organization

whose mission is to save and encourage the saving of all life on earth, the endangered species

species act: A wild success). However, there are still individuals that do not think it should be

a priority to save species like the Rusty-patched bumble bee. For example, Juliet Ford argues

in her piece “8 Reasons Why We Need to Stop Worrying About Endangered Species,” that

money on helping feed the poor and less privileged instead (Ford, 2014). While on the

surface this argument has some weight, once actually thought through logically it lacks key

concepts. For instance, all organisms provide biological services, so simply letting them

affect humans that rely on that ecosystem’s services. Bumble bees especially since we rely on

them heavily for agriculture and pollination.

of factors, such as pathogens, pesticides, habitat loss, and the combined effects of these

together. Bumble bees rely on pollen from sources that are available to them, which

sometimes are far away from their colonies or not highly prevalent. These sources also may

contain pollen that have been treated with pesticides. If more pollinator gardens were located

around the Umass Campus, this would help the local bumble bee populations by creating a

hub for healthy, accessible pollen. While this would not help solve the continent-wide decline

the way for other individuals and institutions down the road to do the same.