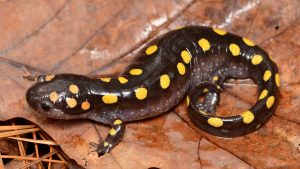 Salamanders are vertebrates that have evolved over the last 150-200 million years to be very ecologically diverse (Davic & Welsh, 2004, p. 405). There are over 400 species in 59 genera and 10 families spread around the world, 234 of these are found in North America (p. 405). Of the 234 species of salamander found in North America, 67 (29%) are listed as imperiled or critically imperiled (p. 405).Salamanders play a crucial role in forest ecosystems and make up a high percentage of forest biomass. In the Mark Twain National Forest in Missouri, it was estimated that across an area of 275580 ha (2755.8 km2), there were 1.88-2.65 billion salamanders that made up 1485.2–2093.5 metric tons (mt) of wet biomass (Semlitsch, O’Donnell, & Thompson, 2014, p. 1003). In the Hubbard Brook experimental forest of New Hampshire, it was estimated that five salamander species had a combined average density of 2950 salamanders/ha (0.29/m2) and a biomass of 0.00177 mt/ha wet weight, which was 2.6 times the combined wet-weight biomass of all birds in the watershed at the peak of breeding season and at the very least equal to that of small mammals (Davic and Welsh, 2004, p. 407). Salamanders are also an abundant source of energy and nutrients for birds, fish, reptiles, mammals, and decomposers (p. 421). Salamanders play the role of a voracious predator and keep arthropod populations in balance (Why Salamanders Matter, n.d.). They are considered “keystone predators”, meaning they prevent dominant prey from monopolizing limited resources, thus providing balance to the ecosystem. The role they play has a disproportionately large effect on the ecosystem relative to their abundance (p. 417). This role salamanders play as keystone predators is critical in the trophic processes at the leaf litter-soil interface in temperate forest ecosystems. And with soils globally being the third largest carbon pool, the key role salamanders play in maintaining this healthy ecosystem cannot be understated (Best & Welsh, 2014, p. 16). Salamanders are also exceptional indicators of environmental health as their skin is moist and permeable, meaning that they are vulnerable to toxins and droughts (United States Geological Survey, 2017). Salamanders are incredible vertebrates that play a crucial role in the forest ecosystems that make up Amherst. Apparent by their enormous densities and high species richness in North America, Salamanders play a significant role in maintaining healthy forests and have evolved over millions of years to do so (Best & Welsh, 2014, p. 15).

Given that salamanders play such a pivotal role forest ecosystems, the numerous threats that they face is alarming. It comes as no surprise that one of the underlying causes of threatened salamander populations is climate change. Physiological adaptations such as shifts in growth rates in ectothermic salamanders (ectothermic organisms depend on external sources to regulate their internal body temperature) have occured due to climate change. Over a 55 year period in the Appalachian Mountains of New York, five salamander species saw an 8% reduction in the average adult body size (Caruso, Sears, Adams & Lips, 2014, p. 1758). With increasing external temperatures there is a decrease in activity rates, leading to reduced foraging and thus reduced growth. Salamanders with decreased body size are then more susceptible to issues breeding (p. 1758). Salamanders depend on water bodies to breed, however, climate change will see a decrease in precipitation and an increase in droughts. Chandler, Rypel, Jiao, Haas and Gorman (2016), found that breeding conditions for salamanders would become unsuitable in the future due to a decrease in precipitation and an increase in drought (para. 1). From 1993 to 2014, wetland hydroperiods (a period of time during which a wetland is covered by water) in the southeastern US decreased by 36% in duration (Chandler, Rypel, Jiao, Haas & Gorman, 2016, para. 30). Factors such as this leads to unsuitable breeding conditions and a shift in the timing of salamander breeding (para. 18). During a drought in the Cascade Mountains of Oregon, salamander size was an average of 15.8% smaller than in the previous year without a drought (Kaylor, VerWey, Cortes, 2019, p. 58). There is also increased displacement due to severe weather events occurring more regularly as a result of climate change (Deitchler, Davenport & Lowe, 2015, p. 239). Climate change presents many challenges for salamander and it’s an ever increasing problem. However, we cannot stop climate change at a town level. In order to mitigate the effects of climate change on salamanders, an increase in amphibian road crossings and land protection is needed in order to drop salamander mortality and connect breeding areas.

With this severe habitat fragmentation occurring through habitat loss and road mortality, local populations become subject to loss of gene flow, inbreeding depression, and thus even expiration of the population. Populations of red-backed salamanders sampled from both fragmented and contiguous landscapes have shown the effects of habitat fragmentation, with the populations in the contiguous habitat showing far greater genetic diversity than those in fragmented habitat (Noël, Ouellet, Galois & Lapointe, 2006, p. 604). For red-backed salamanders, genetic diversity is highly correlated with fitness. This is especially true in regards to the salamanders having the ability to adapt to the changing environment (p. 604). Roads create barriers to breeding areas via high salamander mortality and unpassable structures while development results in severe habitat loss.

With the important role salamanders play in forest ecosystems, there would be catastrophic negative impacts that would occur with their removal. There would be a loss of balance and undoubtedly a negative domino effect throughout forest ecosystems. The forests of Amherst would become degraded and even more vulnerable to the impacts of climate change. The health of forest and wetland ecosystems also contribute billions of dollars to the economy by supporting industries such as fishing and timber, as well as recreation (USGS, 2017).

Our proposal is to mitigate the threats of climate change on salamanders by increasing the connectivity of salamander breeding areas through land protection and the building of more tunnels. These tunnels provide solace for the salamanders during the first warm spring rain, it serves as the main highway to reach the vernal pools. Conservation and protection of these salamanders is crucial when considering the benefits they apply for the Amherst ecosystem. While climate change will certainly impact not just salamanders, but for all life and Amherst has a huge reason for trying to put focus on the salamander crossing tunnels that have already been constructed.

The town of Amherst is already home to the first tunnel system designed to help salamanders reach the vernal pools that they breed in each spring. These first two tunnels were an experimental design funded by the British Fauna and Floral Preservation Society and the ACO Polymer in Germany. They were built in 1987 on Henry Street and sit 200ft apart from each other. They are currently maintained by the Hitchcock Center with the help of volunteers, who work to keep the tunnels clear from debris and perform general maintenance on them each year (Henry Street Salamander Tunnels, Hitchcock Center for the Environment, n.d). With the success of these tunnels, more have been built in other communities and studies have been done to prove the effectiveness of the already existing salamander tunnels in Amherst. (Hedrick, Linden, Cordero, Watt, O’Roark, Cox, & Sutherland, 2019). Jackson (1996, p. 3), reported that 75.9 percent of the animals that reached the entrance to the tunnels successfully passed through them. It was found that with an increase in ambient light to the tunnels through perhaps grating in the road, a higher percentage of salamanders would pass through the tunnels. With the already strong community in Amherst dedicated to helping the salamanders reach the areas they need to in order to breed and the building supplies that are already donated for the yearly maintenance, we have a strong foundation in place for improvement. Helldin and Petrovan (2019) found that at all road sites with salamander mortality mitigation structures in place there was a decrease in mortality. The number of salamanders saved per night varied between 25 and 200 individuals (p. 6). We as a community have the dedication, support, and materials necessary to renovate the already existing tunnels so they are up to the current standards.

Also, when looking at the 2017 recorded data, it is evident that salamander crossing success rate was more successful for the lit tunnels opposed to the dark tunnels, so we can determine that the salamanders are more likely to succeed in crossing under the road when using a lit tunnel. From the results, the “light at the end of the tunnel in 2017” hypothesis is because salamanders are attracted to artificial lighting since “glow sticks increased the average number of captures of spotted salamanders by more than three times, Jefferson salamanders by nearly four times” (Jeff Mulhollem. 2017). A team of researchers at Penn State found that “glow sticks — cheap, self-contained, short-term light-sources — attract the creatures to traps set in vernal pools where they come to reproduce in the spring.” (Jeff Mulhollem. 2017.) The use of artificial lighting combined with the tunnels for salamander crossing could equal maximum efficiency for salamander success rate. Expansion of the already existing tunnel blueprint could certainly be negotiated through the Hitchcock Center, and with the help of volunteer work plus the cost of materials for expansion could prove to be both feasible and effective when it comes to protecting salamander populations from the effects of climate change, salamander resting grounds could also be another control mechanism for protecting salamanders from the harsh elements.
Along with the addition of more tunnels, protecting land surrounding the crossing tunnels to ensure their success is a crucial part of our proposal. Policy in Massachusetts focuses on protecting breeding sites for salamanders, and while that’s important, upland habitat areas that are slightly higher in elevation and do not have water above ground also need to be protected (McGarigal, Compton & Gamble, 2008, p. 25). If breeding sites are protected but surrounding upland habitats are not, the breeding sites are susceptible to becoming isolated and thus less productive (p. 25). There is also a positive relationship between the amount of forest surrounding a breeding site and the presence of species such as the Spotted and Jefferson Salamanders, meaning protecting forest is crucial (Porej, Micacchion & Hetherington, 2004, p. 406). The purchase of Eastman Lot, owned by the Cowls, by the town of Amherst would go a long way towards conserving land important to salamanders. Protecting land surrounding the tunnel crossings would eliminate the risk of development and ensure that there is healthy upland forest allowing the salamander populations to flourish.

The problems that people could have with our proposal include the necessary money and support required to make it successful. The maintenance of the existing tunnels is funded, but asking for more money from donors or finding new potential donors to construct new tunnels is asking a lot. The original tunnels required substantial funding from both the British Fauna and Floral Preservation Society and the ACO Polymer in Germany (Henry Street Salamander Tunnels, Hitchcock Center for the Environment). With all of the current maintenance being done by volunteers, it’s going to be incredibly difficult to gather even more volunteers in order to construct new tunnels and then continue to provide yearly maintenance to the new and existing tunnels. Raising awareness will help bring in volunteers but with the majority of the construction and maintenance needing to be done over the winter getting people will be difficult. Not many people care enough about the salamander population to do manual labor during the harsh New England winter.

Salamanders play an irreplaceable role in forest ecosystems and their continued success in playing this role depends on us. With the important role that forests play in sustaining a healthy environment, Amherst must give direct attention to the issue of salamander protection. Development and connectivity poses numerous threats to salamander populations within the town of Amherst, Massachusetts. On top of this, climate change is an increasing threat to salamanders. With increased connectivity of upland areas to breeding areas through adding more amphibian road crossing tunnels, salamander mortality can be greatly reduced during migration. Protecting the land surrounding the crossing tunnels allows more insurance towards the continued success of these tunnels and eliminates the threat of development. Together, these methods will help stem the threat that climate change poses on salamanders and it puts them in the best position to succeed through adapting.