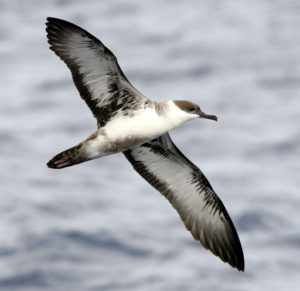 Masses of Yelkouan Shearwaters swarm the islands of the Mediterranean Sea in search of old lovers and new lovers during the start of the new breeding season in November. Known as wind chasers, these gray and white birds silently coast the surface of the sea until they hit land and finally begin their cackling breeding calls. Veterans of the breeding ritual pursue their mate of previous years while new birds start the quest for a lifelong partner. Once they find each other, Shearwater couples reacquaint themselves and continue the works of Mother Nature, laying one golden egg per mating pair. For the next couple of weeks both parents take turns incubating the egg and flying out to sea in search for food (Raine, n.d.). Once the babies hatch, this becomes an almost impossible task, leaving the Shearwaters exhausted from the care of their offspring. With fatigue weighing down their wings and their spirits, Shearwaters easily fall victim to ecological problems like the introduction of predators. Unfortunately, due to these problems, Yelkouan Shearwater populations are in steady decline and are now listed as vulnerable to extinction by the International Union for Conservation of Nature (BirdLife International, 2016).

Feral cats are particularly threatening to small island species like the Yelkouan Shearwater because of their aggressive predation habits. In particular, feral cats have a strong ability to adapt to a wide range of prey (Bonnaud et al., 2007). One study, for example, found that cat diets on a Mediterranean island consisted mainly of rats (80%), mice (39%), and the Yelkouan Shearwater (4.7%), but also incorporated a range of other prey types including reptiles and insects (Bonnaud et al., 2007, p 1076). This flexible diet makes it possible for feral cats to switch prey preferences as new prey types become available or unavailable. For example, when Yelkouan Shearwaters are present on the LeLevant Island during their November breeding season, feral cats prey heavily on their increasingly accessible populations (Bonnaud et al., 2012).  Once the Shearwaters leave the island after the breeding season has come to an end, feral cat will instead feed heavily on rats and other prey types that are readily available year round (Bonnaud et al., 2012). This allows feral cat populations to persist enough over the course of the year to decimate already vulnerable Shearwater populations when they return for the next breeding season.

Feral cats are also problematic in that they kill in surplus, hunting more than they can possibly consume (McGregor et al, 2015), while also spreading disease (Akucewich et al, 2002) and outcompeting native species for valuable resources (Hernandez-Santin et al., 2016). Studies show that cats are directly responsible for 14% of global vertebrate extinctions and contribute to over 8% of the world’s ‘critically endangered’ list (Medina et al., 2011, p. 3503). In combination with other human-related factors, including habitat loss and global warming, cats are implicated in a significant percentage of threat to native island biodiversity in general, impacting at least 175 vertebrate species on 120 different islands (Medina et al., 2011, p. 3505).

Feral cats are primarily able to wreak so much havoc due to reproduction cycles and behaviors that are characteristic to their populations. With a short gestation length of 63 days, feral cats are able to reproduce at an extremely rapid rate, allowing populations to skyrocket in a very short amount of time (O’Meara, 2009). Without human intervention, problematic feral cat populations will continue to run rampant across islands while decimating local wildlife communities.  Consequently, it is exceedingly crucial that we take steps to alleviate this feral cat problem as quickly as possible to prevent the loss of vulnerable species like the Yelkouan Shearwater.

Thankfully, many organizations are taking steps to combat this issue in response to increased cat populations. Unfortunately, these programs for control have been relatively ineffective in the past, wasting valuable time and resources while doing little to actually decrease problematic cat populations (McCarthy, Levine, & Reed, 2013). ‘Catch and Kill’ and Trap-Neuter-Release (TNR), are two examples of control that are currently utilized as a means for eliminating cat populations in at-risk areas (Robertson, 2007).

Catch and Kill is a control method by which feral cats in the wild are trapped and euthanized in order to eradicate their populations (Alley Cat Allies, 2011; Robertson, 2007). Though it is widely opposed by many animal rights activists who view euthanization as inhumane and unethical, there are many groups who believe Catch and Kill is the only effective means for control (Lednicer, 2014). However, Catch and Kill only seems to decrease the population by killing off the problem directly at hand; a decrease that is only temporary (Neighborhood Cats of New York, 2003). Because cat populations are large to begin with, it is nearly impossible to catch and kill all cats within a defined area (Alley Cat Allies, 2011). The few cats that remain in the end will continue to reproduce, repopulating the area as much as the food source in the area can support (Alley Cat Allies, 2011). Furthermore, in the off chance that all cats in the population are caught and subsequently euthanized, other feral cats from the surrounding area would quickly move into the newly vacant habitat, a phenomenon known as the ‘vacuum effect’ (Alley Cat Allies, 2011).

Alternatively, there are other cat control programs like TNR that are more widely accepted and humane, where feral cats are trapped, neutered or spayed, and returned to the wild (PETA, n.d.).  At present, TNR is the primary method for stabilizing and preventing the expansion of feral cat populations, but recent studies have shown that TNR may not be as effective at decreasing cat populations as previously thought (Longcore, Rich, & Sullivan, 2009. This is primarily due to hormones and behaviors associated with feral cat breeding that enable feral cats to establish dominance in their territory (Finkler & Terkel, 2010).  Typically, feral cats live in colonies dominated by hierarchical breeding structures (Mendes et al., 2006). The dominant males in a colony are able to claim territories and access to females by exhibiting aggressive hormone-driven behaviors towards other less dominant males (Mendes et al., 2006). When you neuter a male cat and remove its sexual organs altogether, you also remove the hormones that are necessary for preserving its colony’s structure (McCarthy et al., 2013).  As a result, the vacuum effect comes into play once again as dominant males who have been neutered and stripped of their hormones step out of the way for other viable unneutered males to take over (McCarthy et al., 2013). Furthermore programs like TNR tend to extend feral cat lifespans, making it nearly impossible to effectively eradicate their populations (McCarthy et al., 2013). Due to aggressive behaviors and low tolerance for competing cats nearby, un-neutered and un-spayed feral cats tend to live out their lives between 267 days (females) and 593 days (males) (McCarthy et al., 2013). Neutered or spayed cats, however, can live an extended lifespan of up to 730 days (McCarthy et al., 2013). This is due to both the care provided by vets during the surgical process and the physiological changes that feral cats undergo after the removal of their sexual organs (Finkler & Terkel, 2010). Consequently, cats that live longer are also able to breed for longer (McCarthy et al., 2013). As a result, if all cats in a population are not trapped and neutered, TNR can can actually promote  population growth as neutered cats live longer, healthier lives (Longcore, Rich, & Sullivan, 2009).

It is clear that a more effective approach to feral cat control is necessary for the successful reduction in problematic feral cat populations. Trap-Hysterectomy-Vasectomy-Release (THVR) is an alternative, humane, and potentially more effective means for the control of feral cat populations. In contrast to neutering procedures where sex organs are removed altogether, a routine vasectomy simply blocks the flow of sperm (Primovic, 2015). This procedure renders male cats sterile while conserving the sexual organs and hormones that promote key behaviors for limiting the proliferation of populations (McCarthy, 2013). By retaining key hormones for aggression feral cats can continue to defend their territory against other viable males, despite their inability to successfully reproduce. This leads to a much quicker reduction in cat populations by reducing the ‘vacuum effect’ that is often characteristic of feral cat populations controlled with TNR and Catch and Kill (McCarthy et al., 2013).

The conservation of feral cat sex hormones also allows male cats to retain their sex drive and unproductively mate with females providing both a physical and biological barrier to reproduction for other non-sterilized males (McCarthy et al., 2013). For example, female cats are physically unable to mate with two male cats at once. Therefore, if a female is ‘mating’ with an unproductive male, she cannot also be mating with a viable male at the same time (McCarthy et al., 2013). If we introduce males sterilized by THVR into the population, the number of successful breeding attempts will therefore go down because females will be wasting their time mating with males that cannot impregnate her. This act of ‘unproductive mating’ may also induce a ‘fake pregnancy’ for females that may last up to 44 days, during which the female cannot be inseminated because the body is tricked into thinking it is pregnant (Paape, Shille, Seto, & Stabelfeldt, 1975). This phenomenon has the potential to reduce the amount of sexual receptivity from a total of 21 potential mating periods within a breeding season to as low as 4 or 5 (McCarthy et al., 2013). Reducing potential mating periods means there is less time for females to be impregnated, which subsequently leads to less cats being born altogether.

In a study by McCarthy, Levine and Reed (2013), free roaming cat populations were computer-simulated to be controlled by way of three methods of eradication: lethal control, TNR, and THVR (McCarthy, Levine, & Reed, 2013). The data they found suggested that populations of cats could be fully eradicated by way of THVR within 11 years at capture rates as low as 35% whereas TNR or lethal control required up to an 82% capture rate for complete eradication (McCarthy et al., 2013). Low catch rates are a consistent problem for programs like Catch and Kill and TNR due to issues associated with the ‘vacuum effect’. THVR bypasses this problem by requiring lower catch rates with the help of hormones that promote sexual and aggressive behaviors (McCarthy et al., 2013). THVR as a means for controlling overpopulated species is not an entirely new phenomenon. In fact, vasectomies and hysterectomies were explored as a method for control of a number of problem species, including deer (Haight & Mech, 1997) and wolf (Sanders, 2017) populations in urban areas. People are also becoming more and more interested in opting for vasectomy and hysterectomy procedures for their pets over neutering and spaying, as they become increasingly concerned with the effects of disrupting hormone balances in animals (Parsemus Foundation, n.d.).

THVR obviously has the potential to be a feasible means of control and it is imperative that we take steps to implement THVR control programs on at-risk islands. Due to their menacing predatory behavior, human-introduced predators like the feral cat are posing a significant threat to vulnerable island species like the Yelkouan Shearwater, whose populations are in steady decline. If we do not take steps to reduce problematic populations of feral cats, the beloved wind chaser of the sea stands no chance and will undoubtedly face extinction in the coming decades. Today, humans have the opportunity to save this species, but only if we take steps now to effectively reduce populations of feral cats. THVR is by far much more effective than the methods of control we’ve been using in the past. The time is now to embrace THVR, end the feral cat problem, and give the Yelkouan Shearwater a fighting chance once and for all.