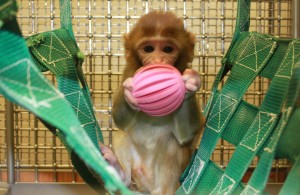 Research laboratories around the world utilize animals as their subjects in hopes of making scientific discoveries that will benefit humans. However, in exchange, the welfare of these animal subjects becomes a concern, especially that of non-human primates. In the last year, the poor welfare of these primates has been exposed, as Harvard Medical School announced it’s plans to close down their primate research facility. They came to this decision as a result of multiple citations issued for incidents occurring from 2011-2012. Although they stated that their decision to shut down was based on financial hardships, a string of incidents resulting in multiple primate fatalities suggests there was more that led to that decision (Valdmanis, 2013). Valdmanis (2013) states that there were different causes to the death of four primates, including an overdose of anesthetic that led to liver failure in one, dehydration in two others, and one that suffered accidental strangulation by a chain attached to a toy. Based on this sequence of isolated events, the welfare of non-human primates in laboratory settings is a concern, as multiple deaths have occurred due to neglect. If primate research laboratories continue to operate in their current condition, this neglect will continue. If these conditions are not made known to those who work in these laboratories, the same careless mistakes will continue to be made. While there are a number of regulations in place in regards to the treatment of primates, the next step towards bettering their welfare seems to be environmental enrichment.

The root of the concerns with the welfare of non-human primates stems from the lack of environmental enrichment in the laboratory settings, which allows for species-typical behavior such as perching, grooming, foraging, and toy manipulation (V. Reinhardt; A. Reinhardt, 2008). Beaver (1989) notes that this lack of enrichment leads to depression, aggression, and self-mutilation among the primates. Since many laboratories are shutting down based on the welfare concerns of primates, research on primates altogether may come to a stop. Primate research is important because this species is the most closely related species to humans, which means that utilizing them for research will be beneficial to finding cures for diseases that affect the human population (Gabarini, 2010). In addition to this, experimental findings that are skewed, resulting from decreased welfare, could have negative impacts on humans that are using the drugs developed through the research (Shively, Clarkson & Kaplan, 1989). Shively et al. (1989) described a significant increase in the incidence of coronary artery atherosclerosis in female cynomolgus monkey housed alone, this underlying physiological occurrence holds the potential to skew reactions to testing and medications. Therefore, for better treatment of non-human primates, a laboratory setting should be created that mimics their natural habitat and allows for them to practice their natural behaviors.

Since non-human primates naturally live in social groups, housing them in close proximity to one another ensures social contact and avoids the development of abnormal behaviors. For example, Thom and Crockett (2008) propose placing animals in cages with a grooming contact bar panel, allowing social grooming to occur. The authors also state that the social needs of these animals can be met if they are housed together in large cages, connected “run-through” cages, or in cages connected by tunnels that allow for physical contact.  Beaver (1989) states that a study placing non-human primates in isolation identified development of abnormal behaviors, which included body clasping, rocking, hyperaggression, rigid stances, sexual dysfunction, clinging, repetitive circling, and self-mutilation (p. 7). These findings exemplify the critical importance of ensuring that non-human primates are housed in a setting that allows social contact.

Further research is being conducted on how to provide primates with the opportunity for social interactions while still providing scientists the opportunity to work with primates on an individual basis to obtain valid results and measurements. A social tethering system allows for scientific testing to take place while still “[p]rovid[ing] primates with the opportunity to engage in species typical behavior and thereby minimiz[ing] conditions that have been identified as contributing to the development of abnormal behaviors associated with individual housing” (Coelho, 1990, p. 388). This system still effectively allows scientist to sample body fluids, monitor physiological parameters, collect urine, monitor food/water consumption, and monitor their physical activity and social interactions. The Coelho (1990) system consisted of a specialized cage with a section for housing small social groups of adult baboons, and another section consisting of the tether and indwelling catheter system to collect samples. This system allowed for up to four baboons to be housed together, and this number could vary depending on the size of the housing unit created. The units themselves had the opportunity to be subdivided by means of a wire fence. “The tether system consisted of a backpack, a cloth jacket, a stainless-steel flexible cable containing electrical cable and catheters, and a saline infusion pump mounted on the top of the cage”(Coelho, 1990, pp. 390). Depending on the specific type of research is going to be conducted with the primates, this system could provide an excellent model for research housing.

In addition to the importance of providing social conditions to research primates, providing other components that simulate a natural habitat, such as the presence of wood and the opportunity for foraging, is vital to increase welfare. For most primates, species-typical behaviors include perching, climbing, and foraging for resources such as food. The United States Department of Agriculture requires that animals held in captivity be provided enrichment that allows the expression of these activities (United States Department of Agriculture, 1991). The opportunity for primates to engage in many species-typical behaviors can be provided through wooden stimuli. Reinhardt (2000) states, “wooden objects provide inexpensive, safe, long-term and effective stimulation for the expression of non-injurious, species-typical behaviors such as perching, gnawing, gouging, manipulating and playing” (p. 13). Furthermore, there is a tendency for wood to warp over time, and this provides primates with continual intellectual stimulation (Luchins, Baker, Gilbert, Blanchard, & Rudolf, 2011).

The benefits to providing wooden enrichment expand beyond it’s inexpensive cost, low hazard threat, and strong promotion of species-typical behavior. For example, Simonson (2002) states that using hydroscopic materials, such as wood, increases indoor comfort and air quality in comparison to similar structures made of steel and concrete. This statement validates their research by saying in their tests, “…as many as 10 or more people of 100 are satisfied with the thermal comfort conditions (warm respiratory conditions) at the end of occupation.” Similarly the authors determined occupant discomfort was reduced by 25%(Simonson, 2002, abstract). Given the close relationship between humans and non-human primates it seems fair to say that they should be housed in a comfortable environment. It is important to create a comfortable environment for nonhuman primates to create accurate test results. This is comparable to taking a test in a hot and humid room. The heat makes it difficult to focus, but the humidity makes it that much worse, not to mention participants are unlikely to perform to the same standard as they might in less humid conditions.

Some opposition to naturalistic habitats in a research or laboratory setting has been presented from researchers concerned over the potential of wood to present as a fomite. If this were the case, wooden objects, such as perches and toys, would need to be replaced frequently to prevent potential disease transfer, which would pose an expense on researchers (Bayne, Dexter, Hurst, Strange & Hill, 1993). This concern has been invalidated by research done on the sanitation of wood. After researchers sanitized three different sources of primate cages, they found that Manzanita wood displayed on 13% growth of gram-negative bacteria compared to a 50% growth rate on plastic toys and 32% growth on the actual cages (Luchins et al., 2011, p. 6). This indicates that wood will not pose threat as a potential fomite and that it’s easy sterilization makes wood an excellent candidate for a source of environmental enrichment. Reinhardt (1997) expands on this by showing that with wooden objects being sanitized in the same routine as cage sanitation procedures there has been no incidence of health risks or injuries associated with wood.

Opposition to research involving animals in any form will hold that the shutting down of research laboratories is a cause for celebration. However, in terms of human medicine, this is not the case. The utilization of primates in research holds a critical importance to contemporary medicine (Gabarini, 2010). Incredible advances in the treatment of Parkinson’s diseases, Alzheimer’s disease, and AIDS have been made in the past decade, and these advances would have been impossible without the model of primates (Capitanio & Emborg, 2008). The understanding and treatment of alcoholism, sleep related disorders, and behavioral disorders are also results of the major advances made from research conducted on primates (Garbarini, 2010). In the contemporary world of medicine, primates serve a vital role in the treatment of human disease and disorder, and as long as steps are made to provide these primates the maximal care and welfare, scientists should be able to continue their advances. Applying a naturalistic environment should be the key to establishing this maximum welfare.

It is clear that there is a lack of enrichment in current research laboratories, leading to the decreased welfare of nonhuman primates. Enrichment is necessary not only on an ethical standpoint, but it is also required to successfully conduct primate research and obtain the most valid results. Enrichment provided through the use of housing that allows for social contact and naturalistic elements such as wooden toys and foraging stimuli simulates a natural environment at which primates function best. This natural environment should promote species-typical behaviors and decrease the incidence of depression, agitation, self-mutilation and stereotypies amongst primates. This will correspond to an increase in primate welfare, which will allow breakthroughs in modern medicine to continue. Currently, the American Association for Laboratory Animal Sciences regulates and audits laboratories through the Institutional Animal Care and Use Committee (IACUC). While the IACUC enforces strict regulations in terms of cage height, sanitation, and food availability, there are not specific guidelines in terms of enrichment (Garber et al., 2011). Hopefully, by reviewing the information presented in this paper and other research, the IACUC will be influenced to mandate policies that promote enrichment and increase the welfare of non-human primates used in research.