Every year, the United States Bureau of Land Management (BLM) rounds up thousands of wild horses and burros, putting them into an adoption program to find good permanent homes. They do this to prevent an overpopulation of the horses that can cause dramatic ecological effects in and around their habitat. However, for three full years, between 2009 and 2012, 1,794 of these federally protected wild horses were heartlessly sold for slaughter. Tom Davis, friend and neighbor of Ken Salazar, former Secretary of the Interior, illegally bought these wild animals from the BLM and sold them to a Mexican Slaughterhouse (Glionna, 2015). Davis bought the horses under the facade that he was selling them to Mexico for movies. The report from the Inspector General’s office criticizes the bureau for not running a more in-depth check on Davis and his intentions with the horses, seeing as he bought so many. Even after receiving reports that Davis was sending the horses to slaughter, the BLM continued to sell to him illegally. Many critics say that the Bureau of Land Management adheres to the needs of the ranchers who lease the public land for below market cost (Glionna, 2015)

Since the Wild Free Roaming Horses and Burros Act of 1971, the BLM eradicated close to 300,000 of the mustangs, eliminating them from more than 20 million acres of federal land (Free Thought Project, 2015). The BLM roundups hold the mustangs in federal holding facilities in the West. Currently, there are close to 50,000 of these wild horses in the facilities, where there are only about half of that number in the wild. The BLM used Davis as a go-to to get rid of the excess horses in holding. However, Congress prohibits the BLM from selling these captured horses to slaughterhouses (The American Wild Horse Preservation Campaign, 2012). A report released by the Inspector General of the United States Department of the Interior states, “Managers…failed to enforce [the Bureau of Land Management’s] policy of limiting the sales of horses and ensuring that the horses went to good homes” (Free Thought Project, 2015).

Mustangs in the Wild

The problem is that these wild mustangs represent freedom for the American West, but the population has grown to almost twice as much as the land can sustain. The land can sustain 26,000 horses, but there are 48,000 roaming the land. That is 22,000 more than the land can support (Philipps, 2014). Too many horses is detrimental to the grass and water supply, which farmers need for their livestock. Horses also cause soil erosion, leading to soil infertility, instability, and causes changes in hydrology due to the trampling (Beschta, 2012). Keeping the horse population down to the recommended 26,000 is healthier for the horses as well as the land (Philipps, 2014).

Wild horse populations in the western United States have been steadily rising due to a lack in natural predators, a ban on human hunting of horses, and the large growth rate within a horse herd. The mustang finds itself prey to a select few predators such as wolves, mountain lions, coyotes, and occasionally bears. The hunters must be fast enough, strong enough, or cunning enough to catch an adult horse. Most of theses predators lack these skills and are mostly unsuccessful. Humans actually top the list of horse predators. After the Wild and Free-Roaming Horses and Burros act of 1971, all management of mustang herds came under the jurisdiction of the Bureau of Land Management and the US Forest Service, essentially putting them under government protection (Gorey et al., 2016). Thanks to this Act, it became illegal for anyone to shoot and kill horses, and placed the responsibility of population management in the hands of the BLM. Unhindered now by any natural or human predators, horse populations can grow at rates as high as 18-25% per year (USGS 2016). This means that every 3-4 years the population size would double, not taking into account death rates. If we allow the population to continue to grow, it will only become more difficult to manage these horses, and make it harder and harder to control the damage that these animals can have on their environment.

In the west, the mustangs cause soil erosion from trailing and nomadic lifestyle. First, Ostermann-Kelm et al. (2009) claim that trampling leads both directly and indirectly to erosion, trailing has over time scraped off the rich topsoil. The topsoil layer helps with soil fertility, stability, and hydrology (Beschta, 2012), the key support for all plant life. Beschta et al., (2012) claim since the mustang population continues to rise at a rate of 25% per year.  The researchers classified over 21 kilometers of trails as having significantly compacted soil compared to those quadrants 0m, 0.4m, and 1.4m adjacent to the trail. Ostermann-Kelm et al. (2009) tested the soil strength read between 0 and 4.6 kg/cm2, with 4.6 kg/cm2 being the maximum reading. Higher numbers of micro invertebrates were found on and 0.4m from the trails, and the number of micro invertebrates decreased with increasing soil strength. Trailing affects the micro invertebrates homes. As result, mustangs erode the soil quality thus affecting other animals’ home and vegetation.

With the increasing horse population in Western America comes a decrease in vegetation because of the horses’ grazing. First, in the article “Effects of feral free-roaming horses on semi-arid rangeland ecosystems: An example from the sagebrush steppe”, the author says that horse-grazed areas have lower density of herbaceous and sagebrush cover, along with less plant species and diversity. Davies et al. (2014) says that mature sagebrush density was 2 times greater in un-grazed blocks than in grazed blocks. Also plant species diversity was 1.2 times greater in un-grazed areas than in those that were grazed on by horses, and these were just the areas that they had been observing the horses grazing. Next, the horses cause damage by trampling the vegetation with their hooves and heavy bodies near water sources and in general grasslands as well. In 1994 the BLM and FS reported that western riparian areas were in their worst condition in history (BLM and FS 1994)” (Beschta et al., 2012, p.477). With the feral horse population increasing every year, you can expect the damage to plants around streams to continue to worsen. When the mustangs wade in streams it causes erosion due the horse’s hooves. This also causes temperature spikes and ultimately affecting fish life. Lastly, with all the compaction to the vegetation, it’s made the plants’ intolerance to heat and drought stresses to decrease, so in dry seasons, many of the plants are beginning to die (Beschta et al., 2012, p.480). In conclusion, the mustang population caused vegetation degradation. 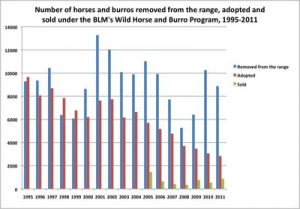 Graphic depicting number of horses captured from the range compared the the umber sold or adopted (hcn.org)

The federal government already recognizes the huge problems caused by the large feral horse populations. The BLM currently has a budget of 77.245 million dollars for the mustangs and burro program (Gorey et al., 2016). Within this large sum of money, nearly 50 million dollars, or about 66% of the budget, is allocated to off-range holding costs (Gorey et al., 2016). That means nearly two-thirds of the budget for this program goes to housing and feeding these horses, as well as all the maintenance and employee costs that go along with that. The BLM has reported only about 2400 horses either adopted or sold in the 2015 fiscal year, but that it removed 3100 horses from the range in an attempt to control herd size (Gorey et al., 2016). This amounts to a total of 700 horses the BLM was responsible for housing and caring for during 2015. As of 2016, the U.S. Bureau of Land Management manages nearly 40,000 wild horses. The BLM keeps these horses on 179 herd management areas that amount to around 32 million acres spanning across 10 western states (USGS 2016). Then, compare this to just 10 years ago in 2006 when the BLM reported there were only 27,600 wild horses over the same range (Gorey et al., 2016). If there were a way to reduce herd size without the trouble of housing them until they get sold or adopted, it would be much more efficient. Rising, uncontrolled horse populations in the western United States are causing damage to the local ecosystems, and BLM funding must go to contraceptive programs.

Contraception is a clever and harmless solution to this problem. There is currently a contraceptive vaccine called PZP used by the BLM that when administered to horses, renders them incapable of getting pregnant for 1 year (Gorey et al., 2016). There is another vaccine, PZP-22, that renders them incapable of getting pregnant for 22 months (Gorey et al., 2016). Using this contraceptive strategy, the BLM would either round the mustangs up to administer the vaccine, or shoot the mustangs with darts from a longer distance. This method requires much less management and allows the horses to remain free in the wild, while still significantly reducing the population, as long as it is being administered correctly. Studies done on Shackleford banks horses in North Carolina have shown that “Inoculating females every second and even every third year significantly reduces pregnancy in Shackleford Banks horses and other wild populations” (Nunez et al. 2008). The decreases in progesterone lower than five ng/ml compared to over five ng/ml in controlled group means this hormone that stimulates ovulation has decreased with the use of SprayVac (Bechert, U. al,2013,p. 46). This same vaccine effectively controlled elephant populations in South Africa. Ten years after use of the PZP vaccine began, the study found the contraceptive to have an impact of a “60% reduction in overall population growth rate” (Delsink et al. 2012). PZP is a proven method for reducing population growth rates, and has already been implemented by the BLM. However, it is not proving as successful as it should due to underfunding. There is a simple solution to this problem. The BLM must reallocate its resources and stop spending two-thirds of its’ budget on housing, instead shifting this money to the efforts of the PZP program. This is a much more humane way to allow mustangs to stay in the wild, and only temporarily renders them infertile until the vaccine wears off. This method allows the BLM to control how many horses foal in any given year by fluctuating how many horses receive the vaccine.

This proposal will improve the lives of thousands of mustangs and ranchers while still lowering the overall population of horses in the western United States. Over time, this proven method should work to decrease the wild mustang population and restore balance to the ecosystems that are so negatively affected. If the BLM put more funding and effort into the PZP program, it could significantly affect the population in one or two pregnancy cycles (Delsink et al. 2012). It is the most humane method, allowing the horses to maintain their freedom and run wild across the lands of the American west. The birth control for feral horses harmlessly and effectively renders the horses that are vaccinated incapable of reproducing for a temporary period. Once the population shrinks to a more manageable size, the impacts on the ecosystems should noticeably improve, restoring the American west to it’s former glory.