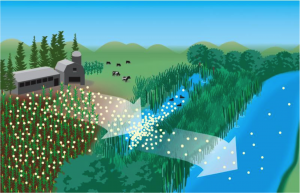 Even in today’s world with new regulations, aquatic species are still dying due to the large amount of fertilizers that are leaching into our waterways. Fertilizers contain high levels of nitrogen and phosphorus, which can lead to oxygen depletion, overgrowth of vegetation, and fish kills.  In order to protect wildlife and aquatic species from pesticides, herbicides, and fertilizers that pollute our waters, buffer zones need to be enforced.

Fertilizers contain large amounts of nitrogen and phosphorus. When these chemicals runoff agricultural fields into waterways, they can lead to accelerated growth of aquatic plants. Nutrients from fertilizer runoff encourages the growth of nuisance algae through the process of eutrophication.  According to the United States Department of Agriculture, “[e]utrophication is the natural aging of lakes or streams brought on by nutrient enrichment” (USDA, 2003).  Eutrophication is the number one cause of impaired water quality. Due to eutrophication, there is an increased growth of algae and aquatic weeds, harming aquatic life  (Davies et. al, 2001).

Chemical runoff and eutrophication results in the formation of massive algae blooms. The most common and visible nuisance algae in freshwater are the cyanobacteria or blue-green algae. Cyanobacteria are single-celled organisms that naturally exist in fresh or salt waters (Biello, 2008). When there are a lot of nutrients available in the water, the bacteria can grow rapidly or bloom to form a visible film or scum on the surface of the water (Hoyle et al., 2009).

Once the algae dies, it sinks to the bottom and starts to decay.  This decomposition process removes oxygen from the water, creating dead zones that cannot support aquatic life (Scientific American, 2009). Surveys done by the Environmental Protection Agency, or EPA, indicate that areas with high lawn chemical use (without a buffer zone) have lower population densities of aquatic invertebrates (Burn, 2003, p 584).  Low oxygen levels, also known as hypoxia, cause massive fish kills. Researchers reported over 235,000 tons of fish are lost in the Gulf of Mexico annually due to hypoxia (Biello, 2008).

Every year, pesticide use causes the decline of fish and other aquatic species. Not only do they result in the loss of thousands of fish but also frogs, turtles, mussels, water birds, and other wildlife. “Fish and other wildlife species, including rare and endangered ones like the peregrine falcon, bald eagle, and osprey, have been victims of pesticide poisoning” by consuming toxic plant materials or aquatic species (Helfrich et al., 2009). In order to protect the environment and its precious wildlife, buffer zones need to be enforced.

Buffer zones are protected areas adjacent to waterways that restrict the transfer of pollutants. Buffer zones protect the environment and its inhabitants by acting as buffer between waterways and land (Burn, 2003, p. 585). The addition of pesticides without buffer zones can negatively impact an organism’s environmental habitat (Bunzel, Liess, & Kattwinkel, 2014, pp. 90-97).  Chemical runoff can severely alter the biological, chemical and physical properties of waterways (Boyd, 2011, p. 1-2). Buffer zones prevent such pollution by trapping sediments and chemicals before they enter the water. With buffer zones, the mortality rate of aquatic species can be limited to 10% or less (Burn, 2003, p. 585).

In the research article “Landscape Parameters Driving Aquatic Pesticide Exposure and Effects” published by the Environmental Pollution journal, Bunzel, Liess, and Kattwinkel (2014) argue that buffer strips can prevent pesticide drift and improve the health of aquatic ecosystems. The authors found that buffer strips at least 5 meters in width reduced the amount of pesticides in the water(Bunzel, Liess, & Kattwinkel, 2014, pp. 90-97).

Buffer zones provide food, shelter, water, and breeding sites for many animals including birds, amphibians, and reptiles. Many animals create habitats near streams, ponds, and waterways for easy access to water and environmental protection (PennState, 2014). Chemical pollution not only kill these habitats, but the wildlife that depends on them to survive.

According to Boyd (2001),  J.S. Larson of the Massachusetts Fisheries and Wildlife Board suggests that in some cases, Massachusetts wetland protection regulations fail to protect wetland wildlife (Boyd, 2001, p. 2).  In recent studies of major rivers and streams, researchers from the United States Fish and Wildlife Service detected lawn chemicals in 90% of the waterways in the United States (U.S. Fish and Wildlife Service, 2013). Studies such as these and the continuing presence of algae blooms indicate that buffer zones are not being enforced well enough to stop this problem.

In order to prevent water pollution, control policies must be effective. Policy effectiveness depends on legal enforcement and human awareness and compliance (Kirkpatrick et. al 2014, p. 898). Massachusetts laws encourages spectators to report violators. The EPA enlists help from the public to ensure compliance (EPA, 2014).  However, the safety of our aquatic ecosystems can not rely solely on spectators. Only if a violation is reported or suspected, does the Massachusetts Association of Conservation Commissions conduct an inspection (Commonwealth of Massachusetts, 1997, p. 36). Oftentimes, problems with violators are resolved “through a phone call… or letter… to achieve compliance or remediation” (Commonwealth of Massachusetts, 1997, p. 37).

In order to protect aquatic life in New England, the EPA needs revise their enforcement program on buffer zones. To make buffer zone laws more effective, we suggest the Environmental Protection Agency to stop depending on spectators for violation detection and to take matters into their own hands. The EPA needs to have unannounced inspections of all major agricultural farmland adjacent to waterways. Currently, the EPA only conducts inspections when there is warrant to believe there is a violation. Every farm that could potentially impact a wetland should be inspected annually for signs of chemical misuse or water pollution. If a violation is reported or suspected, the EPA should conduct a thorough investigation of the property. Phone calls and letters may save time, but personal visits ensure the safety of our wetlands.

Due to the increasing need to produce a high yield of crops, commercial farms are a major source of wetland pollution (Commonwealth of Massachusetts, 1997, p. 21). Fertilizers are required to replenish the soil for healthy crops and maximum production. A dollar spent on fertilizer can bring $10 worth of corn (Haller et al., n.d.). To maximize yields, some farmers and landowners plant to the very edges of the field to increase their crop surface area. For this reason, many farmers would argue against strict buffer zone enforcements. It could be argued that 150 feet of land (the buffer zone) could be used to plant more crops to feed our growing society.

Although this is an excellent point, disregarding buffer zones could greatly impact our wetlands and aquatic ecosystems. Without a buffer zone to trap sediments and lawn fertilizers, many of New Englands largest rivers and streams will be severely contaminated by hazardous chemicals. For a healthy environment, commercial farmers must be cognisant of buffer zones and better adhere to the regulations set by the EPA,  Massachusetts Wetlands Protection Act, and River Protection Act.

The best way to alleviate water pollution and algae blooms is prevention. This can only be accomplished through fertilizer user compliance and legal enforcement. The Environmental Protection and other state and federal government groups and agencies must patrol areas approaching buffer zones to ensure compliance. With the right communication and enforcement we can protect the environment, its water sources, and its wildlife. The Wetlands Protection Act set forth by the Massachusetts government paves the way to alleviate the problem by restricting chemical usage near waterways. However, these chemicals are still being leached, killing thousands of fish and other aquatic species. We must continue to protect our waters and its inhabitants by adhering to laws set in place. The time is now to make changes in the ways we enforce buffer zones in Massachusetts, before it is too late.

Boyd, L. (2001). Wildlife use of wetland buffer zones and their protection under the

Burn, A. (2003). Pesticide buffer zones for the protection of wildlife. Pest Management

Commonwealth of Massachusetts (1996). Farming in wetland resource areas: a guide to