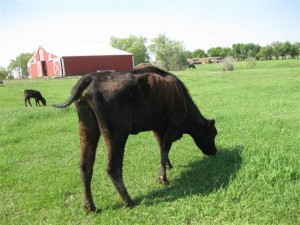 This is a cow grazing on land where fracking occurs.  Part of this cow’s tail is missing as a result of exposure to chemicals from fracking fluids.
Schilke, J. (2012). Livestock falling ill in fracking regions [picture]. Retrieved April 7, 2015 from http://investigations.nbcnews.com/_news/2012/11/29/15547283-livestock-falling-ill-in-fracking-regions

Are you worried about contaminated beef from fracking land?

Americans love beef. We consume as much as 26 billion pounds of meat every year knowing that it’s safe and uncontaminated, right? (“The United States meat industry at a glance…,” 2011) Many people do not know where their meat comes from before they buy it in supermarkets. In the recent years there have been cases where cattle in certain areas are falling ill and dying, while the reason cannot be 100% confirmed. “In Louisiana, 17 cows died after an hours exposure to spilled fracking fluid” (Royte, 2012, para. 6). While these cases are relatively rare, it should be a concern for consumers who could be affected.

While fracking can be done in plenty of areas away from farmland and cities or towns, it is becoming more common for farmers to lease their land (or hand over mineral rights) to fracking. A farmer’s livestock and land are most likely their most valuable assets. It is important to keep the livestock and land in top condition, so as to make a profit to keep their farm going and to sustain themselves comfortably. When the cattle falls ill, it can cause a number of complications to the farmers: veterinarian fees, loss of production, inability to slaughter, and the list goes on.  Farmers who lease their land to fracking unknowingly run the risk of adverse effects to their livestock and land. They should consider leasing their land, or investing, in solar panels because it is a safer alternative to fracking in terms of animal and human health, crop and environmental health, as well as providing economic benefits.

Fracking is a relatively new way of extracting natural gas from deep underground. “Shale gas is embedded in dense rock, so drillers use a mixture of water, sand, and chemicals to open up fissures in the stone through which it can escape” (Kolbert, 2011, para. 4). This process was discovered in the 1940’s but hasn’t become popular until after 2005. The fracking boom is caused by the lack of oil in the U.S and the profitability of the new drilling process. Since the drilling and extraction takes place so far underground, many people might not think it poses a threat to the environment.

What’s the Problem with Fracking?

Little is actually known about fracking and its effects to land and the environment because of how new it is. Many fracking companies are not required to disclose the chemicals used in their fracking fluid. “Of the roughly 30 states where fracking is now underway, only six require advance disclosure of the fracking chemicals that will be used” (Shulman, 2014, “A National Problem”). The lack of regulation, along with the ability for fracking companies to not disclose the chemical additives they use in the water causes a serious problem of uncertainty for both farmers and consumers.

Fracking fluid is the liquid injected into the well that is used to crack the rocks and extract the natural gas. Every well may be using a different combination of fluids to get the job done. It is not required by companies to disclose the contents and additives of these fluids that may or may not be toxic. Some have been found to contain methanol, radium and corrosive salts that come back up from a mile underground (Kolbert, 2011).  Many chemicals commonly used in fracking fluid have been found in drinking water in some areas where fracking is prominent, such as Wyoming and Pennsylvania (Kolbert, 2011).

Fracking has proven to be harmful to animals living on land where fracking occurs in the United States. The 17 cows from Pennsylvania that were mentioned earlier were not able to be sent to slaughter because they died as a result of their exposure to the fracking fluid (Bamberger & Oswald, 2014).  Another herd of cattle in Pennsylvania “was quarantined due to direct exposure to the drilling wastewater” (Bamberger & Oswald, 2014, p. 1862) and then experienced high reproductive failure.   Once off quarantine, some of the cows went to slaughter.   In order for cows to be slaughtered for human consumption, they must be able to walk into the slaughterhouse, but no further testing is necessary (Bamberger & Oswald, 2014).  This raises the question whether the cows exposed to fracking are actually safe for human consumption.  Would you want to eat cattle that had problems due to chemical exposure and then were not tested for adverse effects or chemicals not normally in their system?

Cattle are not the only ones impacted by fracking.  Would you want to live on that same land if that’s what happened to cattle?  Air and water pollution from fracking fluid also has negative affects on people.  One mother and her son actually had to move off of their farm to get away from the air pollution in shale gas wells in Pennsylvania.  The mother lived in her car while the young son stayed with friends so he could still go to school (Krupp, 2014).

The pollution from fracking spreads farther than human and animals and may affect crops, therefore reducing a farmer’s profit.  Kip Gardener is a farmer in Ohio trying to become certified as organic when surrounding farmers have leased their land to oil and gas drilling.  Kip is worried about fracking fluids leaching into his land, which would prevent him from being certified as organic if certain chemicals are detected in soil or plants (“Fracking and farmland… story”, n.d.).

If unwanted trace metals can get into crops in Nigeria, what’s to say they won’t end up in crops in the United States?

Many people in the U.S. have had methane leaking into their water supply after fracking began to take place nearby.  Steve Lipsky, who lives in Weatherford, TX, is near a fracking operation and his well had a build-up of methane, which caused his water pressure to go down.  Now, when he turns on the faucet to his garden hose, he can light the contents on fire (“Inspector general finds EPA… fracking,” 2013).

While I would not feel comfortable drinking the explosive water in my home, according to Pennsylvania State University it is not toxic to drink water with methane in it (Swistock and Rizzo, 2015, para. 2).  The problem with methane is that it can escape from the water and cause an explosive hazard.  “There have been cases in Pennsylvania where houses, camps, or wells have exploded due to methane accumulation” (Swistock and Rizzo, 2015, para. 2).

The methane leaking out through the water supply that has not been burned is not environmentally friendly.  “According to the Intergovernmental Panel on Climate Change… methane is 84 times as potent a greenhouse gas as carbon dioxide” (Krupp, 2014, “Dirty Water”).  The Environmental Protection Agency (EPA) compared methane and carbon dioxide pound-wise and stated that methane’s environmental impact is 25 times greater than carbon dioxide in a 100-year period (Overview of greenhouse…  emissions, 2015).  “Today, about one-third of methane emissions in the United States come from the oil and gas industry” (Krupp, 2014, “What lies beneath”).  Fracking has many negatives associated with it, which outweigh the good.  Many people think we can’t get rid of fracking because we need it as a source of energy, however, there is a better energy option.

A better alternative to gaining energy is through solar power.  On the Spottswoode Estates Winery in St. Helen, California, there are 2 grid connected Photovoltaic (PV) systems. PV systems are solar electric generators. They are used to power the vineyard’s irrigation pumps by producing 32.76kW per day.  The system for the barrel room and offices produces 40.39kW per day.  Together, these systems provide 65% of the total energy used in the winery.  Oakurst Dairy in Portland, Maine is using solar hot water systems. They use two 1,500 gallon tanks powered by solar saving them $14,000-$20,000 per year because of their decrease in oil consumption (Xiarchos and Vick, 2011, p. 31).

Solar Power as an Alternative

Replacing fracking will be most beneficial for the farmer and the surrounding community. Fracking companies are going to farms to offer to lease or buy some land to collect natural gas for energy production. Fracking can be extremely hazardous to the surrounding areas through the leaching of chemicals into the soils, waterways, and water tables. Instead, farmers could rent or lease to solar companies and also implement solar technologies on the farm.

We recognize that there are some environmental hazards associated with the use of solar panels.  Depending on the size of the array, it may be able to create a heat island or a microclimate. Solar panels are designed to attract the sun to collect energy, but with this electricity created heat is generated.  Depending on the size of the array it could create a heat island effect that can raise the surrounding temperature by a few degrees. These temperature changes could dramatically change the ecosystems around the array if they are sensitive (Gunerhan, et al., 2008, p. 135).  Overall, however, this negative impact associated with solar panels is less harmful than the impacts fracking has.

Another environmental effect comes when the panel has reached the end of its life and is brought to a landfill or is recycled.  Cadmium is a heavy metal that is very toxic and present in solar panels as Cadmium Telluride (CdTe). Bringing the panels to a landfill to dispose of would require the landfill to screen for the toxins leaching out.  In order for the solar panels that are brought to landfills to become a toxicity problem there would need to be more than 354,000 panels to be disposed of annually in a single landfill (Cyrs, et al., 2014, p.524). Through recycling there is minimal to no Cadmium release into the environment, but it is still possible (Cyrs, et al., 2014).  First Solar, a U.S. CdTe PV manufacturer, sent their wastewater to a treatment plant to bring the Cadmium level down to .07mg/L.  This is less than the allowable limit from the European Union, but falls short to the Environmental Protection Agency (EPA) regulations of .005 mg/L (Cyrs, et al., 2014).  In the end the release of Cadmium into the environment by landfill or by recycling is low making solar panels a safer choice over fracking.

With Solar panels, farmland will stay free of harmful fracking chemicals, allowing healthy agriculture and clean energy production. Instead of selling out to the fracking companies who damage environmental through the extraction process and fluids used, invest in solar power. It’s a cleaner alternative energy source and will pay itself off in a few years with minimal maintenance.

Farms that choose solar power rather than sell out to fracking companies’ benefit greater in the long run. Solar power provides a clean energy source that could be used on site or fed back into the grid for profit. While feeding the grid it helps reduce the need to use fossil fuels for an energy source cutting greenhouse gasses. Where fracking companies may pay handsomely, the environmental impacts they place are enormous. From the harmful fracking chemicals leaching out into water supplies to the drilling process and all the onsite destruction. After fracking the land would no longer be able to be used for agriculture. Farmers always have to think long term, solar is long term.

We do not want fracking companies to keep ruining the environment we live in for us and our future generations.  We propose that the government steps in to help by giving incentives for people with solar panels on their land, whether they own the panels or are renting their land to have solar panels on it.

Swistock, B., & Rizzo, D. (2015). Methane gas and its removal from wells in Pennsylvania. (Penn State Extension). Retrieved April 27, 2015, from http://extension.psu.edu/natural-resources/water/drinking-water/water-testing/pollutants/methane-gas-and-its-removal-from-wells-in-pennsylvania

Xiarchos, M., I., & Vick, B. (2011, April). Solar energy use in U.S agriculture overview and policy issues. Retrieved April 28, 2015 from http://www.usda.gov/oce/reports/energy/Web_SolarEnergy_combined.pdf