It all began in 1859, when Thomas Austin brought 24 wild European rabbits from England to Australia to use for hunting (Cox, 2012).  By the 1920’s there were over 10 billion invasive rabbits inhabiting the continent of Australia and since then the population has only grown (Rabbit Free Australia, 2015). Cox (2012) stated that these rabbits reproduced in exponential quantities and currently inhabit 70% of southern Australia, which equates to 5.3 million square kilometers. These rabbits are destructive in nature; their burrowing ruins infrastructure and causes erosion, their eating destroys farmland and vegetation, and they are a threat to native species (Rabbit Free Australia, 2015). Attempts to fix the issue of the invasive rabbit species have not been successful thus far. The past solutions included releasing diseases, destroying the warrens that rabbits live in, and building a fence to keep them from spreading to other areas of Australia. None of these methods effectively eliminated the rabbit population to a manageable number (Cox, 2012). In addition, the natural predators in Australia saw a decline when the rabbit population was nearly eliminated by the released myxoma virus in the 1950s (Rabbit Free Australia, 2015).  The rabbits that survived the virus built immunity, and repopulated the island, but the predators never made a significant comeback (Rabbit Free Australia, 2015). Therefore, we propose that the de-extinction and reintroduction of the Tasmanian Tiger, also known as the thylacine, into Australia is necessary to help decrease the overpopulation of rabbits, which will consequently improve agriculture and vegetation, eliminate the threat to native species, and save infrastructure. END_OF_DOCUMENT_TOKEN_TO_BE_REPLACED

Nicole Zuidema – Animal Science
Emma Reichard – NRC
Nicole Sheridan – Animal Science
Will Holder (2005) told his story through the perspective of the ranching family he was born into. His grandfathers and great-grandfathers grew up shooting predators such as coyotes and lions in the area, so it was natural that Will follow in their footsteps and continue with that culture. He grew up with the mentality that the more coyotes you kill, the better. One day, however, he realized that after generations of killing these beasts of prey, their populations were not decreasing. After some of his own research, he found studies revealing that killing these animals just forces them to have bigger litters or a new predator moves in and kills to establish territory. This made him think differently about killing predators for reasons he didn’t even know himself. END_OF_DOCUMENT_TOKEN_TO_BE_REPLACED

The Big, Bad Wolf has been a cultural symbol of evil long before a young shepherd called wolf, or a girl in a red cape wandered from the path to Grandmother’s house. According to a local Iowa man, Maurice Clements, “wolves kill, slaughter, invade, and destroy.” (Big, Bad, Wolves, 2015, para. 1). The Native Americans described the wolves as violent warriors and thieves in their rituals and legends (Wolf Wars, 2008). In the early 20th century, the negative perception of wolves drove livestock owners to lobby for the extermination of wolves. In 1906, The U.S. Bureau of Biological Survey funded a bounty program to clear cattle grazing ranges of gray wolves (Wolf Wars, 2008). Additionally, the U.S. Congress allocated $125,000 for wolf removal in 1915 (Big, Bad Wolves, 2015, para. 2). The states of Idaho, Wyoming and Montana rarely saw the Gray Wolf after the 1930’s, and the rest of lower forty-eight states of the U.S. saw the complete extirpation of wolves twenty years later (Wolf Wars, 2008). During the 1960’s, increased knowledge of ecosystems led to the passing of the Endangered Species Act (ESA) in 1973. Within a year wolves were included under its protections (Smith, et al., 2004, p. 622). In 1987 the Canadian Grey wolves were reintroduced into the Northwestern United States with the goal of creating a sustainable target population of 300 wolves and at least 30 breeding pairs (Musiani et al., 2005). The reintroduction of wolves was successful, and wolves were removed from the endangered species list in 2009 (Musiani et al., 2010). However the successful reintroduction of wolves rekindled the human-wildlife conflict that spurred the extermination of wolves seventy-five years ago. END_OF_DOCUMENT_TOKEN_TO_BE_REPLACED

Human action is often a culprit in recent animal extinction. One such victim is the Tasmanian tiger (Thylacinus cynocephalis), or thylacine, who used to be an apex predator of mainland Australia and Tasmania (Attard, 2013). Even though the thylacine was a shy and secretive animal (Bulte, Horan & Shogren, 2003), that avoided contact with humans, it was driven to extinction as a result of human introduction of the dingo as well as human intensification (Prowse, Johnson, Bradshaw, & Brook, 2014). Overhunting of the thylacine was also thought to play a role in its extinction (Attard, 2013). The Javan Tiger and the Western Black Rhino are two other animals humans drove to extinction (Ellis, 2005). These species didn’t go extinct due to natural phenomena and so their disappearance caused imbalance in their natural ecosystems. Resurrecting species to these habitats not only could restore ecosystems, but will help protect and preserve other animal and plant species within that ecosystem. Resurrecting extinct species is now becoming a reality as science is advancing and the environment is changing. With developing biological technology, we can own the opportunity to restore ecological diversity worldwide and perhaps reverse the negative impact that humans placed. END_OF_DOCUMENT_TOKEN_TO_BE_REPLACED

Today, only four magnificent Northern White rhinos remain (Wei-Haas, 2015). These light-skinned rhinoceros have been critically endangered since the beginning of the 21st century.  The San Diego Zoo in California has one female and the Ol Pejeta Conservancy in Kenya has three females, and the last remaining male (Wei-Haas, 2015). Conservationists are fighting to prevent this species from becoming extinct. Since the last remaining male Northern White rhino is at an age where it can no longer successfully breed, traditional conservation tactics such as captive breeding are failing to provide effective results (Wei-Haas, 2015). These passive, enormous creatures used to inhabit the grassy plains of Southern Africa and roam freely, but now these defenseless survivors are on the brink of extinction without much hope for survival left (National Geographic, n.d.). Luckily, there is one method that can become the solution to repopulate the Northern White rhinoceros and similar species that are so far gone, where only a small population of the same gender or infertile individuals remain. Cloning, the process of producing a genetically identical individual using the DNA of another individual, has been used over the past decade to revive extinct species. We can use this process to clone the last male White rhino to create a male that would successfully mate with the remaining females, and thus resolve the captive breeding issue. In order to accomplish this, the U.S Fish and Wildlife Service and private organizations should provide funds for cloning-based conservation programs to repopulate endangered species that cannot be saved through traditional conservation methods. END_OF_DOCUMENT_TOKEN_TO_BE_REPLACED

The year is 1926.  In Yellowstone National Park, gunshots crack through the air. Then there is silence as the last remaining pack of wolves in the park falls.  For over fifty years, these predators were viewed as just that – wild animals that ate people and livestock – and were hunted to the point of local extinction.  It would take another fifty years for people to realize that something was wrong, out of balance, in the park since the extermination of these iconic carnivores (National Parks Service [NPS], 2015). The animals, the plants, even the very geography of the park changed. Elk overpopulated the region, devouring trees and shrubs. With less plant life, birds were left with no places to nest. Rivers eroded the soil, becoming wider, shallower, and warmer without the shade and roots of the trees. Eventually, only one beaver dam was left, damaging rivers and aquatic life even more. Coyotes flourished without competition from their larger cousins, and decimate small mammal populations, leaving little behind for raptors, foxes, and badgers (Chadwick, 2010). The Yellowstone ecosystem was collapsing. And so from 1995 to 1996, thirty-one wolves were released back into the park with the hopes of restoring balance to this dying ecosystem (NPS, 2015). END_OF_DOCUMENT_TOKEN_TO_BE_REPLACED 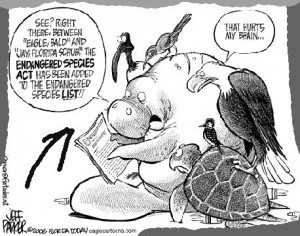 The Brown Pelican remains one of the most iconic marine, avian species. They are known for their large migrating flocks and their decline due to human encroachment. In 1903 a U.S National Wildlife Refuge was established to help increase populations off the coast of California.  The refuge proved futile when hunting and DDT (a pesticide) decreased their once abundant populations. DDT was used as an insecticide but contributed to the pelican’s endangerment via direct toxicity and impaired reproduction. In 1970, the Brown Pelican was red-listed as an endangered species. Rachel Carson’s book “Silent Spring” sent out a wave of hope that lead to the ban of DDT. This was a major win for the Brown Pelican population and led to its removal from the Endangered Species Act (ESA) in 2009. Once again thousands of Brown Pelicans could be seen soaring off the coasts of California and Mexico, in nesting colonies or migrating across the U.S. (Williams, 2014).

END_OF_DOCUMENT_TOKEN_TO_BE_REPLACED 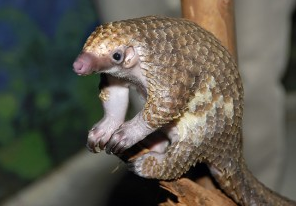 This is a Pangolin. This mammal is one of the most poached animal in the world.
Pangolin(Platt, J.R. Pangolin.)

He was bobbing his head back and forth, registering the new scents. His scales rose and fell slowly showing off his easy breathing pattern. As he slowly crawled out of his hut the photographer began to capture the images of one of the most trafficked animal in the world (Sutter, 2014). The sound of the click and the flash of the lights became worrisome for Sutter. He thought that this would startle the poor creature, yet it showed to have curiosity towards the camera. He began to sniff the lens and did not show any signs of fear. Phuong stated, with a smile on his face, “he is performing” (Sutter, 2014).

END_OF_DOCUMENT_TOKEN_TO_BE_REPLACED

Biodiversity within New England is a cornerstone of our regions identity. The beauty of our landscapes and wildlife inspire and enrich our lives. Although many may not readily appreciate it, biodiversity provides us with many of the things that sustain our lives. By maintaining a wide range of biodiversity, both humans and wildlife are offered a range of ecosystem services. Changes in biodiversity can influence the supply of ecosystem services and displace wildlife that depends on certain habitats. One threat facing biodiversity and wildlife within New England is the loss of early successional habitat. “Early successional habitats include weedy areas, grasslands, old fields or pastures, shrub thickets and young forest” (NRCS, 2010). END_OF_DOCUMENT_TOKEN_TO_BE_REPLACED 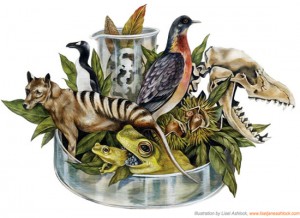 Jurassic Park, an island attraction full of resurrected dinosaurs, is often what comes to mind when we think of extinct species being brought back to life. This widely acclaimed tale evokes excitement and curiosity at the prospect of coming face-to-face with creatures long extinct, but viewers understand that the premise is fictional and that dinosaurs will never again roam the earth. Today, however, the prospect of reviving extinct species is no longer science fiction. Advancements in technology have now made de-extinction, the term used to describe the revival of extinct species back to living animals,  a scientific possibility. While current de-extinction projects are not looking to resurrect Tyrannosaurus rex, scientists are hoping to revive species they feel left the world too soon. De-extinction should not be taken lightly however, as the return of each species comes with its own set of obstacles and consequences. Instead, scientists interested in the de-extinction of a specific species should check each potential applicant against a defined system of evaluation that dictates whether or not the species is ripe for revival. These criteria will act as an insurance policy so that species will only be brought back if they can be successfully reintroduced and have limited negative impacts. With this system in place, de-extinction can be carefully used to bring back animals we had a hand in destroying, but that are ready for return.