Richard Conniff walked out his door one day only to notice an array of desiccated corpses, belonging to birds and small mammals, scattered about his walkway. Could all of these be “offerings” from his beloved cat, Lucky?  Unknowingly, Conniff was allowing his outdoor cat to be the perpetrator of up to 33 birds and dozens of mammal deaths yearly.  His desire to let a predator such as Lucky live a free-spirited lifestyle, had consequences beyond his realization. (Conniff, 2014)

Almost as if Karma had planned it, Lucky fell victim to the same fate that she had forced upon many others before.  One night, she and another neighborhood cat were attacked and killed by a wild animal. Conniff found the bloody remains of his companion the next morning and was devastated. Coincidently, a bobcat had jetted out in front of his car when leaving his neighborhood that same morning.  Surely, he thought, this must be the ruthless killer of the crimes the night before. (Conniff, 2014) END_OF_DOCUMENT_TOKEN_TO_BE_REPLACED

Trees are often seen as the strongest of plants, sort of permanent structures that dominate and decorate our landscapes.  But what if I told you that a small insect was changing that? Would you be skeptical, afraid or both? The hemlock woolly adelgid is an invasive insect running rampant through the Northeast, targeting the dominant canopy tree species of eastern and Canadian hemlocks. Landowners with this infestation on their property experience not only the great loss of these native New England canopy trees, but property damages and value declines when no management efforts are taken. But there is hope! With little time and money investments by private landowners, this infestation can be controlled before its too late to see our hemlocks in abundance again.   Figure 1 exemplifies just a portion of the vast loss of hemlocks in a Pennsylvania forest. 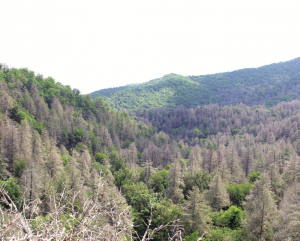 END_OF_DOCUMENT_TOKEN_TO_BE_REPLACED

The Emerald Ash Borer and Why its a Problem

Invasive species seem to be popping up everywhere in North America lately. From exotic plants choking out native vegetation in our forest, to zebra mussels clogging up pipes in our lakes and ponds. Invasive species of all types are on the rise and now it’s our job to try and prevent them from spreading, and possibly eradicate them from our native environments.

There is one invasive species in our region that has caused significant damage to our Ash tree species, Fraxinus Spp. The Emerald Ash Borer (EAB), Agrilus planipennis, is an invasive wood boring insect from Asia that infest and kill our native ash trees, let it be green, white, or black ash. EAB was first detected in Michigan in 2002. However it was suspected to arrived there in 1998 getting itself established in the environment for a few years before being noticed. Researchers believe EAB made its way to America via untreated ash wood like pallets used for stabilizing cargo in ships transporting heavy consumer goods from Asia. The ash wood pallets are usually treated with high heat or toxic fumes, but are suspected to have been mistreated in the case of EAB. Since 2002 EAB has established itself firmly in our forest, killing ash trees and has developed a range spanning from Canada to Georgia and from Colorado to New Hampshire. The pest is in nineteen different states and two Canadian provinces, and is now an international pest that seems to be making its mark with little sign of slowing down. END_OF_DOCUMENT_TOKEN_TO_BE_REPLACED