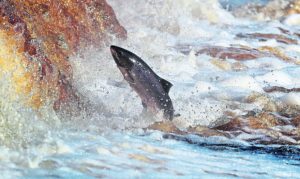 The Nez Perce people reside on the Snake River in North Central Idaho and still practice a hunter-gatherer way of life (Smith, 2018).  In 1855, The United States Government and five Native American tribes residing in Washington, Oregon, and Idaho signed the Treaty of Walla Walla (Smith, 2018)  Since the the original treaty, the Nez Perce Tribe has retained the right to fish, to hunt, and to graze livestock on unclaimed lands outside of the reservation (Smith, 2018).  Due to the addition of hydroelectric dams, beginning in the 1950’s on the Columbia and Snake Rivers, the Nez Perce Tribe has suffered a great loss of fishing resources from the effects of dams on the Salmon populations (Quirke, 2017).  Elliott Moffett, a 65 year old member of the Nez Perce Tribe, fights for Salmon in the lower Snake River (Quirke, 2017). “‘I like to say we are like the Salmon, we need clean, cold, swift running water. And they don’t have that because the dams have impounded their river,’” Moffett states (Quirke, 2017).  Moffett and his fellow activists at the Nimiipuu Protecting the Environment organization, have dedicated their lives to defending the environment and the Nez Perce rights (Support|Nimiipuu Protecting the Environment, 2018).  Every decision the tribe makes has “seven generations ahead” in mind and the scarcity of resources is making it harder and harder to teach future generations how to live off of the land (Support|Nimiipuu Protecting the Environment, 2018).