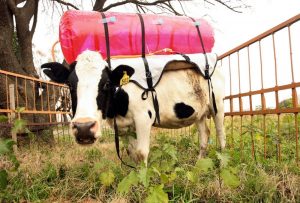 In a new effort to better quantify the methane emitted by livestock, researchers are utilizing methane-collecting backpacks on cows.

Most of us have the best intentions when making decisions at the grocery store – we often try to choose what is best for our health, and many of us have environmentalism in mind, as well. It can be difficult to know what is best, and all the contradictory information out there can leave us frustrated and confused. It seems that every few months there is a new set of rules for how we are supposed to eat: vegan, vegetarian, antibiotic-free, gluten-free, cage-free, GMO-free; and when it comes to beef, grass-fed is now all the rage. Unfortunately, if environmental sustainability is your motive, grass-fed beef actually does more harm than good. Ruminants such as cattle, sheep, and goats, are animals that are able to subsist on plant matter because they have a stomach compartment, the rumen, in which microorganisms digest these cellulose products. However, this form of digestion, known as enteric fermentation, comes at a cost. The microbial ecosystem of the rumen generates methane as a byproduct of this fermentation, in a process called ruminal methanogenesis (Lassey 2006). Methane (CH4) is a greenhouse gas, and is of critical importance because it has a global warming effect that is 28-36 times that of carbon dioxide (EPA). Nearly half of all human-caused methane emissions come from agriculture, and livestock contributes nearly 70% of CH4 emissions from the agricultural sector (Vergé et al. 2008, p.132; Lassey, 2006; Wysocka-Czubaszek 2018). In the context of the US specifically, methane accounts for 10% of our total greenhouse gas emissions, and 26% of these methane emissions comes from enteric fermentation – the second-highest portion next to natural gas and petroleum systems (EPA). While its concentration in the atmosphere is much lower than that of CO2, methane is 20 times more effective at trapping heat than carbon dioxide is, and has the potential to contribute 18% of the total expected global warming up to the year 2050, next to carbon dioxide’s 50%  (Milich, 1999). Thus, while CO2 tends to get the most public attention for its contributions to climate change, methane is a much more potent greenhouse gas, which calls for more significant consideration.

An average of 30 million animals per year are slaughtered for the beef industry in the US, and an average of 2 million animals, with an additional 3.4 billion pounds of beef, are imported to the US from Canada annually (ERS, 2015). In addition, about 9 million milk cows are active in the US in 2016 alone (statista.com). In all, approximately 20 billion pounds of beef is consumed in the US each year, accounting for approximately half of the American dietary carbon footprint (Waite, 2018). The amount of CH4 emissions from ruminants in 2016 was equivalent to 170 million metric tons of CO2 (Center for Sustainable Systems, 2018). To put these numbers into context, the effect of greenhouse gas emissions produced by annual US beef consumption is equivalent to that which would result from a car driving around the entire Earth 22,000 times (space.com; ewg.org). In response to the severity of methane output via enteric fermentation, the scientific community has become increasingly concerned with identifying resolutions that are considerate of productivity within the agricultural sector, as well as environmental efficiency.

Significant enteric methane production, and the overall increasing trend in GHG emissions by the beef and dairy industries, are symptomatic of a high demands for livestock products (Place, 2016). Many environmentalists and animal-rights activists advocate for a drastic decrease in or even total elimination of beef and dairy consumption in the American diet. Reduction in meat and dairy consumption is certainly linked to a lower personal environmental impact: the greenhouse gas emissions associated with the average meat-eater’s diet are about 1.5 to 2 times those of vegetarians and vegans, respectively (Scarborough, et al. 2014). But most people are resistant to altering their diet in such a radical way, due to a plethora of social and physical barriers; global demand for meat products is actually increasing at a rate faster than land availability can accommodate (Kwan, 2011; Jenkins, 2004; Verge, 2008). In fact, demand for beef and dairy products in the US is expected to increase 70% within the next 36 years (Place, 2016). Although veganism and vegetarianism can help reduce total greenhouse gas emissions, we simply cannot rely on everyone to adopt these lifestyles if we are to make significant changes with haste. In addition, campaigns to reduce meat consumption pose a threat to cattle farmers’ incomes. Harsh restrictions on the beef and dairy industries, or campaigns to reduce the consumption of these products across the nation and world, are both insufficient and would also pose a threat to those whose livelihoods depend on these industries. For these reasons, research teams including veterinarians, environmental specialists and other invested individuals, are collaborating to identify strategies for reducing ruminal methane emissions, without harming invested parties. To minimize the impact of ruminal methane emissions without negatively affecting animal welfare and the livelihoods of stakeholders, we propose the integration of dietary supplements into ruminal feed to naturally inhibit methanogenesis.

One of the most promising methods of reducing ruminal methanogenesis without posing a threat to the industry or the animals is through supplementation of the animals’ diets. Since feed efficiency and methane production are intrinsically linked, ruminants reared on cellulose-based diet, such as those destined to become the beloved “grass-fed” beef, will produce more methane, and for a longer time than they might otherwise, since the cellulose-based diet is not conducive to optimal growth of the animals (Tirado-Estrada et al., 2018). Experts in the field have acknowledged that completely altering the diet of every ruminant on earth is not feasible: grain-based diets can be costly and are often inaccessible (Tirado-Estrada et. al., 2018). It is possible and cost-effective, however, to improve the digestibility of the livestock diet by replacing some of the fiber content with protein-rich concentrates, while still utilizing the typical pasture-based diet. Increasing the digestibility of the diet of dairy and beef cattle can reduce methane emissions in two ways: first, by helping these cows reach market weight sooner, thereby limiting the amount of methane that each cow can produce throughout its life, and second, by inhibiting the process of methanogenesis in the rumen. Any compound with a high protein/low fiber content would be a fine contender for the improvement of the ruminal diet, but those that are naturally sourced, readily available and less costly are most ideal for the animals, the environment, and stakeholders. An excellent option which meets this criteria has been identified: mangosteen peel powder (MSP). Mangosteen peel powder, or Garcinia mangostana, is very highly regarded among animal nutritionists, because it does not negatively affect the crucial microbial populations of the rumen, but can reduce the population of methanogens, the microorganisms most responsible for methane production, by up to 50% in a safe manner (Polyorach et. al., 2016). The utilization of MSP in feed has been found to significantly reduce methane production between 10-25% (Wanapat et al. 2015; Manasri et al 2012; Polyorach et al. 2016). Aside from reducing the population of methanogens, protein-rich plant concentrates present in mangosteen peels, called saponins and tannins, have also been found to minimize the growth and activity of methane-producing protozoa in the rumen, without inhibiting their function entirely (Wallace et al, 2002, Patra 2011). Supplementing the diet with naturally derived plant compounds such as this effectively reduces methane production, and does so without causing significant consequences to the animal’s microbial system or putting the animal at risk for ruminal disease (Patra, 2010).

Dietary additives are already widely used to supplement cattle feed, which makes further supplementation feasible once high-protein supplements, like MSP, are made readily available in the national market. For example, Rumensin is a feed additive that has been used in the cattle industry for over 4 decades (Greenfield et al., 2000). The active ingredient in Rumensin is a coccidiostat, meaning that it is an antibiotic specifically geared at killing coccidiosis bacteria in the animal body. Rumensin is an attractive product because of its prevention and control of disease, as well as its capacity to improve feed efficiency by 4% (“Data on Dairy Science”, 2012). Because of the traction and popularity associated with this feed supplement, which improves productivity while also combating a severe public health crisis, there is potential for MSP to be utilized in a similar manner, with the intent to mitigate the impending public health crisis of climate change.

In anticipation of concerns among farmers and other food animal industry leaders that dietary supplementation would be too costly, it is important to emphasize that methane reduction and productivity are not mutually exclusive; in fact, quite the opposite is true. Dietary manipulation, as a means by which to decrease methane emissions, may also have the attractive quality of improving feed efficiency and animal productivity (Lovett et al., 2003). Protein rich, plant-based supplements are capable of improving milk production and composition, daily weight gain, and feed conversion efficiency (Khan et al., 2015). In other words, with the use of dietary supplements, animals can be brought to their goal weight more quickly while producing higher-quality meat. The inclusion of such methane-inhibiting concentrates has been found to correspond directly with more rapid animal development and increased body weight while potentially reducing enteric methane by up to 40% (Benchaar et. al., 2001, Lovett et al., 2003). The investment in dietary supplements may therefore ultimately result in money saved that would otherwise be spent on longer rearing times to get animals to their goal weight. The inclusion of protein-rich plant concentrates also has the potential to not only decrease enteric methane production but also increase the fat content in milk when included in the diets of dairy cows (Tirado-Estrada et. al., 2018). Integration of protein-dense supplements into the diet may be the most feasible option for increasing productivity while decreasing enteric methane production by dairy and beef cattle. For this reason, dietary supplementation of this sort is considered the most appealing and cost-effective option to motivate farmers to adopt more sustainable practices (Patra, 2010).

In order to effectively address

Waite, R. (2018). 2018 Will see high meat consumption in the U.S., but the American Diet is Shifting. World Resources Institute. Wri.org.