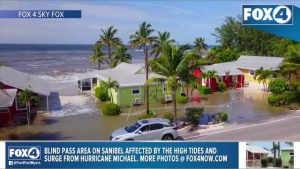 From Webster’s Dictionary, the word ‘claustrophobia’ is the fear of being enclosed in a small space or room and unable to escape or get out. Many people in the world suffer from this phobia, while others simply feel uncomfortable with the idea of being stuck in place. This is a feeling thousands of people have endured, especially in times of a natural disaster, faced with a rising storm surge and trying to escape. This is the fate many residents in hurricane prone areas, particularly the Gulf Coast and Florida have encountered. Unfortunately, a storm surge rises irrespective to one’s claustrophobia. Brendan Smialowski and Gianrigo Marletta interviewed Mexico beach resident Loren Beltran after the recent devastation Hurricane Michael caused. “My house, which is in Mexico Beach, is under water,” said Beltran, distraught after learning that water had reached the ceiling of her damaged home (Smialowski, B et al. 2018, October 11). Climate change is progressing, and factors like storm surge, sea level rise, and sea surface temperature (SST) increase are causing high intensity hurricanes to happen at a higher rate. This has led to more much more flood damage in coastal communities.  The only viable solution to better protect the homes of residents living in coastal areas is building with flood proof materials and methods, such as concrete foundations, to ensure minimal damage possible from the hurricane. END_OF_DOCUMENT_TOKEN_TO_BE_REPLACED