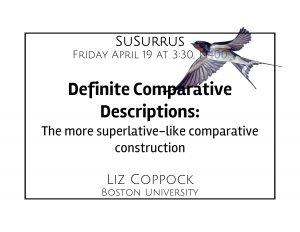 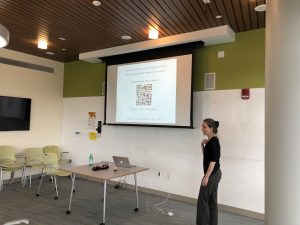 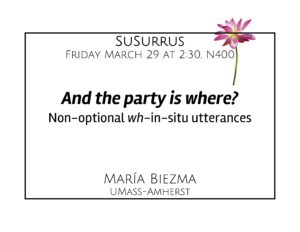 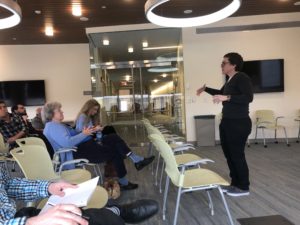 And the party is where?: Non-optional wh-in-situ utterances

Vincent: María is giving a talk this Friday.

Rajesh: And the party is where?

Inquisitive (non-echo) utterances with a non-fronted wh-word, WhDecs (e.g. and the party is where?) have not received much attention in the literature. WhDecs present an interesting theoretical puzzle: syntactically they look like declaratives but still have an inquisitive interpretation, and, in terms of meaning, they are not interchangeable with (canonical) wh-interrogatives (WhQs). While there have been some attempts to characterize them in the literature (see e.g. Ginzburg & Sag 2001, Pires & Taylor 2007), these refer to a subset of the data or are not centered on WhDecs. In this talk I use WhDecs as a window to explore how taking into account the interaction between semantics and discourse structure, as well as the dynamic update triggered by utterances, we can derive subtle interpretational differences while keeping the overall interpretation true to form. If time allows it, we will explore the consequences of the analysis for theories of the interpretation of prosodic nuclear contours in inquisitive utterances. 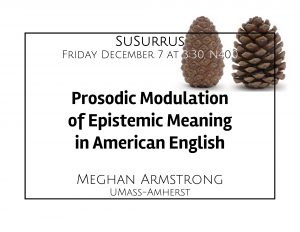 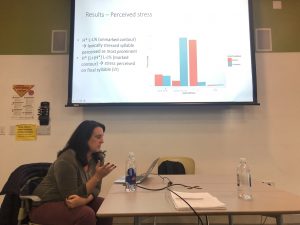 Pierrehumbert & Hirschberg’s (1990) pioneering work on intonational meaning argues that choices in tonal targets are made based on the extent to which propositional content is mutually believed in the discourse. Thus through intonation, S(peaker) can indicate information about the shared belief space with H(earer). However, intonation may also work together with epistemic modality to influence H’s perception of S’s belief state (Gravano et al., 2008). Many varieties of American English allow for an apparent stress shift (e.g. probably → probabLY, might have been → might have BEEN) that is uttered with a L+¡H*L-L% nuclear configuration in specific discourse contexts. Drawing from experimental results, we argue that this is a highly restricted phenomenon that depends on specific semantic, lexical and dialogical requirements. The prosodic pattern seems to only be felicitous for mid scalar epistemic items under dialogic conditions (i.e. it cannot be used for out-of-the-blue utterances). We also contend that S essentially gives H credit for a given proposition, in line with Escandell-Vidal’s notion of “other-attributed thoughts” (1998). Implications for the study of intonational meaning are discussed. 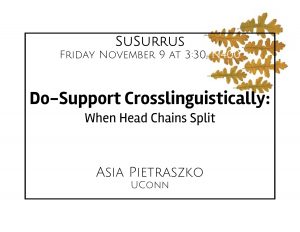 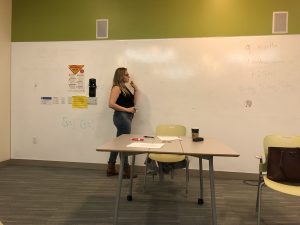 Existent analyses of do-support share one basic feature: do is required by a particular head (typically T) due to some special requirement of that head (e.g. its affixal nature). We argue that this characterization of do-support is incorrect and instead propose that do-support arises as spellout of lexical verb chains when their integrity is disrupted. The analysis correctly predicts that do can surface in a variety of positions and is not due to failure to satisfy affixal properties of a particular head. 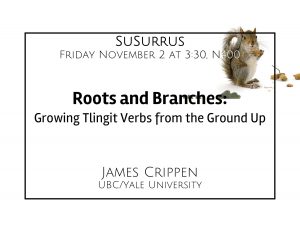 Roots and Branches: Growing Tlingit Verbs from the Ground Up

The traditional approach to analyzing verbs in Tlingit and related Na-Dene (Dene–Eyak Tlingit) languages is to represent each paradigmatic morpheme of the verb with a position class (‘slot’) in a template that accounts for linear order. In this presentation I describe a derivational syntactic approach to the Tlingit verb where all morphemes are distinct syntactic terminals and the structure is built by successive Merge operations. The resulting AspP is spelled out by a regular mapping of syntactic terminals to phonological domains, resulting in a large word sometimes accompanied by a few proclitics. 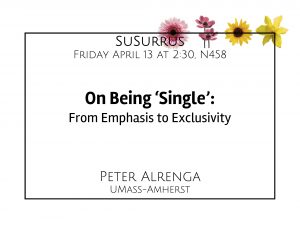 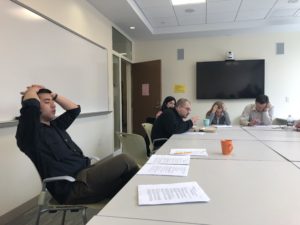 On Being ‘Single’: From Emphasis to Exclusivity

A well-known feature of the modifier ‘single’ is that it gives rise to two sorts of interpretations when it occurs in an indefinite noun phrase. In simple affirmative sentences, ‘single’ semantically conveys “no more than one”, and thus patterns with other exclusive modifiers in producing upper-bounded truth conditions. In NPI-licensing environments, ‘single’ fails to trigger such an inference, and instead has a purely emphatic effect. In these environments, ‘single’ patterns with scalar minimizers.

While uses of ‘single’ as in (2) have figured in the NPI literature, little attention has been paid to the use of ‘single’ in positive contexts, much less to the relation between the two uses illustrated in (1) and (2). In the first part of this talk, I develop a unified approach to these uses, one which takes their emphatic character as its starting point. In line with much recent work on NPIs, I account for this shared property via ‘single’’s mandatory association with the silent operator EVEN. This assumption derives its behavior in negative sentences like (2) straightaways. I further show that in positive sentences like (1), the semantic upper-bounding that ‘single’ produces can also be made to follow from its mandatory association with EVEN. In the second part of the talk, I consider some of the implications of this analysis for our understanding of scalar minimizers and exclusive modifiers more generally. 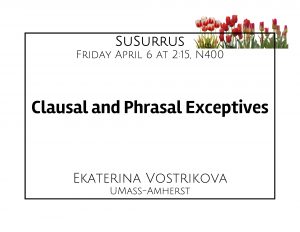 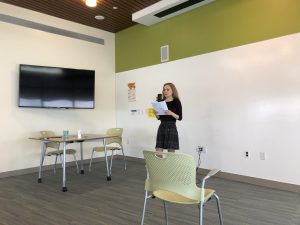 Exceptive constructions in English, like (1), come with the following inferences: John is a boy and he did not come, every other boy came (Horn 1989, von Fintel 1994).

(1) Every boy except John came.

(2) The distribution puzzle: *Some boy(s) except John came

Von Fintel’s (1994) theory of exceptives straightforwardly accounts for all of these facts. According to this theory, “except” introduces a set ({John} in (1)) that it subtracts from the domain of a quantifier and adds the minimality condition: this is the minimal set that has to be subtracted in order for the quantificational claim to be true.

However, it has been argued in the literature that complements of some exceptive markers are reduced clauses (Garcia Alvarez 2008, Pérez-Jiménez & Moreno-Quibén 2012 on Spanish, Soltan 2016 on Arabic) and thus do not introduce a set of individuals.

In this talk I will show how von Fintel’s semantics for exceptives can be extended to clausal exceptives. 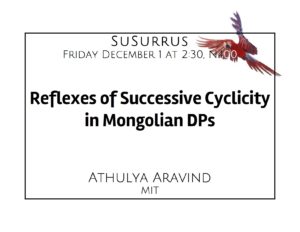 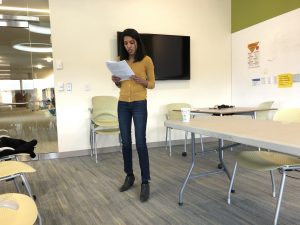 It is commonly assumed that (at least) CP, vP, and DP constitute phases and require movement out of them to proceed through their edge. But while there is a growing body of evidence that long-distance movement stops off at the edge of each intervening CP and vP, comparable reflexes of successive cyclicity seems to be absent from DP, raising the possibility that there are fundamental differences within phasal domains in the availability of edge-positions and intermediate movement.

In this talk, I discuss data from Mongolian (Mongolic) showing that at least some DPs display successive cyclicity effects. More specifically, I show that movement out of nominalizations in Mongolian must take place via the highest peripheral position, Spec, DP. Evidence comes a pattern of interactions between long-distance movement and other operations (case, anaphor binding) that compete for the edge. More broadly, these results lend support to a view on which phases, irrespective of category, are parallel domains wrt locality and successive cyclicity and can in principle provide escape hatches for movement out of them. 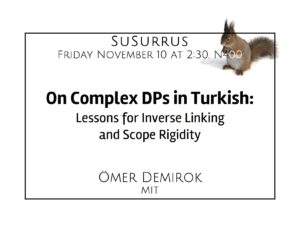 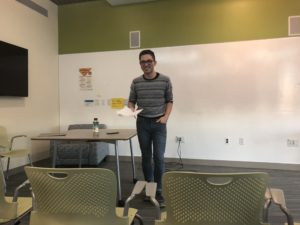 On Complex DPs in Turkish: Lessons for Inverse Linking and Scope Rigidity

‘Inverse Linking’ cases (May, 1977) like in (1) where a QP can have scope over the QP that embeds it were originally assumed to involve QR of the embedded QP outside the DP that contains it. Later work, however, argued that DP is a scope island and QR, in this case, involves adjunction to DP (May 1985, Heim and Kratzer 1998, a.o.). More recently, Sauerland (2005) presented arguments in favor of the view that that QR out of DP is possible and hence DP is not a scope island, which were subsequently challenged in Charlow (2010).

In this talk, with the hope of shedding some light on the phenomenon from the perspective of a language where QR seems to be detectable at PF, I will investigate the scope interactions in complex DPs in Turkish, which raise the same questions that inverse linking cases like in (1) raise. The cases I will focus on involve quantified DPs that contain a Relative Clause, whose ‘edge argument’ will be shown to be local enough to QR. I will argue that the relevant Turkish data favor the idea that DP is not a scope island and QR out of a DP is possible (while still being locally bound). An additional consequence of this investigation will be that we need Scope Rigidity (in Turkish) to make reference to the PF-visibility of QR, rather than the relative linear order of scope-bearing elements within a domain. 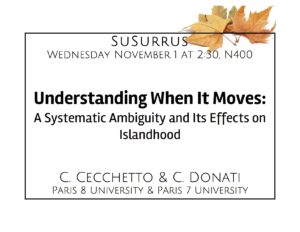 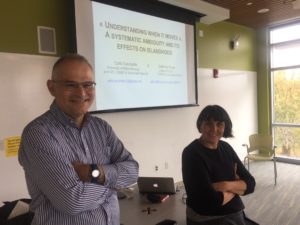 “Understanding When It Moves”: A Systematic Ambiguity and Its Effects on Islandhood

In this talk we will explain the systematic ambiguity of bare wh-structures (I went where you told me to go /  I wonder where you told me to go) as a labeling conflict, extending our previous approach to free relatives. We argue that our analysis can explain why the ambiguity of wh structures correlates with their islandhood status, namely the fact that the structure is a strong island only when the wh-word provides the label. Finally, we extend this approach to the odd one out among wh-words, namely ‘why’ and its counterpart in languages like Italian where ‘why’ and ‘because’ are translated by the same word. 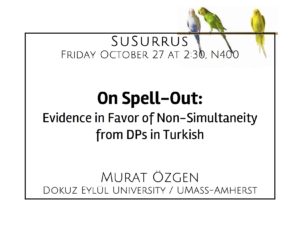 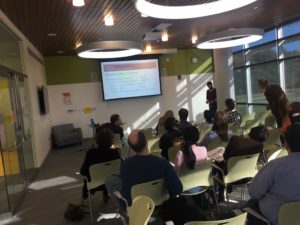 On Spell-Out: Evidence in Favor of Non-Simultaneity from DPs in Turkish

As put by Chomsky (1995 and subsequent studies), The Minimalist program maintains that the derivations and representations constituting linguistic competence conform to an ‘economy’ criterion. Therefore, language is the most optimal solution to the computational system, which formalists call grammar, to the constraints imposed by two interfaces. These interfaces are the articulatory-perceptual system and the conceptual-intentional system. Articulatory-perceptual system is known briefly as PF, while conceptual-intentional system is known as LF. These interfaces posit that sentences are derivated, produced, and stored. The assumption that the sentences are processed and stored in short-term memory leads us to the conclusion that there can be operational limitations on syntactic grounds. Chomsky (2000 & 2001) argues that there is a radical movement from Extended Standard Theory as well as Government and Binding Theory. Recent studies forward the idea of Multiple Spell-Out, which suggests that a derivation is composed of incremental computations called phases. A phase is a unit of syntactic computation that converges at <PF, LF>. The key point here is that a phase must be legible at both interfaces, which suggests the idea that phases can be isolated at <PF, LF>. Therefore, a phrase such as PhP should display interface properties. Relevant literature on the phasehood a PhP puts forwards a number of tests which can display the interface properties of such phrases. Common phasal phrases are known to be v*P (Chomsky 2000 and subsequent studies), CP (Chomsky 2000 and subsequent studies), DP/nP (Chomsky 2007, Hiraiwa 2005, Marantz 2007, Ott 2008, and Svenonius 2004), and pP (Abels 2003, Raposo 2002, Svenonius 2003, and van Riemsdijk 1978). Given that phases have natural interface correlates, we might state the following PF & LF correlates:

The phasehood of such phrases in Turkish has not been widely analyzed yet. In this study, I aim to explore the phasehood of DPs in Turkish since these phrases are still on debate within the literature. I will show that the phasehood diagnostics on DPs in Turkish yields contradictory results in that they are convergent by PF, whereas they are not phases in terms of LF diagnostics. This problem suggests a dichotomy between simultaneous spell-out (Chomsky 2008), and non-simultaneous spell-out (Felser 2004, Marusàicà 2006) phenomena.

The Dynamics of Lying and Fiction