Fund for Teachers Fellow (2021) Brittanee Rolle, a 12th grade English teacher at Butler College Prep (of Noble Network of Charter Schools) on the South Side of Chicago, IL, spent time at the Center for the Study of African American Language (CSAAL) in June. According to the mission statement, Fund for Teachers strengthens instruction by investing in outstanding teachers’ self- determined professional growth and development in order to support student success, enrich their own practice, and strengthen their schools and communities. Ms. Rolle received a grant to learn about ways in which professors, museums, and classroom teachers have developed strategies to embrace and explore African American English (AAE) while teaching Standard American English. Her philosophy of education is to not demand that children of color give up what they are to become something else, yet to give them the tools to demand the world to make room for them. During her time at CSAAL, Ms. Rolle engaged in discussions about linguistic approaches to the study of AAE, and she explored ways linguistic descriptions of AAE could be useful in classroom practice, especially in projects, lessons, and instruction in literature. During her visit, Ms. Rolle met with three CSAAL research assistants and linguistics majors, Dan DeGenaro, Samuel Lederer, and Chloe Ostiguy, via Zoom to hear about some of the child and adult AAE data they have been analyzing. Ms. Rolle also attended a session with Professor Kristine Yu (Linguistics), who talked about a current sounds project on the tense/aspect marker BIN in AAE and introduced some apps and software that can be used in classrooms to project visual illustrations of differences in pitch patterns and contours that might be associated with different constructions.

Founded in 2006, CSAAL in Humanities and Fine Arts is a center of excellence in research on the various dimensions of African American language and a resource for communities across the country, with a commitment to furnishing information and training to teachers and other professionals who address issues of language and dialect used by children in school and pre-school environments.

Tom Roeper will provide an online talk to a society of Brazilian educators on language in the classroom.  Anyone interested can connect to this talk at Youtube bit.ly/3n1YCfa. That the talk will be at 5:00 PM east coast time on December 3rd.

The full conference schedule is here. The conference will feature keynote presentations from Michael Frank and Adele Goldberg. In addition, a number of UMass students, alumni, professors and LARC members are presenting work there, including:

The first South Asian Forum on the Acquisition and processing of Language (SAFAL-1) was held virtually at the University of Potsdam from 8/31 – 9/2. It was a satellite workshop to AMLaP 2020, and it was a workshop that ‘aims to provide a platform to exchange research on sentence processing, verbal semantics, computational modeling, corpus-based psycholinguistics, neurobiology of language, and child language acquisition, among others, in the context of the subcontinent’s linguistic landscape.’ Like AMLaP, it was free to attend: The schedule is here.

UMass linguists and psycholinguists were well represented among the speakers at the workshop, including…

Rajesh Bhatt gave a keynote talk on Wednesday 9/2 at 9:00AM Eastern time

Sudha Arunachalam, Sakshi Bhatia, and Kamal Choudhary lead a roundtable panel discussion to close the conference on Wednesday 9/2, at 11:45AM eastern time.

We first explore the challenge of enriching the concept of interfaces between syntax, semantics and pragmatics: it is largely fixed, innate and governed by simpliciity (economy). Variation lies within modules, not across them. Then we argue: Grammar can provide notations for thought, (Chomsky (2014)) for instance, through an extension of X-bar theory to mathematics which demonstrates what a unifying notation for Cognitive Science can look like. The formalism of Generative grammar may also carry implications for political ideology and our view of personal integrity.

We argue that the acquisition path and actual acquisition evidence is the strongest source of insight for deep principles. Topics will include (briefly): ellipsis, quantification, wh-movement, recursion, Speech Acts, and the ingredients of False Belief reasoning. The experiments lead to specific suggestions for how linguistic theory can make the leap into the classroom, and inform our approach to multilingualism. dialects and language disorders.

Annika Andersson, Associate Professor at Linnaeus University, will present “Cross-linguistic influence on processing of fine-grained placement verb semantics as recorded by ERPs and appropriateness ratings” and talk about some of her research with second language learners on Wednesday March 18th 12:00 in ILC N400. An Abstract follows.
Abstract
Second language (L2) learners typically experience challenges when semantics differ across source and target languages, and often display CLI in speech production and behavioral comprehension studies (e.g., Jarvis & Pavlenko, 2008). However, in studies using ERPs, CLI has rarely been reported, probably because these studies typically examine the processing of gross semantic violations (e.g., Kutas & Hillyard, 1980). We explored how English and German learners of Swedish process fine-grained L2 verb semantics that are either shared or not shared with their first language. Three Swedish placement verbs (sätta ‘set’, ställa ‘stand’, lägga ‘lay’), obligatory for describing placement on a surface with support from below (Viberg 1998) were examined. In difference to Swedish, English has one general placement verb (put), whereas German has specific verbs similar to Swedish (Narasimhan et al., 2012). In contrast to previous ERP studies of semantic processing qualitative differences in semantic processing were related to non-native processing. However, more interestingly neurophysiological processing of fine-grained semantics was strongly related to CLI both offline and online.

Tom Roeper delivered a talk on “Multiple Grammars and Minimal Interfaces” at University of Illinois, Chicago Circle, on January 24th.

There is a particularly lively and sophisticated group of scholars studying Information Structure and Syntax in L2 and code-switching under the leadership of Luiz Lopez.

Anne-Michelle Tessier, University of British Columbia, will present “Learning morpho-phonology with Gradient Symbolic Representations: Stages and errors in the acquisition of French liaison” at 2:30pm Tuesday February 18 2020, in N458. Abstract

Things will turn decidedly more festive at 3:15, when we will celebrate Anne-Michelle’s book “Phonological Acquisition: Child Language and Constraint-Based Grammar“. Light refreshments will be served, to be followed by dinner at Michael Becker’s house. 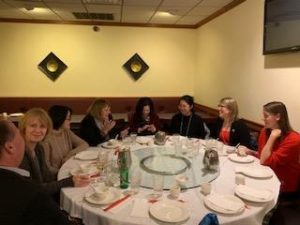 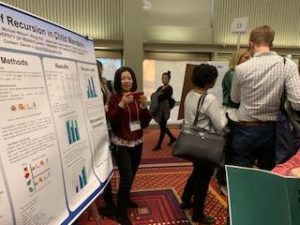