Volodja and I have been in Israel and Russia the past 2 ½ weeks, mostly visiting friends and family, but with a couple of academic activities. On September 24, we participated in the 7th Annual Bar-Ilan Semantics Workshop, organized by Susan Rothstein, where I gave a talk, “Lexical Semantics in Formal Semantics: History and Challenges”, a slightly edited version of my 2016 Bolzano ESSLLI workshop talk. Other participants were Keren Khrizman, Fred Landman and Aviv Schoenberg, Hana Filip, Maria Gepner, and Susan Rothstein.

And on October 4 in Moscow at the Higher School of Economics, in a formal semantics class taught by Natasha Ivlieva and Alexander Podobryaev, I gave a guest lecture: Part 1: Noun Phrases and Quantification. Part 2: Weak Noun Phrases and Existential Sentences. That last was very nostalgic, because their class is in many 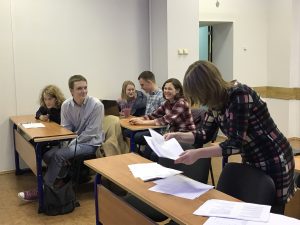 ways a continuation of the introduction to formal semantics classes that I taught in Moscow every year from 1996 to 2014. The students seemed to be very good and very interested. I’m happy that formal semantics is thriving in Moscow.