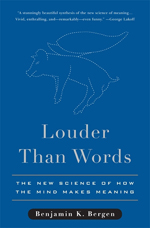 “Imagine that you are a participant in the following psycholinguistic experiment. You are seated in front of a computer terminal and shown the sentence The carpenter hammered the nail into the wall. After reading the sentence, you are shown a picture of an object, such as a nail or elephant, and asked to quickly judge whether that object was mentioned in the sentence. Of course, you would quickly say ‘yes’ to the picture of a nail and ‘no’ to the elephant. The primary interest, however, is in your speeded response to the nail picture, depending on whether it was shown in a horizontal or vertical orientation. Research indicates that people, on average, are faster to make their ‘yes’ decisions when the picture was in the same spatial orientation as implied by the sentence just read … Thus, people are faster to say ‘yes’ when the picture showed the nail in the horizontal orientation than when it was shown upright, or in the vertical position. However, when they first read the sentence The carpenter hammered the nail into the floor, people are faster, on average, to say ‘yes’ to the nail picture that presented it in a vertical position rather than horizontal. One interpretation of these findings is that people automatically construct a mental image of an object in its appropriate spatial orientation based on what the sentence implies. Even if the nail’s position is not explicitly noted in the sentence, our immediate understanding of the sentence’s meaning enables us to create an image of the situation in which the nail was hammered in a horizontal or vertical position. How people construe imaginative understandings of language is the subject of Ben Bergen’s book.” Source: Raymond Gibbs in Language, June 2014.

“This is an encyclopedic dictionary of close to 400 important philosophical, literary, and political terms and concepts that defy easy–or any–translation from one language and culture to another. … The entries, written by more than 150 distinguished scholars, describe the origins and meanings of each term, the history and context of its usage, its translations into other languages, and its use in notable texts. The dictionary also includes essays on the special characteristics of particular languages–English, French, German, Greek, Italian, Portuguese, Russian, and Spanish.”

Connections: Quine’s thesis of the Indeterminacy of Translation, via the Stanford Encyclopedia of Philosophy.

Richard Evans in the Guardian

Counterfactuals “are often claimed to open up the past by demonstrating the myriad possibilities, thus freeing history from the straitjacket of determinism and restoring agency to the people. But in fact they imprison the past in an even tighter web: one tiny change in the timeline – Archduke Franz Ferdinand escapes assassination in Sarajevo, the British cabinet decides not to enter the war – leads inevitably to a whole series of much larger changes, sometimes stretching over decades almost up to the present day. Yet this ignores, of course, an infinite number of chances that might have deflected the predicted course of events along the way – Franz Ferdinand might have fallen victim to another assassin’s bullet, or died in a hunting accident; Britain might have entered the war later on; the US might have come into the conflict on the side of the French; Austria-Hungary might have collapsed in the face of nationalist revolts; and so on.”

A book about 20 languages that are spoken by students in German classrooms, including Turkish, Arabic, Polish, Hindi, Japanese, Italian, and English. The book is meant to help teachers understand the properties of their students’ native languages and provides materials for classroom use. The authors are prominent linguists, but the book is for the general public. The idea was conceived by the semanticist Manfred Krifka from the Humboldt University in Berlin.

The book is in German and for German classrooms, but we should all work together to produce such a book for the US, too.

A festschrift for Dorothy Edgington is in the making. It’s not a secret: Conditionals, Probability, and Paradox: Themes from the Philosophy of Dorothy Edgington. Lee Walters and John Hawthorne (eds), OUP.

Here is my contribution to the volume: Chasing Hook. Quantified Indicative Conditionals. Here is Sabine Iatridou’s contribution. And here is Edgington’s chapter on conditionals in the Stanford Encyclopedia of Philosophy.

Gennaro Chierchia: “I spent my intellectual life studying how meaning takes shape in language. A common thread in my work is the idea/claim/speculation that a logic (a way of drawing inferences) spontaneously grows and latches on to the syntactic structures produced by our capacity for recursive computation. This ‘natural logic’ gives a special power to our ability to use language to communicate and refer, a power not found in other species.” 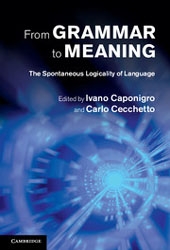 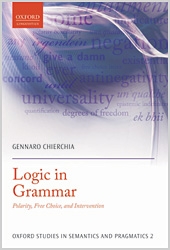 A festschrift for Jeroen Groenendijk, Martin Stokhof, and Frank Veltman. 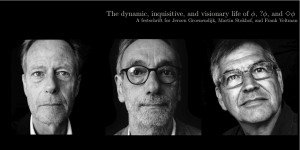 Johan van Benthem: Suave radicals. “While the inner sanctum of the Montague system are eternal homomorphisms between the algebras of natural and formal languages, GSV started looking at the dynamic agency behind natural language, as was also done by Lewis, Stalnaker and Kamp, but quickly developing one seminal new theme after another in their own distinctive style at the interface of semantics and pragmatics. One of these themes is the nature of information, perhaps the main currency created and conveyed by natural language. Look at the data semantics of Veltman, or the early work of Groenendijk & Stokhof with van Emde Boas on knowledge, and you will see how this played around 1980. The other main theme, forming a natural unity with the first, is communication between language users, which eventually led to dynamic semantics of the 1980s and 1990s, with classics such as Dynamic Predicate Logic and Defaults in Update Semantics where the potential for changing hearer information is at the heart of the meaning of linguistic expressions. These ideas were developed by paying close attention to carefully selected facts from natural language, concerning anaphora, questions, and conditionals, the way expert geologists detect the presence of gold seams by looking at small, but telling facts of rock coloring or vegetation. In doing all this, GSV achieved something that is rare for academics: they set the international agenda of research of their field, instead of following it.” 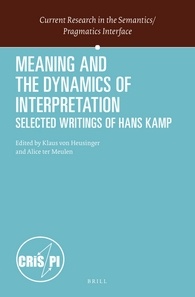 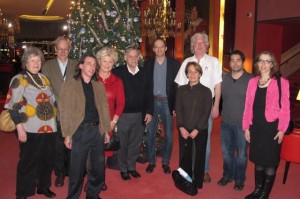 From interview with Alice ter Meulen: “The lack of mutual interest between Chomsky and Montague – to the extent that there was any perception of the other’s achievements, it seems to have been largely negative – may seem strange in one way, since they were motivated by the same deep insight and concern: that natural languages, for reasons that we now find commonplace, but that weren’t at the time, were subject to far greater systematicity than had been assumed until then or at least than anyone had been prepared to openly assert. The relation between form and meaning, they both saw clearly and posited emphatically, had to be essentially lawlike, and for natural languages this had to be in some important sense by ‘design’ – just as for formal languages, even if the designing and the designers were different.”