From Science News, August 10, 2017: “More than 300 years ago, the philosopher René Descartes asked a disturbing question: If our senses can’t always be trusted, how can we separate illusion from reality? We’re able to do so, a new study suggests, because our brain keeps tabs on reality by constantly questioning its own past expectations and beliefs. Hallucinations occur when this internal fact-checking fails, a finding that could point toward better treatments for schizophrenia and other psychiatric disorders.”

How do natural languages distinguish between fact and fiction? They don’t really. But they provide many tools for reality checking. I probed into this topic in my 2015 contribution to the Rome Science Festival. Here is the abstract for the talk: “Languages do not care all that much about the difference between fact and fiction. Stories tend to be told as if they were reports of known fact. You may have read somewhere that Mr. Palomar was standing on the shore, looking at a wave. Was it in a newspaper? Well, no, it’s from a story by Calvino. [Il signor Palomar è in piedi sulla riva e guarda un’onda.] Calvino’s story doesn’t tell you that it is a piece of fiction. There are no grammatical categories to indicate the merely fictional. There are no fictional declensions or conjugations in natural languages. Every sentence in every language describes a wide range of possibilities. When Calvino writes that Mr. Palomar was standing on the shore, he evokes a set of possibilities. When Wikipedia tells me that Calvino was born in Cuba, it, too, evokes a set of possibilities. But it does more. It also implies that the world we live in is one of them. When it comes to how to approach reality, languages do care. They have countless ways to modulate, fine-tune, and calibrate claims about reality. In a quarter of all the world’s languages, you can’t say that a man was standing on the shore without mentioning your evidence. Was it just hearsay? Did you see it with your own eyes? Did you infer the man’s presence from the footprints in the sand? In those languages, grammar forces speakers to be upfront about their evidence, just as Italian or English forces us to use tenses to locate events in time. Once the evidence is on the table, we may want to say something about the strength of the conclusions we can draw from it. Might there be an iguana in the reptile house? Is it certain? Or is there only a slim chance? Is there a better chance for there to be an iguana than a python? What means do languages have to indicate the strength of a conclusion from a piece of evidence? How do they compare possibilities? How do they talk about degrees of possibilities? Most importantly, how does grammar dip into this jungle of concepts and map them onto hierarchically structured sequences of words that we can use to reason about uncertainty in science and in daily life?” 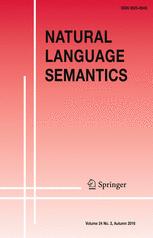 The latest issue of Natural Language Semantics has two Open Access articles. Ivano Ciardelli and Floris Roelofsen’s paper is about so-called Hurford disjunctions, that is, disjunctions where one disjunct entails another. More generally, it is a contribution to Alternative and Inquisitive Semantics, where disjunction is assumed to generate multiple propositional alternatives. Alexandre Cremers and Emmanuel Chemla’s article is an experimental study on questions embedded under emotive factives. Emotive-factive predicates like surprise or be happy present empirical and theoretical puzzles for embedded questions: Although they embed wh-questions, they can’t seem to embed whether-questions, for example.