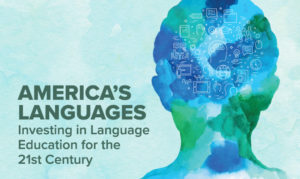 The 2017 Report on America’s Languages by the American Academy of Arts and Sciences is silent about non-standard varieties of American English, in particular African American English (AAE). Also, sign languages are only mentioned very briefly. There is no discussion of American Sign Language (ASL) in the body of the report apart from an initial statement (on p.1), which affirms that ASL is a language. The demonstration that sign languages (like ASL) and non-standard vernaculars (like AAE) are legitimate and fully systematic languages might be among the most important achievements of modern linguistics.

The report was written as a response to questions by a bipartisan group of members of Congress: “How does language learning influence economic growth, cultural diplomacy, the productivity of future generations, and the fulfillment of all Americans? What actions should the nation take to ensure excellence in all languages as well as international education and research, including how we may more effectively use current resources to advance language attainment?”

The way the report is organized suggests that different members of the team of authors responsible for this report might have had different ideas about what their congressional charge was. Parts of the report suggest that this is a report about foreign language teaching in the US, in particular the teaching of big ‘world’ languages like Spanish, French, German, Russian, Chinese, Japanese, Arabic, Hindi, etc. That’s not what the title of the report suggests, though, or the attention given to the preservation and revitalization of Native American languages and heritage languages. If this is a report about America’s languages, then AAE or ASL cannot be excluded.

One of the key findings of the report is that “the United States needs more people to speak languages other than English in order to provide social and legal services for a changing population.” Recent work by Sharese King and John Rickford on the testimony of Rachel Jeantel made clear that knowledge of AAE may also be needed to provide adequate social and legal services. Another key finding of the report is that mastery of a second language might have a variety of cognitive benefits. Here, too, it would be important to recognize that a speaker of both African American English and Standard American English might be as bilingual as someone who masters both Dutch and German.