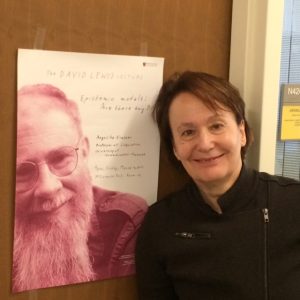 I feel so honored and happy to be giving the 2017 David Lewis Lecture in Princeton. David Lewis was the most important influence on me as I was mapping out the path I wanted to take as a linguist and semanticist. Mysteriously, the handwriting on the poster is Lewis’s very own handwriting.

David Lewis’s General Semantics (Synthese 22, 1970) was the work that turned me into a semanticist. I was introduced to the article in a Konstanz seminar with Yehoshua Bar-Hillel. I still consider General Semantics the most important milestone in the history of formal semantics for natural languages. In that paper, Lewis teaches us how to connect formal semantics to Chomsky’s Aspects model, for example: “I have foremost in mind a sort of simplified Aspects-model grammar (Chomsky, 1965), but I have said nothing to eliminate various alternatives.” Lewis shows how an insightful theory of semantics and pragmatics can be brought together with an explanatory theory of syntax of the kind Chomsky pioneered. General Semantics is, I believe, the first work that presents a compositional theory of meaning that unifies the perspectives of generative syntax with those of formal logic and analytic philosophy. I think David Lewis’s work was a factor in putting an end to the ‘Linguistics Wars’. It made clear that formal semantics (and pragmatics) and syntactic theory in the spirit of Chomsky could travel together peacefully.

Lewis’s Adverbs of Quantification was a major inspiration for Irene Heim’s and my dissertations. It is the source of the idea that indefinites introduce variables that can be unselectively bound by independent sentential operators and contains the seeds of the restrictor view of if-clauses. Current pragmatic theory would not be what it is today without Convention and Scorekeeping in a Language Game: Contemporary game-theoretical pragmatics, theories of presupposition accommodation, the idea of scoreboards keeping track of salient features of discourse, and context-dependent theories of relative modality all have their roots in those two works. What made Lewis’s ideas so powerful was that they were launched in beautiful prose and with minimal technical machinery. This is why they could so easily cross disciplinary borders.