“Beth Stevens is a neuroscientist whose research on microglial cells is prompting a significant shift in thinking about neuron communication in the healthy brain and the origins of adult neurological diseases. Until recently, it was believed that the primary function of microglia was immunological; they protected the brain by reducing inflammation and removing foreign bodies.

Stevens identified an additional, yet critical, role: the microglia are responsible for the “pruning” or removal of synaptic cells during brain development. Synapses form the connections, or means of communication, between nerve cells, and these pathways are the basis for all functions or jobs the brain performs. Using a novel model system that allows direct visualization of synapse pruning at various stages of brain development, Stevens demonstrated that the microglia’s pruning depends on the level of activity of neural pathways. She identified immune proteins called complement that “tag” (or bind) excess synapses with an “eat me” signal in the healthy developing brain. Through a process of phagocytosis, the microglia engulf or “eat” the synapses identified for elimination. This pruning optimizes the brain’s synaptic arrangements, ensuring that it has the most efficient wiring.” 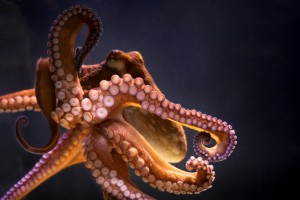 From USC News: “A linguist and a marine biologist at the USC Dornsife College of Letters, Arts and Sciences began an unlikely project two years ago to compare the movement of the human tongue with the manipulation of the arms of the octopus and the undulation of a small worm known as C. elegans. …

Titled “Dynamical Principles of Animal Movement,” the project is supported by the National Science Foundation. Its principal investigators at USC Dornsife are Khalil Iskarous, assistant professor of linguistics, and Andrew Gracey, associate professor of biological sciences.

As a linguist, Iskarous hopes the research will help explain how movements of the human tongue are compromised by Parkinson’s disease, but he said the NSF research is aimed at broader questions of motor control.”