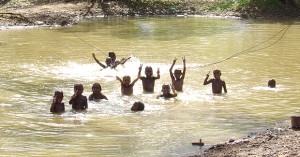 “Light Warlpiri is a newly-evolved language spoken by about 300 people in the Lajamanu Aboriginal community, located at the edge of the Tanami Desert, about 890 km south of Darwin. The language combines elements of English, Kriol (an English-based creole that emerged in the late nineteenth-century) and Warlpiri, an endangered traditional language that is spoken in central Australia by about 4000 people. The Australian linguist Dr Carmel O’Shannessy, who speaks Warlpiri, discovered the existence of Light Warlpiri while working as a teacher and linguist at Lajamanu in the late 1990s. In a paper published this month in the journal Language, Carmel documents for the first time the grammatical structure of the language and discusses the social context that led to its emergence.”

How could a group of children ‘agree’ on a language that is different from that spoken by the adults around them? In his work on conventions, the philosopher David Lewis developed an analysis of tacit agreements of this kind that was inspired by the economist Thomas Schelling.