In reflecting on my time in Portugal, I have realized something culturally different between this city and the other cities we visited. Portugal was by far the hardest city to eat in with dietary restrictions and preferences. Coming into this trip I knew that being vegetarian would put me at a disadvantage. European food culture puts a large emphasis on fresh meats and fish, so I figured I would have a much more difficult time finding options to eat in each of the countries. However, I was pleasantly surprised to find that London, Paris, and Verona were all incredibly accommodating to not only my dietary preference of being vegetarian, but also my friends’ restrictions with gluten, nuts, and shellfish. Each city was similar to the US in their approaches. When going out to eat, restaurants had breakdowns of allergies, labeling for different preferences, and clear instructions on menus to let servers know if you had restrictions.

In my time in Portugal, I found that there were no standard approaches that restaurants had to address food restrictions and allergies. I found the culture in Portugal to be a little dismissive of the topic, almost like it wasn’t important enough for them to address. Even when speaking to our API host, Carlos, he said it wasn’t really a “thing” there. I quickly realized that the culture in Portugal just didn’t really have people that were vegetarian or have many allergies. It was frustrating walking into a restaurant and being scared that there wouldn’t be an option for me to eat, whereas in other countries, options were plentiful. I definitely felt like I was more of a burden in Portugal than in any other country due to my dietary preference.

Even when we had our group dinners, it was always made such a big deal with regards to my preference being vegetarian. My experience at group dinners differed greatly in other countries, as I was just another tourist who chose a different option on the menu. In Portugal, I stuck out like a sore thumb and it felt a little embarrassing when the servers had to ask me multiple times what I could/could not eat or when they accidentally gave me the wrong dishes which included meat. Overall, I think that Portugal is only just starting to become a popular tourist destination, and with time they will learn that restrictions and preferences are more prevalent in other countries. I defintiely appreciated how much their culture valued the foods they ate and the traditions they had. I just hope that they will become more open to tourists and offer some more options in the future for people like me.

On our first full day in Lisbon, our group traveled to visit Quinta de Bacalhoa. This beautiful winery and palace tour was nothing like I had ever seen before. In other wineries we have visited such as at San Rustico in Valpolicella and Musee du Win in Paris, the tour consisted of talking mostly about the history and production of wine. While the tours were informational, I felt like I didn’t get a huge grasp on the cultural aspect of how wineries were different in each of these two cities. Quinta de Bacalhoa was an entirely different experience. Not only did we learn about the history of the winery, but we also learned so much about the owner and his love for art. We toured massive galleries of beautiful artwork from 15th century tiles to African voodoo sculptures. Each piece had a purpose and was explained to us in a story-like way. I could tell how much the owner valued artwork, and why it was such a huge part of Quinta de Bacalhoa. Our tour guide at this winery was a huge reason why it felt like Quinta de Bacalhoa was a completely different cultural experience compared to the other wineries we had visited. He was so passionate about this tour and making sure that we understood how much the winery valued the artwork inside it. Unlike at other wineries we visited, he spoke about the most interesting facts and didn’t overload us with information. He also let us have free time to look around at the artwork and different winery rooms, which I found very valuable from a tourist standpoint. He engaged us with questions and was very enthusiastic when we spoke. To be honest, I wasn’t that excited to visit another winery, but this tour guide made the experience something completely different then the other wineries we had visited. 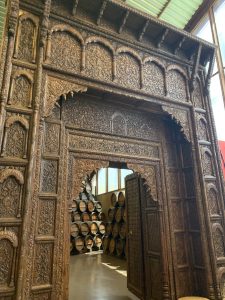 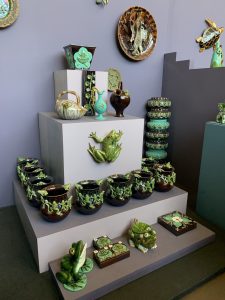 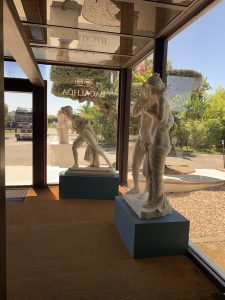 In the second section of this tour, we visited the palace at Quinta de Bacalhoa. This palace was full of history and art, and I felt engaged the entire time being guided through it. Whereas I thought I would be less interested learning about the history of the palace, our tour guide made everything so exciting to listen to. He showed us the highlights of the palace and let us walk through each room after giving us some background information. This allowed us to explore our own interests and see everything that we as individual tourists wanted to see. He also was one of the only tour guides we had who let us stop for pictures along the tour, and even offered to take pictures for us. 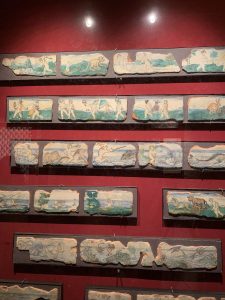 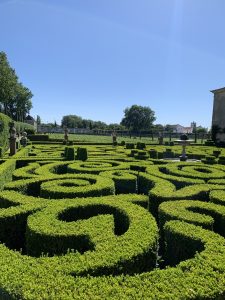 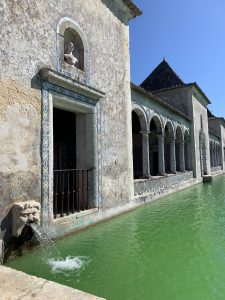 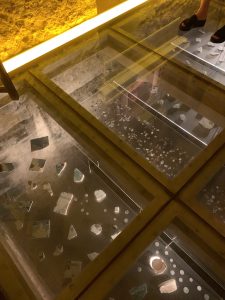 Overall, this tour was unexpectedly one of my favorite activities we did in Portugal. I felt like I came out of the experience with new perceptions about Portugal wineries and palaces, and how different they are in comparison to other sites we have visited!