AMHERST — Growing up in Foxborough, Stockbridge School of Agriculture senior Jordan Tedoldi didn’t have many opportunities to work on farms before arriving in Amherst.

As a new 50-acre farm known as the Agricultural Learning Center begins life a short distance from the University of Massachusetts campus, Tedoldi and other Stockbridge and UMass students will not only have a place to learn about agriculture, but be full participants in planting and studying crops, raising livestock and practicing urban forestry.

“I know it will be an inspirational place for people who grow up away from the farms where they aren’t getting dirt under their fingernails,” Tedoldi said. 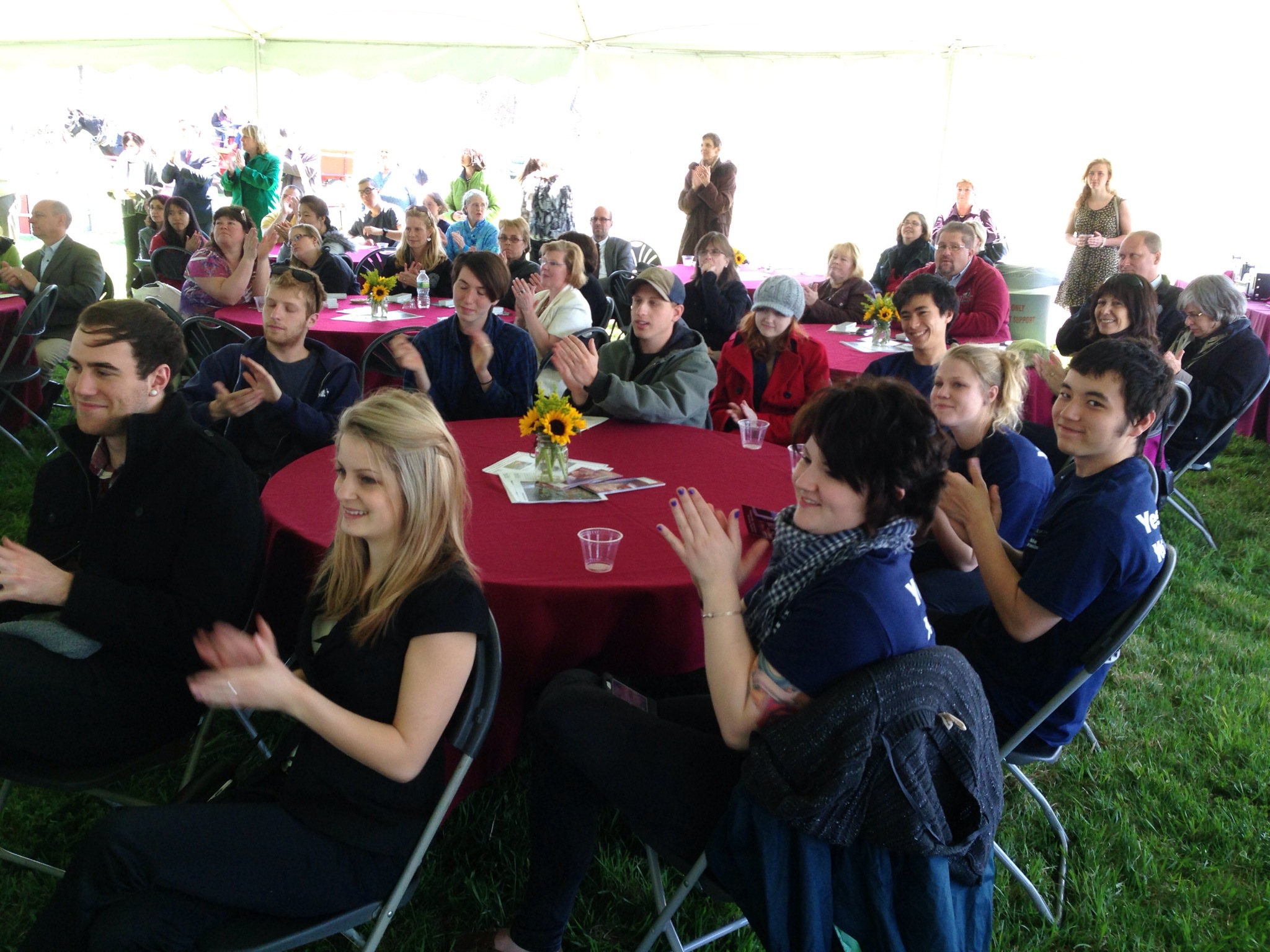 The learning center is in part a response to the rapidly expanding Sustainable Food and Farming major at Stockbridge, which has increased from five to 80 students in the last decade. But the center also will allow other students to pursue studies focused on agriculture, including sustainable practices aimed at growing more food locally, enhancing the food supply and responding to concerns about climate change.

The center was the focus of a celebration and formal ground-breaking Thursday as part of UMass Founders Week 150th anniversary event. But it’s already very much a working farm — plowing began on some of the fields this week, where crops will soon be planted and the first livestock, belted Galloway cows, are expected to be raised. 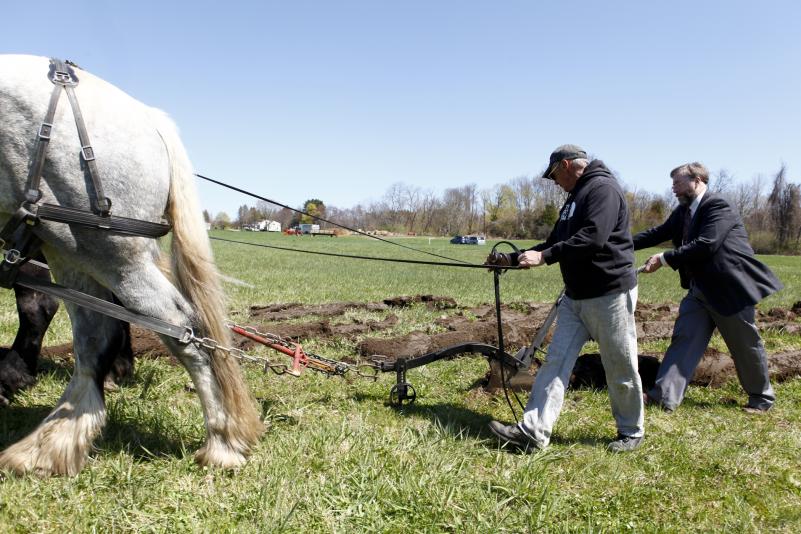 David Bradham, Business manager of Blue Star Equiculture, left, and Wesley R. Autio, Director of Stockbridge School of Agriculture use a horse-drawn hand plow, Thursday, during a groundbreaking at the site of the new UMass Agricultural Learning Center on N. Pleasant St. in Amherst. Photo from Sarah Crosby of the Daily Hampshire Gazette.

Unlike the research farm UMass has in South Deerfield, with its turf and vegetable plots, and the Belchertown orchards, all of which are primarily for professor research and Stockbridge majors, the learning center will feature the entire spectrum of farming in New England — pastureland for livestock to graze, vegetable and agronomic crops, tree fruits and landscaping.

Stephen Herbert, director of the Center for Agriculture at UMass, said the idea is to get students into the active part of agriculture and supplement the training they get in the classroom. “Students will come and use the crops that are grown,” Herbert said.

As an example, Herbert said a student taking a soil and crop management class may get to see how the size of corn ears varies depending on how densely the crop is planted. The student will be able to see the larger or shorter ears and calculate the yields.

Other projects could include learning about planting cover crops, something that is done in campus greenhouses, which don’t always mimic real conditions.

Students are looking forward to these real-life opportunities.

“This center represents everything that I joined this program to do,” said Kaylee Brow, a junior from Northampton.

Brow said she expects the learning center will be an incredible opportunity.

“This is both very important for hands-on education and significant for the university to reinvest in agriculture,” Brow said.

Max Traunstein, a junior from Granby, said he expects the learning center will offer better hands-on experiences than other agriculture-related opportunities now on campus.

“There are some small places on campus to do permaculture, adjacent to the cafeterias,” Traunstein said.

John Gerber, a professor of Sustainable Food and Farming at Stockbridge, agreed, saying this will be real farming, not gardening.

“On campus, there’s really no sense of what farming is like,” Gerber said. “This will be a farm.”

Gerber said he anticipates that some classes will begin at the site this summer, with the year-round UMass Student Farming Enterprise class one of the first to take advantage.

Stockbridge already grows organic vegetables at the South Deerfield Farm, but the learning center, Gerber said, will allow students in both Sustainable Agriculture and Botany for Gardeners classes to actually harvest vegetables that will soon be planted.

“There are 27,000 students at UMass who don’t know where their food comes from,” Gerber said. “Our students will be a lot of the teachers when they walk over here.”

During the ground-breaking ceremony, UMass Chancellor Kumble Subbaswamy said the learning center brings UMass back to the roots when it was founded by Levi Stockbridge in 1863, but is also part of a vibrant food-secure future.

“The new center represents the spirit of our history and the cutting edge of agricultural understanding,” Subbaswamy said. “It will be a showpiece and destination for people to learn about agriculture.” 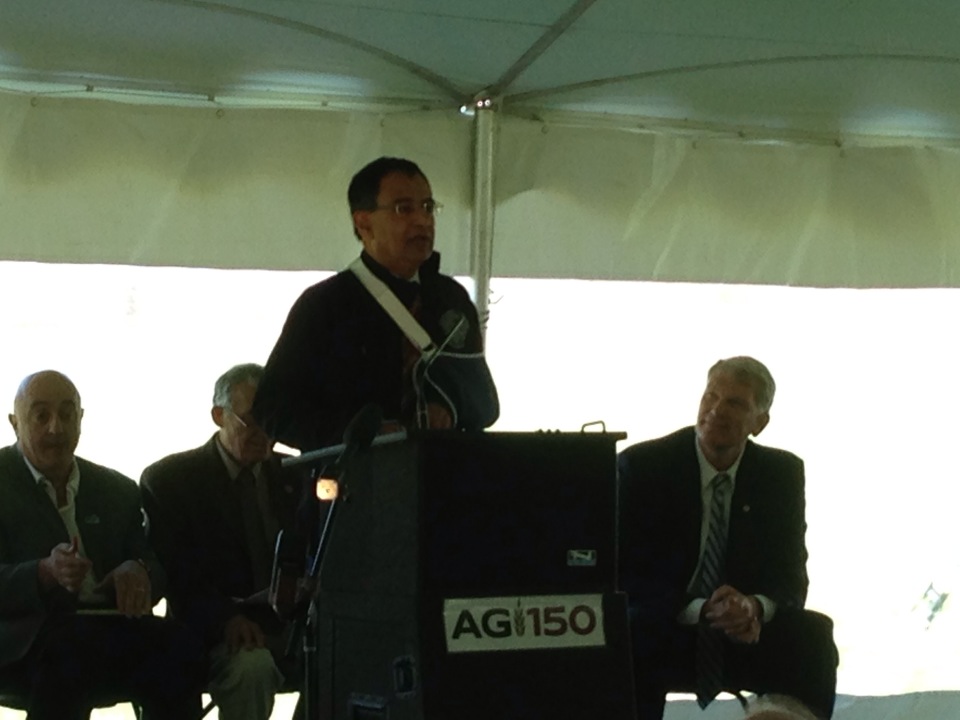 Chancellor Kumble Subbaswamy announced the creation of the new UMass Agricultural Learning Center at the site on North Pleasant St.

The 50-acre site is made up of parts of four former farms, but has been primarily hayfield in recent years.

Alice Wysocki, whose family once owned a portion of the land, said she is pleased to see a return to agricultural production, especially in a sustainable way much like her family farmed it.

Jane Adams Roys, whose father Robert C. Adams ran a dairy farm on the land, traveled from Florida for the ground-breaking.

Roys said she wished her father were still alive to see this project come to reality.

The learning center is expected to eventually have an 1894 horse barn and the Blaisdell House moved to the site from campus, though this depends on financing. Plans call for the ground level of the horse barn to have the horse stalls converted into a 90-seat classroom, while the loft becomes teaching laboratories.

Massachusetts Farm Bureau Federation president Rich Bonanno presented a $10,000 check in support of the project, and has pledged $500,000, and the university is expected to undertake a fundraising campaign to have work done so the center can formally open in fall 2014.