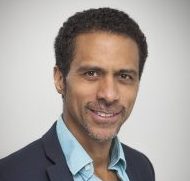 This series of talks is co-sponsored with the College of Natural Sciences Distinguished Scientist and Engineer Series and the Fine Arts Center.

10:00 – 11:00 am
“Surviving and thriving as an under-represented minority scientist in a majority environment”

“I grew up as a person of color in the United States of America, faced with challenges that many had as members of an underrepresented minority group. Here, I will present some of the lessons I have learned that have allowed me to survive as an underrepresented minority ­scientist in a majority environment. I believe the science we conduct and discoveries we make are influenced by our cultural experience, whether they be positive, negative, or neutral. This has happened to me, and the people I have worked with. I will present examples from molecular biology, to neuroscience, to genomics. I believe that the negative aspects of these influences will be helped by genomics showing how related and integrated all humans are to each other.”
Associated reading: Jarvis, E.D. Surviving as an underrepresented minority scientist in a majority environment. Molecular Biology of Cell. (2015) Vol 26, 3679-3891.

Bodies at Risk is a series of creative conversations between BIPOC performing artists, educators, activists, and other experts working to shift American society’s understanding of the racialized body and social justice. These events aim to engage, move, and surprise audiences through artistic demonstration and intellectual curiosity. Artist and audience chat included in each event.

Erich Jarvis was a high school student at the School of the Performing Arts in New York City. Upon graduation, he had to choose between continuing as a dancer and becoming a scientist. He chose science. Jarvis’ current work involves the study of neural and genetic mechanisms of spoken language using song-learning birds and other animals. Larissa FastHorse is a Sicangu Lakota playwright, director, and choreographer whose work radically engages Indigenous collaborators to explore onstage representations of the joys and challenges that the Native community faces.